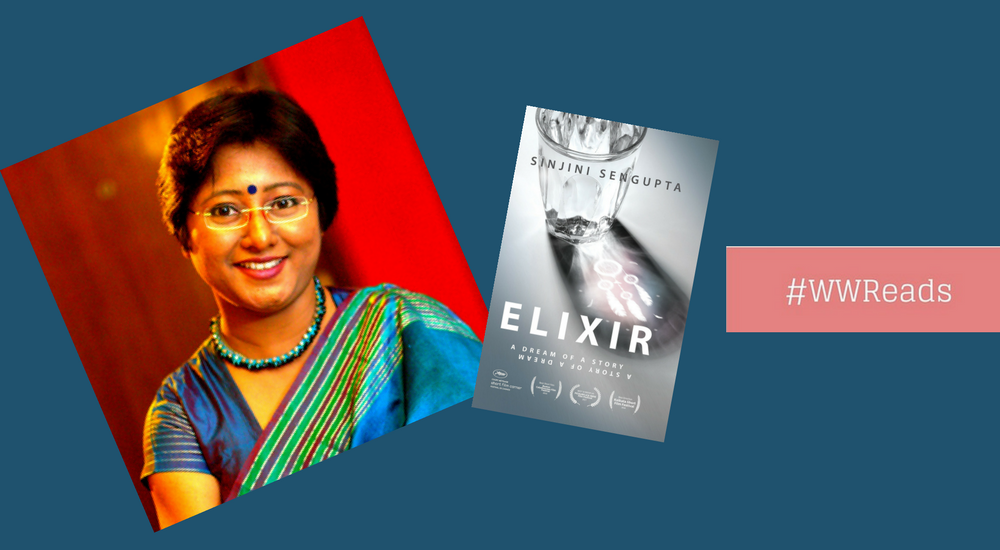 ‘Elixir’ By Sinjini Sengupta Is A Truly Exhilarating Read [#BookReview]

Elixir is the debut novel of author Sinjini Sengupta; it plumbs human emotions, finding an echo in the reader.

…The desire melts down the fear, the stones of the grief. The icebergs, they are melting…Now, that she is crying. Her tears are washing her down, bathing her clean of her prejudices, breaking her open off her own cage she had made herself for so many years, lifelong. There, she is changing. There she is braver, She is braving it, yes. Look, she is crying!” – Elixir

Have you ever tried living in your dreams? Have you ever felt that your dream is better than the reality of your life? Or, have you ever felt that a dream is taking over your real life, consuming you, literally with every passing day? A dream, something so mundane, is actually catapulting you to a whole new world, a world that you have perhaps begun to love, live, long for and experience! Something that has become a reality in many ways!

Well, Elixir, author Sinjini Sengupta’s debut novel, published by Readomania, is all about that – a dream. Elixir is a story of a dream, a dream that is far more exhilarating than reality. A dream that lends a new lease of life to a woman and then, perhaps constructs her end too. Elixir will make you take a seat, talk, ponder and gulp copiously what love, pain, angst, loneliness and, perhaps, unalloyed happiness is all about.

Elixir revolves around Manisha Roy. Manisha had lost her mother at birth and was brought up by her father and grandmother. This void though, remained unfilled all her life. She grew up to be a beautiful girl, academically brilliant and professionally successful. She married Amit Roy and her marital life was like any other in an upstate urban set up with luxurious galore.

But, somewhere she remained bereft. And, one day a casual visit to a cafe changed the entire course of her life in a surreal way. Manisha dreamt about the man she saw at the cafe, and thereafter dreamt of him every single time she slept. Did she really see anyone at all? Slowly, this dream became the naked reality of her life, overlapping the real and the dreamy world in a bizarre way. Manisha started living a parallel life. Hypnotic, in a way.

On one hand, a clandestine dream that promises pure bliss and inner contentment with the man she was hopelessly falling in love with. And, then her real life with Amit, office and other basic banalities of being Manisha Roy. However, in no time, she finds herself choosing her dream over reality, thus inviting a dreadful and agonising end. Did Manisha manage to save herself out from this dark chassis of the human mind, or she succumbed to it, is what Elixir is all about.

Elixir keeps you embraced with its scintillating narrative throughout. It seamlessly touches the deep parched knots of a woman’s vulnerabilities inhabiting in a tenantless heart. With rain, sea and shores backing her narrative steadfastly, the author chooses to narrate this piece with a subtle dash of melancholy running all along, which works well. Elixir is as much within Manisha Roy, as much it is about the cacophony of the world around her. And, the author has handled this unevenness with aplomb. Needless to say, some brilliant imageries lend an everlasting effect on the narrative that lingers around you even after you have closed the book. A commendable effort by a first-time author.

Pick up any character from Elixir, and you know deep down ‘who’ he/she is without any direct mention. I would like to believe that the author probably had picked up her finest brush to paint out perfect images of the characters she envisaged. Leave aside Manisha or Amit, even the minor ones like the nurse Lobo, driver Singhji, cook Bimala, Balky or Amma for that matter, you know where they are coming from and what they are all about. And Manisha, you feel her skin to skin, quite literally, trust me! Manisha is such a real portrayal that you will find a strand of her in you, hidden, peeping through suddenly, in sobs and smiles. You may not be able to identify with her always, but a part of you will cry for her till the last word of the story. And, that I feel is nothing but the outcome of an amazingly skilful characterisation.

Ornate, measured and words sprinkled deftly keeping in view the need of the situations. One of the hallmarks of Elixir is the definitely the language that was on display. But, what caught my attention apart from this stunning exhibit of words and phrases, is the glimpse of poetess Sinjini Sengupta, who popped up every now and then.

Take this- “…A pitch darkness engulfs the space, the same black as the distance of the stars, eons of light years away…and, from within the abyss of past, a familiar sound hits the air. Sticks of matches, rubbing, striking up the brown dots into flames. A candle lights up somewhere, against the soft beats of the raindrops. A delicate flame flickers through the shining darkness, one that can only light up, and not burn down….”

I felt, there is a subtle lyricism in the language that the author used, which gives the narrative a different rhythm, making it ebb and flow with time, people and emotions. A beautiful attempt!

It is a fact that a story like Elixir that churns the inner chasm of human emotions cannot stand without tight editing. And, Elixir does get some crisp edits for things flow seamlessly. It is yet again an effortless and sincere contribution to making Elixir what it is.

No artwork is perfect, and in that sense in Elixir too, there are pockets, which could have been a shade better.

Elixir is a painful, yet a beautiful experience. It is as much a heartwarming read, as it is a heartbreaking one. It is a story that will stare dart at your face and ask some quintessential questions about love, life and marriage. Its unmistaken beauty lies in the depth of the characters and their emotional clamour, which is honest. There is nothing right or wrong. You live to feel the world around and also, you need to feel the world around to live. Elixir is a stupendous debut by author Sinjini Sengupta. Her deftness with the dynamics of human emotions and sensibilities is par excellent. Grab this novel now, and gift yourself an experience to cherish. Elixir, and just that!

P.S: Did I just say that this is one of the best debuts from the house of Readomania?

If you’d like to pick up Elixir by Sinjini Sengupta, use our affiliate links: at Amazon India, and at Amazon US.

Top image via Sinjini Sengupta and book cover via Amazon

An avid reader, a blogger, a book reviewer, a freelancer writer and an aspiring author.

How I Reached For My Dreams And Refused To Let Go

“Women Have Always Had To Move Against The Tide!” Says Tanuja Chandra, Writer And Director

Will Aashi Find The Happiness That Seems To Be Playing Hide And Seek With Her?