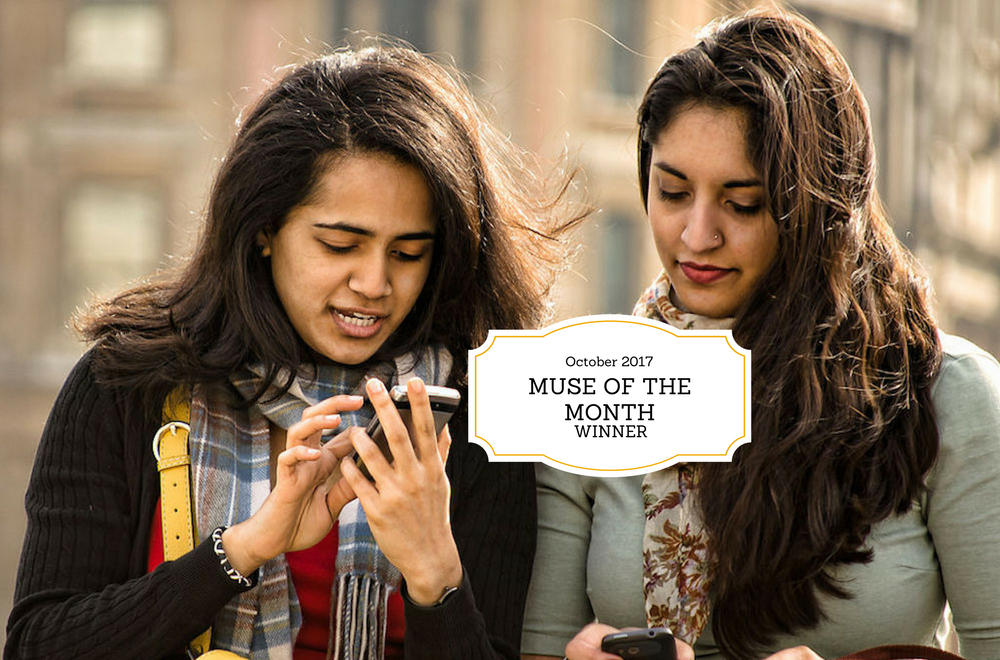 The Wallflower And The Butterfly [#ShortStory]

“Why are you making excuses for them Bhavee? We’ve warned them so many times, what does it take for them to learn their lesson? Your dead body?”

Here is the second winner of our October 2017 Muse of the Month contest, Roopa Prabhakar.

The Wallflower And The Butterfly

Dipti scanned Bhavana’s shivering body – she had a broken leg, a punctured lung and her face was swollen beyond recognition. In addition to this, she was running a high fever and was delirious. The medication was doing little to alleviate her pain. The doctors had assured Dipti that her friend was in no danger and a full recovery was possible because she was young and healthy. But no assurances could calm Dipti down. She was boiling over with rage and all she could think of was the various ways she could inflict pain on the individuals who had done this to her friend.

Bhavana was her childhood buddy, a sweet, shy and beautiful 19-year-old girl, whose reticent nature was often mistaken for arrogance. Most of the boys in her college were besotted with her but they could never strike up a conversation as she would turn brick red and look so uncomfortable that they would apologize and beat a hasty retreat. Many approached Dipti and begged her to introduce them but it made things worse as Bhavana would hide behind her friend and giggle uncontrollably.

Dipti on the other hand was an extrovert with a mouth that only stopped moving when she went to bed. She could talk up total strangers and have them take her out for coffee the same day. She was fearless when it came to confronting bullies and often fought most of Bhavana’s battles. They were nicknamed “The Wallflower and the Butterfly” by their friends but it made little difference to them.

Dipti had slept in the hospital room the entire weekend and it was only on the insistence of Bhavana’s mother that she decided to head back home. She was back the next morning to check on her friend.

The nurse came in to change the drip dosage, she said her friend slept soundly for the first time last night and her recovery would be quick from now on. Dipti thanked her and sat down to wait for her friend to wake up. The image of the biker gang wearing Halloween suits circling Bhavana flashed through her mind. She knew who they were, this was not the first time they had done this. They were a bunch of spoilt kids who lived on Bhavana’s street and felt they owned every girl living there. She had got into a fight with them the last time she visited Bhavana and had even threatened to file an eve-teasing case but Bhavana had always managed to pacify her.

Dipti shook her head vigorously, hoping the movement would arrange the thoughts that were racing in her mind so that she could plan out the next course of action. She cursed herself for not being able to accompany Bhavana back home that evening. Both of them had volunteered for the annual college festival but Bhavana had finished early and had waited for her for an hour before heading back home. Dipti had no clue when Bhavana had left and had decided to drop by her friend’s place to spend a couple of hours there.

Bhavana’s house was located in one the Bangalore’s best residential areas, the house was her grandfather’s and the tiny house with a garden in front was dwarfed by huge mansions on either side. Her middle class family did not have the means for renovation and they were constantly hassled by real estate agents with attractive offers. Since traffic on the main road leading up to her street was abysmal she always drove through the narrow secluded side roads convinced that a helmet with an androgynous jacket was protection enough. But the biker gang were familiar with her disguise and would stake out the area until they spotted her kinetic Honda.

On that fateful evening, Dipti spotted Bhavana’s Kinetic Honda a kilometer away and was debating whether to hit the gas to catch up when she heard the deafening roar of bikes. There were around 4-5 bikes, some with pinion riders, closing in on Bhavana with the boys yelling and doing various stunts. Couple of them moved ahead, turned around and headed towards her with their front wheels up in the air. Dipti slowed down and started searching frantically for her phone as she knew she could not take them on herself. The boys circled around Bhavana frightening her with their skeleton bodysuits and raucous laughter. Dipti dragged her eyes away to dial the police helpline when she heard a scream and the sound of bikes racing away. She saw Bhavana’s bike lying on the edge of the road which had a sheer drop into an excavated site. Abandoning the helpline call, she dialed the ambulance and Dipti could still recall the tortuously long minutes she waited for the ambulance to arrive as she stood helplessly by the side of the road.

Bhavana’s eyes fluttered open and she smiled when she saw Dipti.

“Is it that bad Dips? You should see your face, am I dying or what?” Bhavana joked, a sure sign that she was getting better.

“You could have Bhavee, the docs say you were lucky. I’ve already informed the police, if you are feeling ok I can ask them to come here so that they can talk to you and file the FIR?”

“Is it really necessary? Dev told me that they had come our house to apologize but my idiot brother and his friends drove them away with hockey sticks.”

“Dev did the right thing. Think about it Bhavee, they left you lying there and ran away. You could have died” Dipti fumed.

“They must have spotted you and knew you would help me out. Forget it, I am tired and fed up with these boys, I don’t want to fight with them anymore” Bhavana sighed and closed her eyes.

“Why are you making excuses for them Bhavee? We’ve warned them so many times, what does it take for them to learn their lesson? Your dead body?” Dipti couldn’t believe her friend was willing to let go so easily.

“I’m not dead right? I’m going to make a full recovery, you heard what the doctors said. I’m sure the guys have learned their lesson, mom and dad also think the same.”

“This is unbelievable! I think the medication has messed with your head!” Dipti spat out.

“I’m not you Dipti, I hate doing all this, the questioning from the police, filing the FIR, they will put them in jail, my parents will have to face their parents…….I can’t do all of this…just let it go please,” Bhavana pleaded.

“You can’t give up now. You have to keep on fighting. This fight is not about you. It’s about justice. What if they had done the same thing to me and if I had died, would you have walked over my dead body and moved on?”

“Dips, don’t be over dramatic!! Of course I would have fought for you.”

“Bullcrap! You have to first stand up for yourself before you stand up for others!” Dipti stormed out of the hospital room.

The next morning Dipti got a call from Dev.

“Bhavana didi asked me to call you, she said she wants you with her when the police question her”

“But I didn’t call the police Dev, did you do it?”

“No, Didi called them herself, she spoke to mom and dad and told them that she will be filing a case against those bastards, I was also shocked when I heard it.”

“Tell your didi that I’ll be there as fast as I can. Bye Dev” Dipti smiled and gave a whoop of joy.

The Wallflower was coming out of her shell, she just needed the Butterfly to hover over her for a little while.

Roopa Prabhakar wins a Rs 250 Amazon voucher, as well as a chance to be picked one among the top winners at the end of 2017. Congratulations!

Roopa Prabhakar describes herself as a mother, a working woman, a closet feminist and blogger.

Remember Yesteryear Actor Swaroop Sampat? Here’s The Inspiring Way She Has Reinvented Herself!