We Need An Item Number Or Superstar Bot In Bollywood. Here’s Why!

Given the measly roles Bollywood often gives women, this satirical take envisages bots taking over some of the cringe-inducing work!

Given the measly roles Bollywood often gives women, this satirical take envisages bots taking over some of the cringe-inducing work!

The #MeToo movement arrived like a whirlwind in Bollywood a few years back and bowed out as quickly as it came. Bollywood was certainly not ready nor interested in it.

We heard horrifying accounts about Bollywood’s most sanskari baapu and before we could digest it, he appeared in a semi-hit movie and all was forgotten if not forgiven.

A few courageous women came out with painful memories but lack of evidence and the huge time lapse between the alleged acts went against them. No amount of testimonies from veteran TV actors could make the claim stick.

A little later, #MenToo resumed with men complaining that cases were registered by revenge-seeking women out to destroy relationships, careers and lives. A couple of illegitimate #MeToo cases overshadowed hundreds of legitimate cases. The sanctity of Blackstone’s ratio – “It is better that a hundred guilty persons escape than one innocent suffers” was preserved.

So where do we go now? We know for a fact that women have been at the receiving end of abuse by men in power in all professions but it is equally true that some women may use the #MeToo movement as a weapon when they feel they are not getting their due at the workplace. Bollywood by the very nature of its business gets to see both instances abundantly.

The recent accusation of Payal Ghosh on director Anurag Kashyap has raised many such questions. Kashyap has huge support from the film industry including ex-wives and colleagues. Payal on the other hand has a lone Kangana as her supporter and even her encouragement is questionable, considering the antagonistic relationship between her and Kashyap.

However, can any of the women from Kashyap’s side vouch without a shadow of doubt, that in a single weak moment he could not have indulged in such behaviour? Should we give credence to the stature of the accused and the number of women backing him up? If we take that position, then most cases will be dismissed. And if do not, we might end up sacrificing the reputation of a director famous for movies with a ‘feminist’ outlook.

In a movie industry like Bollywood where many accusers are small time actors, who are yet to make it big, these accusations rarely stick, and they soon find themselves out of work or slapped with a countersuit. In the end it just does not seem worth the stress, infamy and the drain on their resources- time, money and energy. One can probably get some sleep on an uneasy conscience rather than an empty wallet.

One comment from the outspoken Kangana who is lately personifying the term ‘loose cannon’ hit the mark. Responding to the famous ‘Thali’ remark from Jaya Bachchan, she claimed that the Bollywood thali only contains 2-minute roles for female actors along with an item number.

She is right – as we all know, there are quite a few actors who have achieved superstardom just on item numbers and armed with exactly three expressions – chirpy, sad and pouty. And it is for this brand of superstardom that women have to ‘compromise’ with directors, co-stars and producers.

What if we take this out of the equation? Have an AI Item Number Bot that can do all the suggestive moves and mouth all the puke-inducing lyrics without complaining and perfect the dance moves in just one take.

How will the male actors emote, you ask? Well most male actors also come with an equally limited range of expressions so we can replace them with an AI Superstar Bot with the added advantage of being able to do its own stunt work and moreover, it can work 24/7 without the need of any ‘white’ substances for alertness, extra energy etc. Hopefully in such movies the story will be the superstar and the writer will finally get his/her due.

The world of fashion has already started a new trend in deploying virtual models. Digital supermodels such as Lil Miquela and Shadu have their own Instagram accounts with followers in the millions. With luminous skin and symmetrical features, it is hard not to fall in love with them.

Maybe the future of the movie industry lies in employing people with emoting skills who can deliver nuanced performances and we can leave the perfect choreography with the three expressions to the AI Bots.

Top image is a still from the Hindi movie Suraiyya 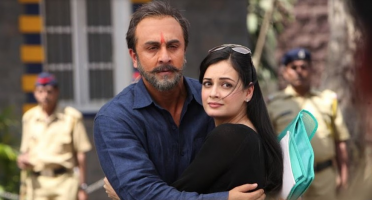