Being A Woman Politician In India #WomenOnTheMove 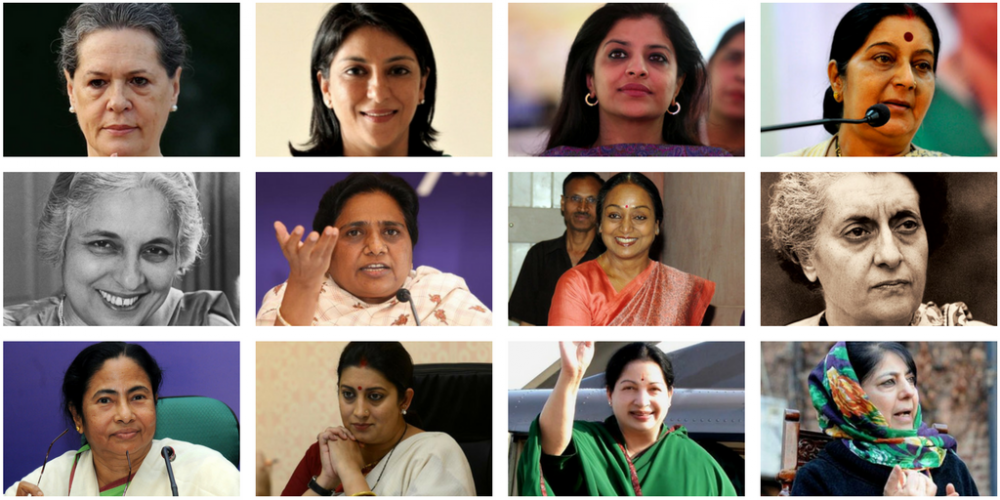 Conventional politics has always been dominated by men. Women and their issues were largely ignored given the dismal numbers of women representatives in the political circle. However, in recent years, the world has witnessed a phenomenal rise of women politicians across countries and continents. The growing numbers have resulted in an increased addressal of women’s issues and passing of laws aimed at empowering women.

Women suffrage came early in India. Indian women never saw a mass political movement, unlike Western countries, for getting their voting rights. Women had always played an active role in politics in India. However, the post independence Parliamentary reforms helped Indian women to achieve an unprecedented political break­-through — reservation of seats in gram panchayats and other public bodies. The reform accentuated the role of women in Indian politics. They participated in voting, ran for public offices and political parties at lower levels more than men.

That said, although rural governance saw a massive increase in women representatives, the numbers in comparison to men in State Assemblies and Parliament were extremely low. While the global average for Women in Parliament stands at 22.4%, India has a meagre 12% representation.

Last week, we had our weekly #Womenonthemove chat over at Twitter, where we discussed the factors resposible for this dismal picture, despite the reservation, of women politicians in India. This is what they said.

The challenges in politics – are they different for men & women?

@womensweb : No, its difficult for women to be leaders at political front than business.

I think tough for anyone in india but harder for women. Still very much the ‘exception’ #womenonthemove https://t.co/3w5DBIIimt

@womensweb the challenges are always lopsided in politics and life.

@editorsahiba @womensweb probably also because politics is dynasty based and prefers male heirs.

@womensweb #WomenOnTheMove Yes. They are expected to be tough yet ‘feminine’ in the traditional sense. Should not be mutually exclusive!

@womensweb Yes they are. Women in general are up for scrutiny much more than men, that extends to politics too.#WomenOnTheMove +1

Also at grassroots level I think it must be harder for women simply to travel safely, move in crowds etc https://t.co/3w5DBIIimt

Yes. parties give fewer women tickets since they are perceived as less likely to win #WomenOnTheMove https://t.co/iXYjkdoXEg

How different are the challenges for women from being a business leader to a political leader?

@womensweb the meaning of ruthless changes drastically from biz to politics.Else we would see a larger women rep in politics #WomenOnTheMove

@womensweb Business gives her the respects she needs from Day-1 but in politics she is been treated adversely if not from a known family.

@womensweb Not entirely,in a sense the Corporate world is ensconced in a shell, #WomenOnTheMove as a politician,a billion fangs bared +1

How to survive the challenges?

@womensweb #WomenOnTheMove A lil shaken by #Ammas stories of 1980s,shocking only the #thickskinned survive & boy what a rockstar she was +2

@womensweb #WomenOnTheMove Businesses, politics – all based on the male model of work. Maybe time to be more inclusive?

@womensweb Certainly #WomenOnTheMove bring the right perspective,all the same they also need to fight hard to be heard

Will an increase in the number of women politicians make any difference?

@womensweb #WomenOnTheMove While this is expected, it might depend upon the politician herself – her policies and actions.

A3: It does if the women politicians are smart and fearless. They tackle women issues more vehemently. #WomenOnTheMove https://t.co/0DaVzIKR7u

@womensweb it’s not guaranteed as a woman can be patriarchal. But it can really help if the woman feels strongly about women empowerment.

@womensweb yes! Women understand women’ issues better & are more likely to come up with appropriate steps to tackle them. #WomenOnTheMove

What should be done to increase women political leaders?

@womensweb safe & secure equal opportunities from the grassroots, no mere signatory for men behind them, non-political background encouraged

A4: Mandatory seats for women. Not just tickets, but positions/rights/freedom and support to work fearlessly. #WomenOnTheMove https://t.co/UEsPWT19hm

@anupamaskapoor @womensweb lots of pro-women in politics laws already there,implementation is where we falter as a nation

Politics is the only place where the term ‘Reservation’ (for ‘Women’) makes sense. @womensweb #WomenOnTheMove

@womensweb equal opportunities and encouragement. Also awareness needs to be spread as a lot of them do not get to know much about politics.