As You Write ItCampaignsReadSocial Issues

"Men were the masters of their destinies and their bodies,... a widow needed to be punished for her misfortune of outliving her husband." A short story. 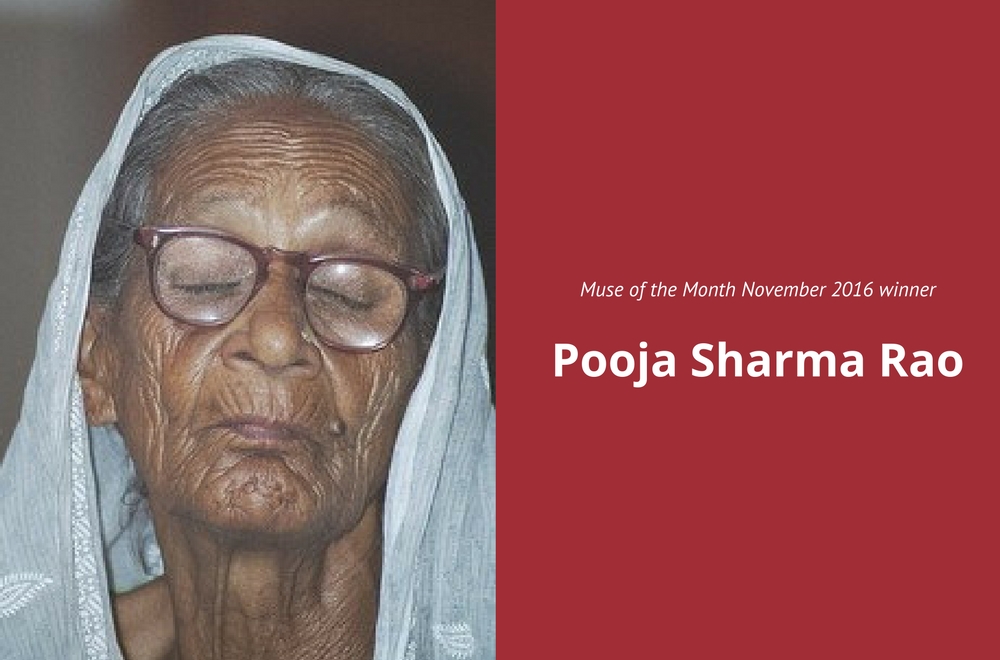 “Men were the masters of their destinies and their bodies,… a widow needed to be punished for her misfortune of outliving her husband.” A short story.

Here is the first winner of our November 2016 Muse of the Month contest, Pooja Sharma Rao.

In The Quest Of Liberation

Kusum rested her old and frail body in the corner of one of the bogies of Howrah-Varanasi Express. The general compartment was as usual overcrowded; she had to sit on the floor throughout, clutching at her potli of another pair of clothes and a few rotis, while her son was hanging around all night.

How she wished to evade this journey, this last journey that was taking her away from her home and family forever.

The train had halted at a junction at dawn; all kinds of vendors were hawking their goods. Kusum lay huddled like a lifeless object. Her son had gone out to buy bidi and chai.

A few minutes later he shook her and handed over half-a kulhar of limp watery tea. Adjusting himself with three other men on the edge of the seat near her he said, “Amma! In three hours we will be at Varanasi junction. You are soon going to be at the city of liberation. Jai Bholenath!”

Kusum did not what to say about that. The storytellers back in her village sung songs about Kashi, also known now as Varanasi or Benares- the city that shined the city of light, the city of Moksha.

But she also knew that for widows like her it was a pilgrimage till death. Though her sons had assured her that they would regularly visit her, pay her some maintenance and ensure that she remained safe and healthy in some Widhwa Ashram, she could see the deception in their eyes.

The fact that her three sons whom she had raised and educated by working hard as household help for decades in cities now did not want her in their homes had broken her heart as a mother. Her shaking hands fumbled the edge of the pallu of her Sari; there inside the firm knot were four tablets of Sulphas- a pesticide her sons used in the fields.

Kusum knew she could not live away from her home and her children now, so she had resigned to her fate. Death it would be for her at the Ghats of Varanasi.

Two days later after depositing her like an abandoned antique at an ashram near the famous Sankatmochan temple her son had returned home.

The older residents had told her all the rules of widowhood again- no meat, onion, garlic in food, never let your hair grow more than a close-crop, always keep your head covered, no colourful possessions ever, live a life of penance.

They were 10 of them in a small room with a single barred window. They had to sleep in a long row across the floor on a single threadbare rug. Dull white saris, hanged on a tattered washing line, only two bare meals a day consisted of dry, coarse rice often served without any curry or gravy.

Kusum fumbled with the Sulphas tablets and the idea of suicide every day, but never could generate courage enough to end her own life. Also even worse tales of other widows around her of abandonment, humiliation, disease and sometimes even forced prostitution made her question her own pride as a ‘mother of three sons‘ in this society.

Men were the masters of their destinies and their bodies, as fathers, husbands, brothers and sons. A widow needed to be punished for her misfortune of outliving her husband. They were ostracised in homes and villages, considered inauspicious and deprived of all inheritance.

In her first two weeks in the holy city she had heard numerous gruesome tales of torture and inhuman sexual exploitation of younger widows at the hands of ashram officials, shopkeepers, landlords, politicians and the police.

The older ones sang bhajans for paltry money and begged when pressed for survival. She was told death of a widow was even worse than this life as ‘living Sati’, she was told the staff of the ashram did not want to spend any money on their cremation and last rites and often discreetly discarded off dead bodies in gunny bags in the river itself. So much respect for dead mothers in a country that worshipped ‘Devi’, the hypocrisy made her cringe.

On a warm sunny afternoon as she sat at the stairs of the famous Manikarnika Ghat seeking alms for sustenance, Kusum thought she saw a familiar face, leading a group of young people and setting up a kiosk. Her roommates told her that they were the NGO people who ran health check-ups etc. for the destitute and widows.

She looked again, peeping from the corner of her white sari; the lady indeed looked like Reema jiji. The eldest daughter-in-law of the Pathak family for whom she had worked in Delhi for more than a decade before moving back to her village with her ailing husband.

But this was also now almost twelve years ago she wondered. Reema jiji’s son would be almost 25 now, she estimated. Kusum looked again for any visible signs of Reema’s marital status; she wasn’t wearing any sindoor in the parting of her hair, or any red bangles, mandatory for all married women. She wondered, so had her husband Mahendra bhai passed away too and just like all other widows she had come to spend the rest of her life at Varanasi.

Meanwhile the kiosk had been set up and they had started distributing free medicines. She too was tugged along by her roommate to the queue. Timidly she moved closer. Reema jiji’s grey head was bent on a register as she asked, “Name, Age?”

As she muttered her name, Reema looked up and after staring into her wrinkled and freckled face for a few seconds, immediately enclosed her in a warmest hug she had experienced now in a long-long time.

She asked about her whereabouts and promised to come to meet her the next day at noon at the Panchganga Ghat.

When they met, Kusum was shocked to hear that Reema’s husband was very much alive, but had brought another woman to live in the house years ago, and that her son chose his profligate father over her. He had chosen his inheritance from the family over his mother’s honour.

She was even more shocked to know that like her Reema too had moved to Varanasi to kill herself, but realised her death would mean nothing to anyone, but her life could be made useful for other women. She could use her pain and her education to help others and also seek solace.

Mrs. Reema Pathak- was no longer just a wife or the mother of a son, or an abandoned woman. She had reinvented herself, had made this city her new home and the widows here her new selfless family. She was part of a social organisation that provided vocational training to younger widows and offered support and assistance to older and sick ones in their last years.

Kusum opened the knot at the edge of her sari and threw the Sulphas tablets into the Ganga. A few months later she was training other widows to stitch costumes for deities and earn a respectable living.

She now lived with dignity with Reema and joined hands with so many others to take their destinies in their own hands.

In a few days it was the festival of colours, Holi, and after centuries of colourless life, all the widows along with Reema and Kusum were preparing herbal colours to break another taboo that chained them. They would play in colours like everyone else and reclaim their identities as living beings even after their husbands had passed away.

They now knew that if they were free in their minds, anywhere could be home, and Varanasi could actually be the city of liberation for widows too, as it was deemed to be.