The expose on widows in Vrindavan reveals the status of widows in India: How has the media addressed this issue? 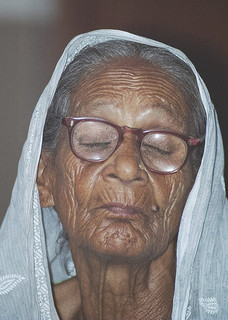 On June 23, International Widows Day, NDTV broadcast a documentary on the widows of Vrindavan, who must beg or sing bhajans for a single meal. Guest blogger Rina Mukherji reviews the film and comments on how the audiovisual and print media have looked at the way society treats women once their husbands die.

Rina Mukherji is a senior Kolkata-based journalist who has been writing extensively on various aspects of sustainable development since more than two decades. She also holds a doctorate in African Studies, and has been the recipient of several academic and media fellowships. This post was first published at the Network of Women in Media, India (NWMI).

Widows of Vrindavan, a hard-hitting documentary on the abject humiliation faced by widows who are dumped in this temple town and must beg for a living, was broadcast on NDTV on June 23, International Widows’ Day.

The city of Vrindavan was supposedly revived as a pilgrim centre by Chaitanya Mahaprabhu, the Bhakti saint from Bengal. Today, it is infamous for being home to thousands of destitute widows. It is ironical that 85 per cent of the widows in Vrindavan are from Bengal, a province that triggered the Indian Renaissance in the 19th century by demanding a better deal for women. When Raja Rammohan Roy’s campaign to abolish sati started having an impact, Bengal was faced with the problem of thousands of (upper caste) child widows with no one willing to take care of them. Ishwarchandra Vidyasagar tried to solve the problem by advocating widow remarriage. However, few men came forward to marry these widows. Widow remarriage remained confined to the annals of the Brahmo Samaj and the social reformers of the Bengal renaissance. Sanatan Dharmi Hindus rejected it outright. To this day, very few Bengalis accept it.

Widowhood has traditionally been dreaded in India, not only because it means a lowering of the status of any woman within the matrimonial home, but also because it is accompanied by several indignities. Widows in eastern and northern India must abstain from all non-vegetarian food — the staple of every meal in the region — and restrict themselves to just one meal a day. They must give up wearing nice clothes and jewellery, and take to coarse white saris. They may not socialise, and must not be seen at weddings and celebrations, lest they bring ill-luck.

The nightmarish living conditions of the widows in Vrindavan, shown in the documentary, shake our belief in humanity to the core. Most of the so-called homes run for these women do not even have running water in their bathrooms. The administration does not bother to provide them food. The women must beg or sing bhajans in the bhajan ashram to earn their only meal of the day. Once they become old and weak, they are confined to a corner and left to die.

It is not as if all these women hail from poor homes; a few come from very rich families who wished to deprive them of their share of property.

In the past, widows’ heads were shaven, lest they looked attractive. The idea was to keep a strict tab on their sexuality, so that they should never have the opportunity of remarrying. Even otherwise, remarriage was frowned upon, since it would entail a division of the family property.

Although urban India has generally moved ahead in this respects, widows continue to be ill-treated within the family, especially in the smaller cities. Unable to fight back if they are without children, or uncared for by children, some widows prefer to take the road to Vrindavan.

In May 2012, the Supreme Court took the first step in addressing the plight of these women by ordering a roster to be prepared on the widows here. But we must ask ourselves: why should a woman — whose husband has predeceased her for no fault of hers — be subjected to the worst indignities and deprived of the right to all that she has enjoyed, and should continue to enjoy?

In South Asia, and especially in India, a major media campaign ought to be initiated to stir people’s social conscience regarding the human rights of a widow. In a country where a woman continues to be identified on the basis of the social status of her husband, a widow is looked down upon the moment she is deprived of the man who ruled and defined her lifestyle.

There has been intermittent media attention paid to the subject. Water, part of film-maker Deepa Mehta’s ‘Elements’ trilogy, focused on the exploitation of young widows in pre-independence India, as seen through the eyes of an idealistic young man fighting for India’s independence. Sunil Gangopadhyay’s novel Shei shomoy (Those times), made into a Hindi TV serial, Yugant, also touched on the condition of widows in 19th century Bengal, and the circumstances in which Benares and Vrindavan had degenerated into cities of sin. But these dwelt on times past, and gave one the feeling that with education, and Indian independence ushering in a welfare state, the problems of widows had disappeared.

Recent times have seen documentaries made by television channels, as also articles and photo-essays in the print media. The NDTV documentary mentions The Hindu’s reports that highlighted the plight of these widows, and the ghastly conditions they have had to put up with in so-called shelter homes. Aarti Dhar’s article ‘Dignity denied even in death for Vrindavan widows‘ in The Hindu (January 8, 2012) quoted the District Legal Services Authority report based on interviews with the inmates of government-run shelter homes. According to this report, in the absence of funeral facilities at homes, sweepers removed the bodies in jute bags and cut them up for disposal in the river.

Her writing drew flak from religious and social organisations in Vrindavan, who accused her of sensationalising the issue. Yet, to date, there has been no condemnation by any religious leader or organisation of a practice that makes outcasts of widowed women in Hindu society. Neither have politicians bothered to ask why the government’s pension schemes for widowed women, such as the National Social Assistance Programme, Antodaya Scheme and Food Money Scheme, are not followed in shelter homes run by the union and state governments.

More recently, Gulf News correspondent Karuna Madan wrote of the sexual exploitation of helpless widows, and rampant prostitution in Vrindavan (‘Sentenced to life in the City of Widows’ , June 23, 2012). Photojournalists like Claude Renault and Fazal Sheikh have let their photographs do the talking.

By far, Fazal Sheikh’s online exhibition Moksha (www.fazalshekh.org) is the most moving, using the perspective of aged widows with their dim eyesight to capture the essence of a cruel system.

June 23 was declared International Widows’ Day by a UN General Assembly resolution. This move was initiated by Raj Loomba, who set up the UK-based Loomba Foundation; his mother became a widow on this day. The foundation was set up to care for widows the world over. One hopes that this film, which depicts the poignant tales of the widows of Vrindavan, encourages more efforts to do something for their welfare.

An independent journalist with over 27 years 'experience in the print and online media, and a doctorate in African Studies, Dr Rina Mukherji is the recipient of numerous national and international academic and media fellowships read more...

Women In The Informal Sector (Like Your Domestic Help) More Likely To Be Sexually Exploited. Here's Why

Sexual Harassment At Work? Read On To Find Out About Updates In The Law To Deal With It

Why Don't The Vrindavan Widows Stay At Home?