Working for a BPO as a woman isn't easy, even if it gives many educated women purpose, confidence, and financial independence. 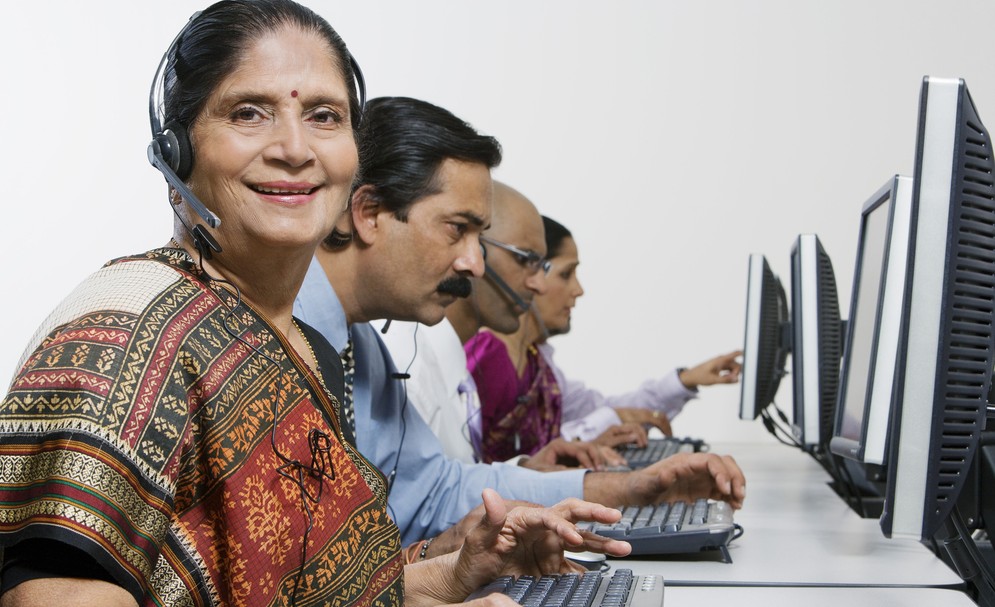 Working for a BPO as a woman isn’t easy, even if it gives many women purpose, confidence, and financial independence.

In the mid nineties business process outsourcing (BPO) centres, especially in the information technology (IT) sector, opened up all over India. By 2007, women made up almost 30% of the BPO workforce.

Women right out of class XII could start earning and some used this opportunity to save up for higher education. BPOs affiliated with IT companies hired engineering graduates whose numbers were rapidly increasing. This resulted in a significant number of well educated women with well paid jobs asserting their financial independence. Young women were travelling to new cities in unprecedented numbers to live on their own terms.

Apart from the financial remuneration, many of these women enjoy the work, like being a part of a team, and in some cases, are happy about the satisfaction that comes with helping people.

But working for BPOs is no cake walk for women. Patriarchal families, traditional values, safety and late night hours pose a number of problems. These women have had to fight battles on many fronts.

Many of these jobs have a night shift, dubbed by employees as the graveyard shift. Indian society, being fairly patriarchal, was not ready for women to be working and travelling at all hours of day or night. Karnataka actually had a law preventing women from working at night that had to be amended to accommodate BPOs.

Some people, threatened by the progress women were making, tried their best to shut them down, through violence or harassment.

The BPOs have taken measures to ensure transport security of women by providing cabs, requiring that a female employee cannot be the last one to be dropped off. They have also set up GPS tracking of vehicles and SMS hotlines etc. In spite of this problems persist. Women still sometimes end up alone with a cab driver when someone misses their pick up, or there may be a male security guard and cab driver which is not necessarily comfortable. Also the pick ups and drop-offs follow a rigid schedule and women requiring occasional flexibility face problems.

Aesha worked for a call centre for a while before she decided to pursue higher education. She says her parents were very supportive and proud that she was independent at such a young age. But not many parents feel this way about their daughters working for BPOs.

Jannet and her brother both worked for IT call centres. While Jannet’s parents were quite supportive of her brother’s job, they had many issues with her. Some relatives actually told her, that people might confuse call centre with call girl. Her parents were worried that having such a job would ruin her marriage prospects and tried various forms of emotional blackmail to get her to quit her job. She says, “Practically, more power to the women who manage marriage and a call centre /BPO job. I would not have been able to do it. ”

Some relatives actually told her, that people might confuse call centre with call girl.

Sunita worked for a call centre after her children had grown up. She wanted the job for an opportunity to work with a young crowd. She says her children were concerned about her shift timings and urged her to quit.

Many married women find it very difficult to maintain BPO jobs, usually due to pressure from their husband or in-laws. In our society married women working night shifts is rarely acceptable. Besides after marriage the responsibility of housework falls on the woman, making such demanding jobs impossible for them to manage. The work culture of socialising in bars and pubs are probably a deterrent as well.

Eve teasing and sexual harassment are problems faced by women in BPOs. The problem is exacerbated if the harasser is in a position of authority. Sometimes customers flirt with women making them uncomfortable.

Additionally there is discrimination in promoting practices. According to this article Most employers are skeptical about the ideas and communication skills of women hence, most females do not get a job that goes with their talents and experience. Equal pay and fair promoting practices are much required in BPOs.

Sleep deprivation in call centre jobs is huge health concern. Although Jannet loved the work, health issues forced her to quit. She says, “Shifts would be planned out for the next week. Any 2 days off (not necessarily weekends), and a mix of day, night, and midday shifts. My periods were a bigger mess than usual for 6 months after I left. My immunity was at an all time low. I was ill frequently.”

The health problems that plague BPO employees could be worse for women than men. For example sleep deprivation takes a much greater toll on women than on men. Similarly many health problems common to BPOs like back aches, stress, nausea etc can be worse for women during periods or if they are pregnant. According to this article, recent studies on shift work and reproductive health suggest that night work and irregular work hours may also be associated with elevated reproductive risks, such as spontaneous abortion, pre-term birth and lowered birth weight.

Social interactions are important for sound mental health. Yet because of odd working hours many BPO employees find it difficult to socialize or spend time with family. Some compensate by hanging out with colleagues, but since their jobs are stressful, many indulge in smoking and drinking, thereby excluding women from traditional families. Jannet says, “Cigarettes, drinks, casual flings, partying happened. I had a strict mom to return home to. But I was so tempted to go along at times.”

Although BPO’s have helped many women gain confidence and achieve financial independence there remain several problems with the industry that need work. However it is true that BPOs have continually made efforts to improve security for women. In a further effort to encourage women, Zia Sheikh, the COO of Infowavz International, a Mumbai based Call Centre says, “We try to reassure the relatives of our women employees by organizing Family Days on a regular basis.”