The Tale Of Backpacking Across India, By Samantha Jo Fitzsimons, An American Anthropologist

Samantha Jo Fitzsimons backpacked across India with an Indian colleague. Her experiences are documented in this very interesting film. 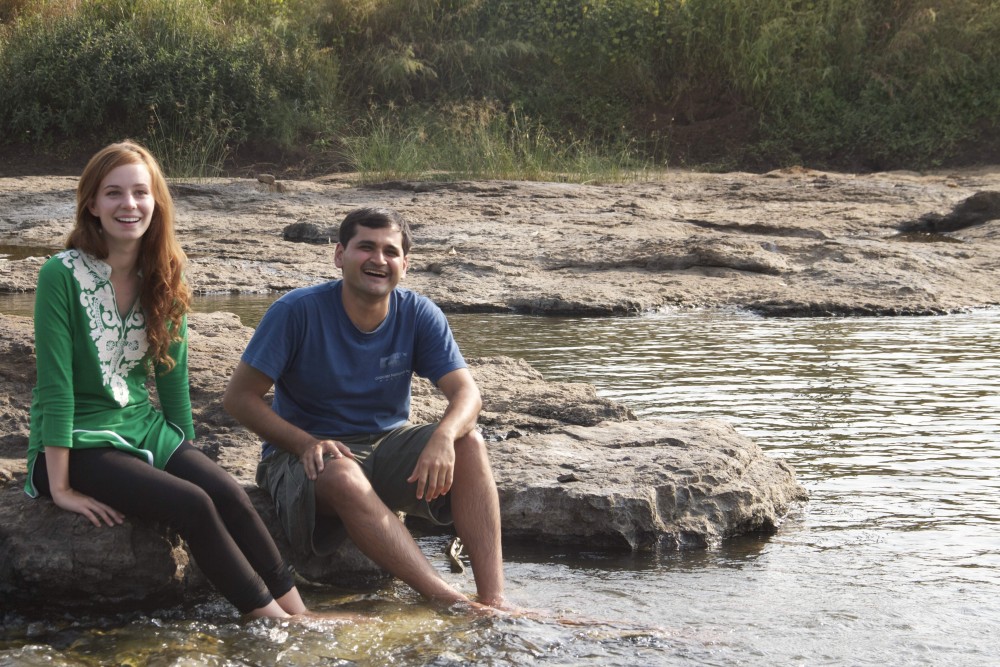 Samantha Jo Fitzsimons backpacked across India with an Indian colleague. Her experiences are documented in this very interesting film.

Riding On A Sunbeam is a travel documentary in which Mauktik Kulkarni, an Indian neuroscientist, and Samantha Jo Fitzsimons, an American anthropologist, backpack 8000 kilometres across small towns and villages, capturing the contradictions of India.

We have watched the Bollywood movie ‘Queen’ and the idea of an Indian woman travelling solo in Europe has inspired a lot of us to take that plunge into international travel. But can we imagine the situation reversed?

What would an American woman’s travelling escapade in the interiors of India be like?

Five years ago, Samantha Jo Fitzsimons, who holds a bachelors’ degree in Anthropology with an emphasis on cultural studies from the University of California, Berkeley, met Mauktik Kulkarni, an engineer with a masters in biophysics and neuroscience. Little did she know that five years later, this highly qualified duo would backpack across India to make a travel documentary!

The movie titled ‘Riding on a Sunbeam’ beautifully captures the challenges and opportunities of India through the eyes of an Indian, Mauktik who has travelled around the world and Samantha, an American currently pursuing further studies in medicine, visiting India for the first time.

After watching the documentary, I was intrigued and wanted insights into Samantha’s experiences and encounters in India. In a candid interview, she recounted her journey from the outset.

The first impression – An onslaught of the senses!

“As an outsider, a trip to India begins as an onslaught of the senses – Hot and humid weather, swarms of people, car horns, and delicious spicy foods overwhelm the experience.”

While travelling in villages, Samantha wore a salwar kameez despite the unbearable heat. She felt compelled to cover up for modesty’s sake. She still loves her salwar kameez and dupatta and wears them all the time. “But once the novelty wears off you can really start to appreciate the nuances of India,” she recalled fondly. Samantha was astounded by the diversity, and yet she found uniting threads of unmatched hospitality, tremendous creativity and beautiful countryside.

One of the cultural disparities Samantha struggled with was the concept of arranged marriages. At first, she wrote it off as archaic. She spoke to many women about the practice but could not relate to the willingness to marry someone you barely know!

I especially liked the part of the movie where she says that in the United States, once a person is married, family refers to the spouse and child. Not your parental family. She would want her parents to like the person she marries but would not necessarily seek their approval.

It wasn’t until she spoke to a father that she gained a different perspective. By aligning his daughter with someone of the same caste, and therefore similar ideals and economic status, he was ensuring what he truly believed to be her happiness. While she could never abide by that practice, she came to the realization that marriage is a challenge, whether you are already in love with the person, or are learning to love them along the way.

I asked her what is one thing that she would like to tell Indian women. She said that it blew her mind when she found out that Indians buy fairness cream to lighten their skin!

“Do you guys know that in the states we spray ourselves with tanner and lay in tanning beds to have that beautiful bronzed glow that you all have?”

Secondly, she wants Indian women to remember that they run the country. She felt that Indian men have taken women for granted. She specifically narrated an incident where one of the crew members expressed resentment over his marital problems. But Samantha felt frustrated for his wife, who stayed home and took care of his home and kids while he was pursuing his dream of making a movie.

While Samantha understands that the Indian woman loves to take care of her family, the fact that she is expected to perform her duties is unfair.

I asked her about her views on patriarchy in her home country, and she said that women everywhere face inherent challenges no matter how feminist and ‘forward thinking’ a nation may perceive itself to be. “It is evident through women’s reproductive health rights, education restriction and job inequality. We’re all feeling it, just to different degrees.”.

She found the matrilineal customs in the North East fascinating in comparison to the rest of the country.

Excerpts from her travel journal:

“The matrilineal system is a sound and encouraging change to the rest of India I’ve witnessed. In this system the husband pays a dowry and, upon marriage, lives with his wife and her parents (if she is the youngest). All, or most, of the property goes to the youngest daughter. This allows protection and reverence for the woman, yet maintains a dignity and respect for the man—as his decisions are respected and followed with discretion from the wife and her family. I never thought I’d see a gender equality side of India till now!”

Life is short – take the plunge!

At the time of her trip there had been recent stories of rape and attack on female tourists. Samantha’s family was nervous, but trusted her judgement and took comfort in the fact that she would be travelling with several men who knew the country well.

A lot of women would have concerns about travelling and would let their fears hold themselves back.

Samantha believes that life is too short for such reservations.

“But be smart. Go in a group or take an organized tour if you’re really worried”. She adds.

Mark Twain has been credited with one of the most memorable travel quotes of all times: “Twenty years from now you will be more disappointed by the things you didn’t do than by the ones you did do. So throw off the bowlines, sail away from the safe harbor. Catch the trade winds in your sails. Explore. Dream. Discover”.

After talking to Samantha and Mauktik, I feel that I am really missing out on something! After all, life begins at the end of our comfort zone!

Here’s the trailer of Riding On A Sunbeam