Why Does A Woman Eating Out Alone, Enjoying Her Own Company, Make People Uncomfortable?

Why should a woman eating out alone be looked at with suspicion? As an aberration? As some thing to be wary about? As a Scarlet Woman? 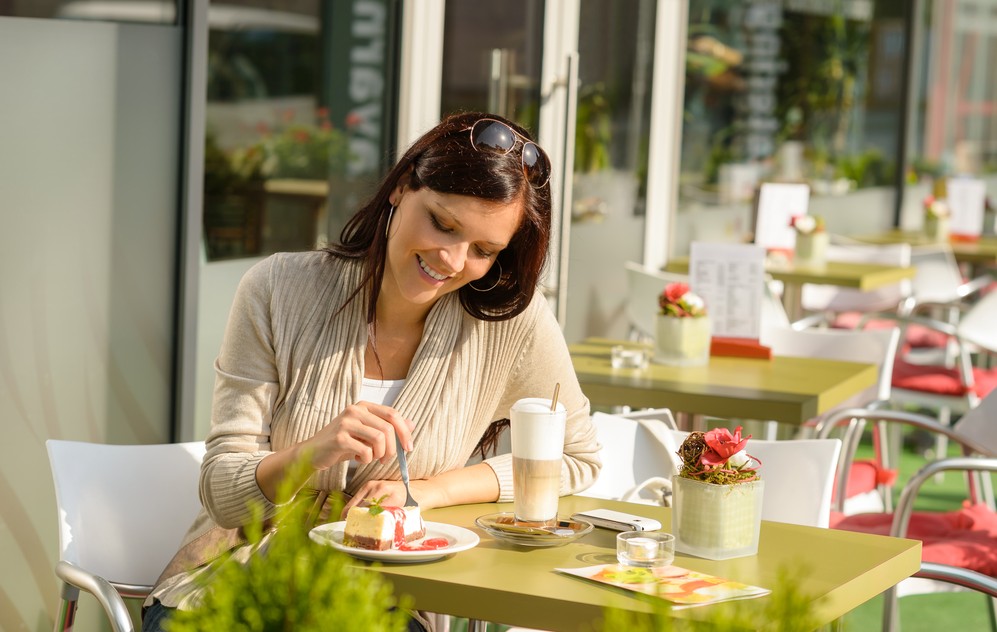 Why should a woman eating out alone be looked at with suspicion? As an aberration? As some thing to be wary about? As a Scarlet Woman?

It may be 2016. However an institution that has been sacred since centuries continues even today. For a woman more so in India, to be unmarried and almost 30 is as good as bearing the Scarlet A on her forehead. It’s not enough that she is well read, educated and has built a career or multiple careers for herself. If she isn’t married she isn’t ‘accomplished’.

I have been travelling for years packing in a minimum 12 holidays per year, yes you guessed the math behind this – 1 holiday for each month. Though when times are good I have managed 20-30 holidays in a year.

And now here I am, sitting on the upper deck of the Taj Hotel in Srinagar (Jammu & Kashmir) with the most gorgeous view I could have imagined. The Dal Lake, the sprawling mountains, a sudden burst of rain that seemed to just wash everything clean and now the grass looks greener and the flowers more vivid than before.

I came here to enjoy the view and a lunch with the best company possible – me of course! And something that I have experienced not only in my travels but also back home in Delhi is the look that restaurant seating hosts give the moment they ask – “Table for?” And pat comes my reply – “Just me.”

Somehow the look I receive is a mixture of awe, pity, horror, surprise and a quick attempt to cover up all of these. The initial surprise followed by horror is about why I would want to eat by myself when in a country like ours mealtime is a family thing. You just don’t eat alone. Perhaps with friends. But not alone. Soon this gives way to pity that perhaps I am so lonely and miserable that I have no one to eat with. As if my family abandoned me or (presumed) husband divorced me the moment I said I want to eat by myself today!

Once they realise that the individual is not meek and timid but rather happy and confident about eating alone and it is a matter of choosing and not chance, their look borders on admiration. And then of course it’s the hospitality sector – one cannot let these expressions linger so they quickly disappear. You would think in all the time these expressions surfaced and evaporated I could had my meal and left. But no. We are experts at conveying our opinion(s) through a look in a fraction of a second.

Am not writing this based on my experience at the above mentioned place in particular, rather based on various incidents over time. Goes without saying that an establishment of such stature would hardly be jaded whether you eat by yourself or with an elephant. But it does happen most of the time. So am beginning to think – perhaps ‘unmarried’ is not the Scarlet A, it is ‘unmarried and putting it out there for the world to see’ – for example eating out alone, which is apparently more horrifying.

I have seen men seated by themselves for a meal or a drink but they aren’t ever given the eye of shame. Whereas there is curiosity that follows the woman who sits alone. I put this down to social conditioning. Sometimes I do wish I was a man. To be able to walk down a street without being gawked at even while fully clothed or to simply head out for a drive at midnight or to fulfil 3 am cravings at the nearby paranthe wala.

Conditioning in our society has seen young girls eat out with their families, later in high school or college years with friends and soon married hence meals out with the husband, the in laws and soon a baby in tow. When did this woman get to experience the joy of a meal by herself?

I am emphasizing on eating alone outside, and not within the haven of her home. Yes am talking urban India before I have someone point out to me. But to be clear the pressure of marriage, and stigma if not so, is not limited to the rural sector only.

The stories and tragedies that emanate from the middle, upper middle and high class are coming out of the closet. Those which focus on a woman’s situation more than the woman, a lack of comfort in her own skin, and the identity confusion.

Why is it that a woman moves from her parent’s home to the husband’s without so much as a thought to her finding her own self? We believe that the transition from a daughter to a wife and soon mother is enough. Who talks of the ‘I’? How self-indulgent!

I was very self-conscious in my early 20’s. I see young adults today – they appear confident and are willing to be the way they are regardless of what society or people around deem right and wrong for them. This is worthy of admiration. I wish I had half that when I was their age. But would I truly want that? No.

Perhaps with academic and physical education we must focus on psycho-social education too, beginning with ourselves. Prepare each one to enjoy their own self first and foremost. To learn to be alone as against what people take to mean as lonely.

Because it is my initial awkwardness and discomfort on being out on my own that got me where I am today. I could not even dream of eating out alone. If I reached before a friend I would inevitably fiddle with my phone or call other friends whom I hadn’t spoken to in order to kill time. And god forbid I was waiting for someone to pick me up. The poor soul would receive more calls about his/her precise location every few seconds, way more correspondence than the Prime Minister himself would indulge in.

Years passed, work carried on, friends got married and moved on (geographically and otherwise) and the realisation set in that I would always have me. So what better time to make friends with myself such that irrespective of the place or situation I would always have my own company? It took time but I am finally there. Maybe not completely but I am there in that area.

There isn’t a joy greater than ordering what you want without waiting for another to read the menu like a book. To order something that may be high on cholesterol and frowns, but more so on happiness and contentment.

Perhaps with academic and physical education we must focus on psycho-social education too, beginning with ourselves. Prepare each one to enjoy their own self first and foremost. To learn to be alone as against what people take to mean as lonely.

Perhaps once we all have a better understanding of ourselves would we be more empathetic, considerate and loving towards others as well.

Image source: smiling woman at a cafe by Shutterstock.