A woman traveling alone is rare in India. Here’s a journey taken by the writer to the Northeast, on which she learnt a lot, not just about the place, but about what she could do alone.

In November I decided to travel to Northeast India. When I shared my plans of going alone, I got one of two responses: ‘that’s crazy’ and ‘that’s so cool’! I think it’s a bit of both – crazy because I had to politely refuse a strange co-passenger who asked if he could take my picture and cool because I got to hop onto a helicopter. I love to travel and was tired of waiting around for friends to be free. I don’t get bored of my own company either. These were the reasons for venturing out by myself.

Itinerary at a glance

Day 1:  Landed in Guwahati and traveled to Shillong

Day 2: Sightseeing around Mawlynnong and Cherrapunjee

Day 3: Back to Guwahati

Day 4: Traveled to Kaziranga followed by a jeep safari

Day 5: Elephant safari and back to Guwahati

Shillong – A city in the clouds

My stay in Shillong was in a busy chowk called Police Bazaar. In the evening the bazaar comes alive with noisy traffic, vendors, shoppers and tourists. You can find small shops selling momos, tea and betel leaves every few meters.

Shillong is a pretty little city perched on green hilltops overlooking numerous lakes. In November, the hillsides are mottled with pale pink cherry blossoms and a thick cloud cover descends on top. One very noticeable thing here is the demeanor of the woman folk, which is very different from other cities in India. There is a sense of confidence and outspokenness about them. Perhaps the roots of this attitude are in the matrilineal system that the Khasi and Garo people of Meghalaya follow. Here the groom marries into the girl’s family, a child takes the mother’s surname and most of the family property is passed on to the youngest daughter.

Shillong has a truly distinctive culture – a pretty landscape, a young crowd and an unhurried way of life. My first day of travel ended with a short tour around this homely city and a plate of steaming hot momos and chicken soup.

The next day I set off for Malwynnong, a village 2 hours away from Shillong. After the short hills around Shillong, the landscape got serious with steep mountains and deep valleys. Along the way there were small clean villages where I saw mostly women working. The houses were neat little structures and the people seemed to be affluent, which is unusual for rural India. I was told that the Khasis are a rich community due to the coal and limestone mines that they own.

Mawlynnong is popular for a live root bridge that looks like a magical little place straight out of a fairy tale. Made and maintained by locals using aerial roots of the surrounding banyan trees, the bridge can be used to cross a brook flowing below it. The icing on the cake was the beautiful butterflies that kept flitting around the place. From tiny ones to those as big as your hand, you can find them in colors ranging from yellow, orange to a brilliant blue. I also came across a pitcher plant here. This insect eating plant was something that I had only studied in textbooks back in school and it was nice to get a glimpse of a living one. 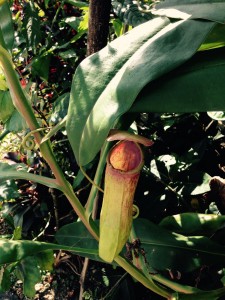 I then started off for Cherrapunjee. The rainiest place on earth turned out to be the sunniest place I visited so far! Cherrapunjee is a quaint old town. A couple of ancient churches and bungalows are testimony of its status as government headquarters during the British era. Prior to British rule, the local tribes practiced cannibalism and followed customs such as human sacrifice during Durga Pooja. Today these customs are modified by sacrificing a lamb dressed and masked as a man.

I first visited the Mawsmai cave, which will require you to do a bit of acrobatics to get through to the other end. Next in line was the spectacular Nohkalikai waterfall with water cascading down 450 meters. To sum up, Shillong and Malwynnong were very beautiful during this time of the year. For Cherrapunjee I will have to come back during the rainy season to experience the real beauty of the place.

Cross your fingers and pray hard if you plan to do the helicopter ride from Shillong to Guwahati. After a series of incidents like incorrect booking, technical difficulties and a 3 hour long wait at the Shillong airport I finally managed to board the helicopter. This service is run by the Meghalaya Government and is very affordable (Rs 1500). The ride is a 20 minute journey and the glass cabin offers a 360 degree spectacular view of the cloud cover, North Eastern hills and numerous water bodies. It was definitely one of the high points (pun unintended!) of my travel. 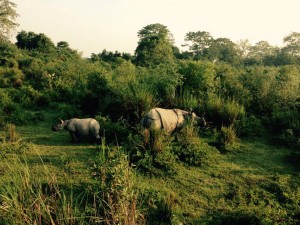 On Day 4, I took a bus from Guwahati to Diring in Kaziranga. The rural Assam landscape looked like an endless copy-paste sequence of a few images – rice fields, ponds filled with lotus, fishing nets, goats, geese and betel nut trees. After 5 hours I reached Kaziranga National Park, widely known for its one-horned rhino. The sanctuary is peppered with lakes and vast expanses of tall green elephant grass. The grasslands have a backdrop of heavily wooded mountains in the west and tea gardens in the south.

In the afternoon I went on a jeep safari through the central zone of the sanctuary. During the 2 hour ride we were able to spot wild elephants, rhinos, buffaloes, deer, wild pigs; basically everything except the elusive royal Bengal tiger. Nevertheless the hordes of rhinos almost compensated for it. And here’s a fun fact that the driver shared – rhinos wander about to graze but after a month they always come back to the same spot to poop!

On the way back, he pulled over the jeep to the side and the two of us sat there in silence watching the sun set. We waited there till it went down behind the western mountains, turning the sky a pinkish orange. The deer and rhinos grazed in the tall grass while flocks of large cranes flew overhead. It was a peaceful experience and turned out to be one of the best moments of the trip; one that I will fondly recollect during my busy evenings in Mumbai.

That night I was served a traditional Assamese meal. The fish preparation consisted of tiny whole fish cooked in a poppy seed base. The fish are supposed to be eaten with bones and all. “Chew well!” was the advice I got from the server.

After an extremely chilly night in my hut, the following morning I mounted an elephant for a safari. Each elephant carried 6 tourists and a mahout straight into the grasslands for an hour-long ride. I would definitely recommend this safari since you get to see the rhinos from very close quarters and get a very real experience of the marshy grasslands.

My solo journey has been a wonderful experience. It has been a mix of learning to change plans on the go, trusting your instincts and letting go of your inhibitions. From a cab driver who was an international boxing champion to a local who invited me for dinner with his family, my journey taught me a lesson or two in kindness shown by strangers.

When you are alone in a new place, you are more aware of its vibe and culture. When I first landed at the Guwahati airport, I was a bit nervous but as I traveled, I began to feel more confident. Luckily there was never a moment when I felt threatened or uncomfortable. On the contrary, I had many experiences that I would have missed out on had I had company. The early morning dirt bike ride zooming down the road at Kaziranga or the opportunity to play with a baby elephant might not have easily happened had I been part of a larger group. Everyone I came across was curious about my lone travel. But after some interaction, their curiosity would often change into concern and they would go out of their way to help me; like the hotel manager who waited for half an hour on the road with me for my bus or someone who offered me a better bus seat since I had a long way to go.

I consider myself a bit of an introvert but traveling alone, I was surprised to discover that I am in fact good at striking up conversations. A polite, confident smile and a thank you goes a long way in putting people at ease. If you are genuinely interested in people and their culture they are always willing to share their stories. On quite a few occasions, I ended up having a cup of tea and sweets with a driver or a guide and they would tell me about their life. Of course, traveling alone also means that you have to be extra watchful of your luggage and aware of your surroundings. But on a whole, my trip has made me more confident and has been a journey of discovery: of culture, nature and also a bit of myself. 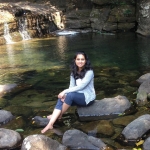 After pursuing an MBA last year, Parul Nalavade now lives and works as a consultant