Baby, You Are Not HOT Enough!

Bartoli is a fantastic sportswoman and achiever. Why does her beauty matter? 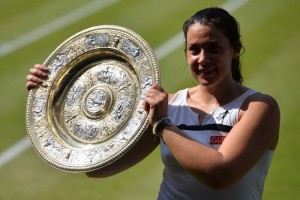 There is something wrong with the world; something extremely wrong. It is insanely wrong. I do not follow tennis. But when Marion Bartoli grabbed the Wimbledon’s women’s single title, the social media did not seem to be happy. No, it was not the strokes she played or the win she had, it was the way she looked. Here are a few remarks from Twitter:

I wanted Lisiki to win because Bartoli is ugly and she looks like she’s covered her face and hair in Bartoli, oil faced b&^%h

Bartoli is too ugly to win Wimbeldon

And there is more to come. BBC presenter John Inverdale instead of congratulating her on her absolutely awesome win over Lisicki made an sexist remark by saying, “Do you think Bartoli’s dad told her when she was little: ‘You’re never going to be a looker, you’ll never be a Sharapova, so you have to be scrappy and fight’?”

Inverdale was later forced to apologize. But tweets online poured on and on criticizing her looks, her breasts, her face and her body. There were tweets calling her a man winning the women’s title. It is disturbing to notice that just because she does not fit into the conventional mode of what they think is “Hot,” this athlete is hounded by sexist remarks.

Just because she is a woman, her looks matter far beyond her stunning win. In a civil society her win should have been discussed more and with more applause. She has not won any major title before this. But everyone was outraged because winning the Wimbledon needed a certain type of body curves and a certain kind of face which of course Bartoli did not posses. And here we are not even talking about someone who is in the show business. For God’s sake she is an athlete, sweating in the heat is her daily ordeal. She won her dream, but does that matter, she who is but a woman? She needs a better body and looks as per the critics.

Most interestingly, although she is a Wimbledon champion, she too is not spared. But she came out with the best reply, “I am not blonde, yes. Have I dreamt about having a model contract? No. But have I dreamed about winning Wimbledon? Absolutely.”

Kudos girl! Dreams are anyday more important than the curves of the body. Go girl go!

Wimbledon is still a far cry. Let’s talk about home. When Aishwarya Rai gave birth to her baby, the whole nation went insane about the fat in her body. Whom are we kidding? How many women on earth start looking like a ramp model after child-birth? Don’t most of them gain weight? Doesn’t our body too go through the normal wear and tear process? Every one cannot be like Victoria Beckham who gives birth to a child and looks perfect the next day. But are we sure that her perfectness is natural?

Why can as a society not accept changed and different bodies? We all know perfectly that no one is alike, but let someone like Aishwarya Rai get fat, everyone gets into a frenzy. The photographs are pasted all over the newspapers and magazines. Who can forget her visit to Cannes that year? We all remember the way the media tore her apart specially for her weight. But wait a minute, do we remember anything about why she was there and what she did? What hurts us about a woman who weight more or someone who does not fit into our conventional sense of beauty? Does it hurt us that Bartoli has worked her way to win the Wimbledon? Does it hurt society so that to pull down a successful and rich woman like Aishwarya, her gaining weight is the best way to target her fall? And who are the judges and authority on beauty?

No doubt we are so conditioned about beauty which has to somewhat look like Barbie doll, that society refuses anything else. The obsession with becoming thin is something I have personally seen with friends. And our national obsession of being fair. Why can’t we accept that most of us as Indians have brown skin? Fair and Lovely still sells on this national obsession.

As I watch Bartoli’s winning moments now on the re-runs I wonder what has this 28 year old done to be greeted by anything but applause. But she is a woman; her gender came before her stunning win. I hope many more Bartolis win Wimbledon until one day every Bartoli is talked about loud and clear for winning her dream and not for the curves of her body.