As gender stereotyping affects every girl child in India, teaching kids to look beyond pinks and princesses becomes even more pertinent. 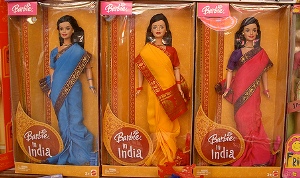 As gender stereotyping affects every girl child in India, teaching kids to look beyond pinks and princesses becomes even more pertinent.

An article at Huffingtonpost has recently been doing the rounds on social media networks. The author rues the fact that the only clothing available for his daughter was in shades of pink, with the inevitable Disney Princesses or Barbie printed on them. Why, he argued, did manufacturers not make gender neutral clothing for girls? To increase sales!

Many Indian mom who go shopping for children’s clothes have also faced this problem of pink and blue. As Anitha Ramkumar, a fellow blogger puts it, “If you are looking for non-pink, non-Disney characters, slightly loose, appropriate clothing, something that will withstand the running and climbing, and something that is not a mini version of adult clothing you might as well grow your own cotton and weave your own clothes.”

I followed the comments on the article with interest – these were today’s women, in every sense, and I was keen on finding out what they had to say. “The aisles in toy stores here scare me”, commented Nitya Kartik. “(There are) aisles of blue hued toys for boys, (and) aisles of violently pink ones for girls.” To which Subhashree Beeman replied, “I think these stores should have a gender-neutral aisle where mommies like us can shop without heartache.”

Heartache is right. Ever since my daughter was born, I too have faced the pressure of dressing her in “suitably girly clothes”. She often has trouble with peers, all big-time into the latest fashion, divided by gender. As Namrata Vora, who works for Aarti Home, an NGO for the girl child, also a mother of two girls, says, “If all little girls see is pink and shiny they will think that is normal.”

Children are exposed to the 24/7 media onslaught as never before. Television channels exclusively for children carry messages propagating commercialisation, stereotyping and what can only be called ”Barbification”. Barbie might have been originally a teen icon for feminists at a time (the late 50s) when most women were not expected to step out of the home for a career, but over time she has evolved into a feminist’s nightmare. The demographics have changed from teens to pre-teens; sometimes even younger. With her impossibly top-heavy figure (if extrapolated to adult female size, the measurements of 36-18-38 are near impossible in real life), long slim legs and vacuous sexuality, Barbie sends a skewed body image message to girls who buy into the unhealthy eating patterns that this propagates. A friend’s 7 year old refuses to eat fruits because her peers say they will make her fat.

Most of these problems are shared by the Disney Princesses. A brain-child of Disney’s marketing executive Andy Mooney at the beginning of this century, it was a masterstroke that spawned a multimillion-dollar industry in dolls, clothes, accessories and other merchandise; a model that manufacturers for children have repeated over and over again with many other popular fictional characters.

Boys, too, suffer due to these brand and franchise excesses. The same inimitable Anitha Ramkumar says, “At least girls have a level of freedom in their choice of dresses, games and playmates. Imagine how much the parents will be freaking out, the father more than the mother according to researches, if the boy dresses in pink, plays with dolls and only with girls, and likes wearing his mommy’s jewellery?!”

Children’s play always reinforces cultural messages, as they learn patterns of behaviour through it. Peggy Orenstein, social psychologist and author of Cinderella Ate My Daughter, puts it wonderfully well: “At issue, then, is not nature or nurture but how nurture becomes nature: the environment in which children play and grow can encourage a range of aptitudes or foreclose them. So blithely indulging — let alone exploiting — stereotypically gendered play patterns may have a more negative long-term impact on kids’ potential than parents imagine.”

…boys are being sent the message that they are the powerful do-ers who may do as they will with the other half of the population. This de-humanizes them too.

Girls playing with Barbie or Disney Princesses and using related merchandise are being sent this message: ‘You are valuable only as a beautiful body, as someone who needs to be cosseted, protected and needs to spend life indoors. You cannot be smart or ambitious. It does not matter what YOU want to do or feel.’ It is a powerfully dismal message, and sets up girls for a life in which they feel OK being objectified.

At the same time, boys are being sent the message that they are the powerful do-ers who may do as they will with the other half of the population. This de-humanizes them too: it prevents them from being in touch with their human emotions of nurture and care, and perpetuates a culture of violence.

In the Indian context, this becomes even more of a problem, as we already have our own set of patriarchal stereotypes. “I’d totally discourage my daughter from being pushed into a choice because it’s traditional and expected of her,” says Smriti Lamech, a Gurgaon based journalist and fellow blogger, and mother of two: “I’d also totally get mad if someone said my son couldn’t stay home and raise kids while his wife worked.” Shalini Froiland, her friend from Norway, agrees. “I buy from the girls section for my boys if I need to find something colourful.” As I buy from the boys’ section for my daughter if I want to avoid the relentless pinks.

The solution, Smriti says, is for parents to raise a voice and walk the talk. “This is a new industry. Until some 20 years ago people were making boys and girls wear the same jhablas. There was no industry. So if we start asking for more gender neutral clothes, they might give it to us.”

“Barbification” of India further complicates the already skewed social structure that stereotypes its women and men. As Nitya Kartik says, “Battles to be fought at every corner, regardless of your gender.” Indian moms, let’s start teaching our kids that the girl child is to be valued.