The Voices Of Men

Do gender stereotypes silence the true voices of men too? On bringing up the boy child in India 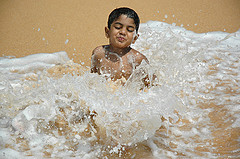 Arundhati Venkatesh describes herself as a kid-lit enthusiast, an observer of life and people, a feminist, a minimalist and a compulsive maker of lists! An engineer by degree, and an IT professional in her previous life, she is now an aspiring writer. Arundhati works for an NGO.

The voices of women suffering abuse and oppression can be heard now. Finally.

What about the voices of men?

The voices of men call out to me. I have a father, a brother, a husband, a son, cousins, friends…

I hear them say, ‘We suffer too. Maybe not as much as you. But we do too.’

Don’t be a sissy.

You have to be the breadwinner.

When you see a little boy sniffling, don’t tell him that boys don’t cry.

When he says he wants to take up history, or research, or teach, don’t tell him he can’t.

Don’t tell him he has to be the breadwinner.

Don’t tell him what he should do, and what not to do.

When he gets emotional, don’t tell him he’s being a sissy.

Give him a shoulder to cry on, a hug, a listening ear, comforting words…

Don’t expect him to be a superhero. Let him be human.