Dr. Aparna Mahanta, was known to many as the first woman in Assam to earn her doctoral graduate in English Literature. She was a feminist writer, researcher, and professor.

[Eminent progressive feminist writer, researcher, and professor Dr. Aparna Mahanta is no more with us. Many knew her as the first woman in Assam to earn her doctoral graduate in English Literature. She was born on August 20, 1946, in Sivasagar, Assam, she passed away on 26 January 2022.]

Dr. Mahanta, was a retired professor in the department of English at Dibrugarh University, Assam. She was the founder and director of the University’s Centre for Women’s Studies and Research, one of the leading pioneers of the progressive women’s movement in Assam. 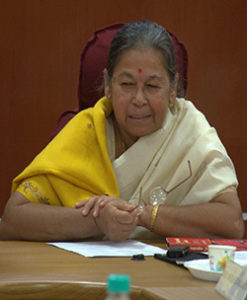 Her demise is an irreparable loss to the feminist movement, literature, and academia of Assam. She was a relentless fighter, dreaming of the liberation of oppressed women.

Dr. Mahanta built a very close relationship with the labour section of women and took the lead in organizing, making them aware of their rights.

She had been associated with many social and feminist organizations. Many movements at different levels; from grassroots work to national mobilization.

A champion of united movement

At this moment, many intimate moments spent with her have come to my mind. Proximity with Aparna baideo [elder sister] had been built since 1985 at the time of the formation of the Jorhat District Women’s Association.

Later, at the Jorhat District Women’s Association’s conference held in the year 1985. The State Invitee Committee of All Assam Women’s Association was formed with Aparna Mahanta as the chief invitee, of which, I was also included as a member.

An inspiration to younger generation

Dr. Mahanta associated with many women, young girls, and girl-child students. These young women participated in the progressive women’s movements, which were formed with the aim and philosophy of social transformation.

Apart from Assam and the North-East, she also took initiative in building progressive women’s movements at the national level too.

Especially, she was one of the prominent leaders and organizers of the discourse of women’s movements developed in the 80s and 90s in Assam as well as in India.

She was there when history was happening

She took part in various women’s meetings, workshops, and conferences with them with the sole aim of women empowerment and liberation.

She was extremely serious about women’s dignity and rights and never compromised on these issues under any circumstances.

Apart from these, several of her research papers have been published. Most of her books are women-centric and gender-related. That she was a committed feminist; her works bear the testimony.

She practised what she taught and fought for

But she was not only confined to academic writing. She tried to apply the theories to practice. That is why; she was a busy activist too.

Whenever we talked over the phone, we used to talk about women’s issues. The last call was about a month ago before her demise.

Physically, baideo was a little sick for a few years, but we could not think of her leaving us all of a sudden. She was busy doing a series of research and study on the development of patriarchy just before her death.

A legacy to admire

Finally, I convey my deepest tribute to this silent, vicious woman. We wish that the life and work of this woman, who, despite her talent and contribution to the Indian feminist movement; always maintained a low profile.

As her friend and admirer, I hope her life will encourage the feminist activists and that the upcoming feminist academicians will find new inputs for their research.

The original article is written by Junu Bora, was first published in Axomiya Pratidin. The article has been translated from Assamese by Sujata Hati Baruah with permission from the author.

About Junu Bora: She is a veteran women rights activist in Assam. Besides her government job, she is also an editor, translator and writer. Her works include Linga Baisamya, Shringkhal Singar Ahban, Bhinna Prasanga, and translation of  Narir Mulya into Assamese.

I write or translate on gender, food and cinema. read more...