President Droupadi Murmu — Much More Than Her Tribal Woman Identity

President Droupadi Murmu— is more than her tribal woman identity; educator, councillor, MLA, and Governor, now she is the President of India!

The largest democracy of the world has sworn-in its 15th President on 25th July 2022. What comes to your mind when we discuss the new First Citizen of India?

First Tribal President, did you say?

I feel, President Droupadi Murmu, is much more than that. For me, her nomination and election has been an overwhelming and emotional journey.

The fact is, She has made history! 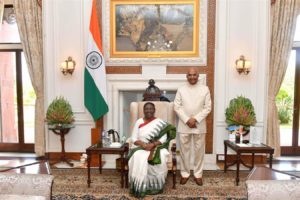 President Droupadi Murmu has many firsts to her credit.

She is the first President to be born in independent India. She is also the youngest President of India!

We have welcomed a great and truly deserving self-made individual, a citizen who, in her own words —  ‘belongs to the poorest of the poor family and from a small village.’

This is the same nation that has a former Chaiwala as the Prime Minister. Now, we have a former Teacher, Councillor, MLA, and Governor as the President!

It is a proud moment that an educator; well-qualified, dedicated, resilient, hard-working, disciplined, empathetic, empowered, simple, and inspiring personality has been elected to the top office of this country.

Does the gender or tribe or humble beginning even matter? Can such credentials ever create impediments and stop one’s ascent? Yet, many cite these issues to explain their lack of success.

Where we come from should not be our excuse or something that needs to be avoided or hidden; rather, it must be our strength, and we must be comfortable and proud to accept and acknowledge our origins.

Many are shy or ashamed of their roots or family background. Once successful, some never want to face them again. How will the infrastructure be strong when the foundation is built on shaky ground? 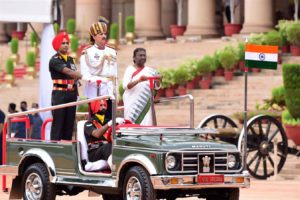 President Murmu teaches us to just keep going on

When faced with obstacles and adversity, some break; while others like President Murmu break and create new records. They just keep going. What matters is the indomitable spirit, will power, courage, confidence, and stamina.

Her present position and journey speaks volumes. Despite personal loss and having lost both her sons and husband, she never gave up and continued the good work.

President Murmu used to rank first in her school finals. She had also been a proactive child as she class-monitor in her schooldays.

She was the first girl from her village Uparbeda, a remote place in Rairangpur Tehsil,  in Mayurbhanj district of Odisha, from there she went to study to the state-capital Bhubaneswar for her schooling.

And, then, she continued her studies at the Rama Devi Women’s College. She was the first woman graduate of her village.

Her village is on the world map!

How many of us had ever heard of Uparbeda or Rairangpur before? Students said that thanks to the President, now their village, town, district, and state is in the news!

More and more people have now heard and learned about Uparbeda, Rairangpur and Mayurbhanj of Odisha now. The villagers celebrated utsaba (festival); and they are so happy that they are celebrating all the festivals at same time!

Social Service with a Smile

Like a true karamveer, she continued working for social causes, and has sorted many problems and issues for people around her. The President shared these Odia words by quoting Odisha’s famous poet and saint Bhima Bhoi:

Translation in English: “Working for the welfare of the world is greater than personal interest.”

Initially, when the President was nominated, some made fun of her first name and also her tribal background. Now, many are hailing her selection and election as tribal empowerment and women empowerment.

There is no doubt about the significance of her position empowerment for both tribals and women. As both groups are considered weak. And a tribal woman is even weaker condition in our country

Apart from being the symbol and triumph of empowerment, President Murmu also represents hope, courage, sustainability, simplicity, humility, and the power of education. She empowered others too after being empowered herself. 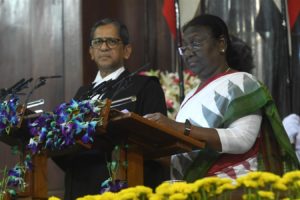 Caring for mother nature is our duty

In her speech, she also shared that we all must take care of the environment. She expressed that service to nature is everyone’s responsibility.

During the swearing-in ceremony, Bharat Mata ki Jai and Vande Mataram could be heard from the audience. In a past speech of President Murmu, she stated that Odisha is her motherland, where she was born and learned to walk and studied.

In Sanskrit — Janani Janmabhoomischa swargat api gariyasi,  which means: mother and motherland are greater than heaven.

The President is also a mother and a grandmother

She is an inspiration, we all can learn from her that with the help of education and hard work, any woman can overcome their obstacles and rise to the top.

We are very proud to welcome such a down-to-earth, strong and great President, a mother of our motherland, who also happens to be a Tribal Woman.

Image Source: From Website of The President Of India via Canva Pro