I have now decided that you will never choose who touches me anymore, everything will now require MY consent. Maybe then my sleepless nights will end.

Trigger Warning: This deals with child sexual abuse and parental neglect, and may be triggering to survivors.

A chain of events were in the making,
when you didn’t listen to my plight,
when you ignored the warning signs,
and considered them to be just slight.

When I was 14 and our family friend’s son tried to molest me; i was blamed,
I hid it for a long time, then CBSC results came and he earned fame,
You congratulated and patted him and made plans to make him your “in law”.
It was then that I revealed his deed, and guess what, only I was shamed,
For when I was 8, I jumped around and played with him, and he took it as a green signal,
it was an 8 year old’s fault and not the guy who molested her much later.
Is playing and jumping a signal? Or should it now be considered illegal?

Nevertheless this continued, because you spread the word that it was me to be blamed,
no good schools for me post 10th, because my “kundli” said I would have a love marriage.
Was it really fair, I still question myself? With no answers and years of bondage.
In the end, HE went out to study and I didn’t, and was but shamed.

This incident continued with two other “uncles”, no pun intended,
one being my paediatrician and the other our family doctor.
Things got out of hand with my back being groped and me being touched and hugged every time.
My father used to say “if you hug someone, I will kill the guy”, but apparently it was a problem only when I consented.

I used to cry a lot mostly not knowing what was going on,
When I found out, I questioned everything and I was silenced,
with people questioning my looks, and telling me that my sister is prettier and yet nothing happens to her.
Also, you said, ”much worse happens to girls, it’s just a touch move on”.

I had a little baby face and was called young,
I was told that I am simply attractive and not pretty.
You then made me feel bad and gave reasons too wrong,
What mother tells her daughter, that she looks barely 10 years lesser than herself; that’s so petty.
Or I was made conscious of my looks, my weight and my height.
The rotis I ate were counted, and I was told that I would be married by 18,
because there is a certain age for girls, with them having no choice or voice.
To shake my confidence and reduce me to a vassal was something you tried with all your might.

I was judged, and so was my character, but the truth was that I was just a weak link;
a little girl with non supportive parents is a viable target,
because nothing she tells will ever be heard.
And thus, Harassment was then the only thing.
One day when I had enough, I started hitting those “uncles”;
they didn’t even flinch or say a word,
apparently I was not the only one they smothered.
I hit and hit and then I realised that I was only hurting my knuckles.
With no one to hear and no one to act, I used to shout in frustration,
I tried everything, even boycotting events, but you said I had no option but to go.
One day when I had enough, I shouted when he groped my back,
he got tense and in the moment, he showed you how actually he touched me.
You flinched and flinched and the matter went up to my father;

apparently, you cannot touch my wife, only my daughter.
And I was spared from all such events,
but soon things were forgotten, and I was blamed again;
”we cannot lose a friend because of you” I was told by you.
Obviously, mother, a harasser friend is much more valuable than a daughter (much to anyone’s  disdain).

You never supported me and always defended him, despite being a woman and my mother,
you treated me differently because I had a voice, and blamed it on my horoscope.
Years of mental and physical abuse, and years later, I still can’t forgive you,
I was treated worse than a step child in many matters, always being “the other”.

Suicidal thoughts were on my mind for years,
and a bad psychological headache,
thank god for some good friends I got,
who helped and made me sane.
Those cuts on my hand is a reminder to never harm myself; I was already harmed by the harasser.
Remind yourself again and again, “you are not the perpetrator”.

A happy ending is not always the case, for my mind closed up for years,
a confident student and a topper was reduced to average because of no support,
I cannot tell you how much I hated everything I faced,
I cannot imagine what girls go through only because of their gender.
Yes you can move on and be strong, but years later things start again,
for the “uncle’s” daughter is getting married and her love marriage is a celebration.
With crores of expenditure and lots of dowry, the boy she chose was considered good,
my parents attended and forbid me to say anything bad, and yet they said that love marriage was no good,
for whatever others do, I should not, for we will not support you.
Because, “in love marriage one sly person traps the sweeter one” and there are no exceptions.

Today you call yourself “woke” because I am 27 and studying and unmarried,
The constant ridicules are all forgotten by you,
because apparently a year of support can undo years of abuse?
”Focus on the positive”, is what you told me, how do I tell you that education is not a privilege for girls but their right indeed.

As I write this I realise, maybe I was born somewhere wrong; even when I tried they didn’t accept that they ever did anything wrong,
wrong and right is vaguely defined,
but harassment done to any one is not right,
though supporting victims under any circumstances, is never ever wrong.
I have now decided that you will never choose who touches me anymore,
everything will now require MY consent.
Maybe then my sleepless nights will end,
and I will be happy to the core.

A fire still burns inside me, for no one in my “family” supported me,
I feel I have no home or family now, and I yearn for one to find.
I think I should tell you to teach your children about this,
support and cherish them at all costs and ditch fake “uncles” behind.
No friendship is worth your children and no “uncle” is worth your mental peace!
Hear them loud and hold their backs,
and help them find their inner self,
hug them and hold them tight, and be their missing piece.

As for me, my fire still burns and so does my wrath,
someday my fire will burn everything and everyone to scath.

PS: True story of a dear friend and many others who can’t speak, don’t worry my dearies because as they sow, so shall they reap!

Child Sexual Abuse Awareness Month [CSAAM] is about taking back our power, our lives, even if it is years after it has happened. It’s a violence that preys on the fact that a child is vulnerable to both – the abuse itself, and to the guilt a predator burdens them with, effectively silencing the survivor. Add to that the fact that in majority of cases, the predator is someone the child knows socially, possibly in family, and who takes advantage of that fact.

We need to take this power away from these predators, and reclaim it by speaking up.

Image source: a still from the film Monsoon Wedding 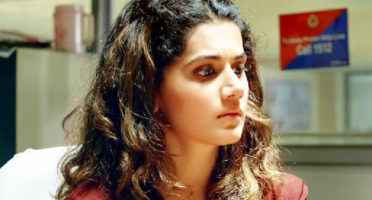