My Aunt Was A Strong Woman Who Taught Me To Fight Injustice And Be Bold!

My aunt is someone who fought against mistreatment and dominance by whoever who tried to put her down. She taught me to fight it as well!

When it comes to powerful women in my life, my Aunt X’s name is the first I think of. Let’s call her Aunt X since I don’t want to disclose her name.

I have known her since I was a kid as we would go to our hometown during vacations and spend a lot of time with her. She was one of the boldest most courageous women whom I always hold in awe.

With the medium height and build, she looked attractive. She had long thick hair that was mostly done into plaits, a fair complexion, a long nose and liquid brown eyes. When she was young and unmarried, she would wear salwar-kurtas since she lived in a small town where the effect of westernisation hadn’t yet reached. But as soon as she got married and moved to the city, her overall style of living changed. She would often try out new and different outfits.

She was the most fearless person I know

The most remarkable character about her was her boldness and fearlessness. She was a woman of indefatigable nerves whom I always admire. Aunt X was a frank and straightforward woman and would speak upfront whatever she had in mind. She would not fall in with someone whose talks didn’t make much sense to her. In that case, she would promptly disagree with the person without giving it a second thought.

Even so, she was affable and chatty by nature and would pour her heart out to her close acquaintances. She was mature and sensitive and talked very sensibly about everything. However, not everything about her was very pleasant. She has her own quirks and eccentricities which showed up every now and again in the way she dealt with others.

Deep down, she wasn’t fond of high achievers and the ones who bragged about themselves. However, anyone who was modest by temperament, she didn’t fall out with them.

She was independent and knew what she wanted

Being totally independent, she wasn’t influenced by others, she called the spade a spade. Right from her childhood, she managed house chores along with other work on her own and it gave her inner confidence. She didn’t lean a lot on anyone and if any sort of problem came her way she sorted it out herself. Aunt X had enduring inner confidence.

One of the qualities that I most admired about her was the way she stood up for herself in face of any difficulties. She does not let her inner self disturbed by the outer turmoil. A woman of high dignity, towering with self-confidence and energy, she cannot stand anyone misbehaving towards her.

After she got married, she made it a point not to bow down to anyone in the family but believed in is mutual love and respect among family members. I wouldn’t say she is a staunch feminist but she is epitome of courage and fearlessness.

She taught me to be fearless

She has certain qualities which is must for women to embrace in their life so that they lead a happy and dignified life. Women are still not at par with men. After marriage, all the housework is thurst upon women and we get wrapped up in it, putting aside our own health and happiness.

In this situation, it becomes necessary to draw a line between personal needs and family needs and women need to prioritise our health and happiness. Only a woman of strong character can do that. People around us always shake our confidence and treat us in unfair ways.

My aunt is someone who fought against mistreatment and dominance by whoever who tried to put her down. Even today, whenever I am entangled in any problem in my life, I give her a buzz and try to know her take on the matter. Somewhere I believe those tips would work for me. She is also a good friend to me whom I can count on in hard times if my life. 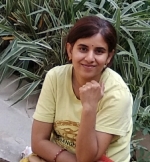 Mothers of a different kind……..