Perhaps he had expected I would jump into bed with him. Who knows? Unable to evoke any response from me he gave it up, saying that I was so inhibited; I was good for nothing!

I met him at a press conference in a plush hotel in the national capital many  years ago. It was in connection with the launch of a family healthcare product by a reputed company. Being a junior resident in one of the local government hospitals he was there to check out the product. And I was representing an upmarket women’s magazine. Don’t recall how, but the ice got broken and we got chatting; I found him polite, and amiable. Over high tea served at the venue, we further discovered some common interests. So we agreed it would be interesting to meet up occasionally in future.

And sure enough we did. From time to time when I had some evening assignments he would accompany me to dance recitals, jazz concerts art shows et al… It was impressive to observe his interest in, and knowledge about so many topics under the sun.

I also discovered a poignant aspect of his personal life. A few years earlier he had suffered failure of both his kidneys. Apparently this ailment ran in his family. Tragically one of his older siblings had died of kidney failure. To cut a long story short, he had received a kidney from his father (who had since died) and was therefore practically living on borrowed time. His doctor had predicted he would not last beyond another five years.

Against this backdrop, his enthusiasm, and joie de vivre filled me with awe and respect. No, I did not harbour romantic notions of any sort. Just pure and simple appreciation for his stoic behaviour. He would often drop in at our home and gradually developed cordial terms with my family. In fact the story of his life was so inspiring that I wrote a feature on him which was much appreciated after publication in a health magazine.

And then he tried getting physical

All along I found the doctor was a decent and well behaved guy until one day an incident proved otherwise.

Actually, I would often hang around at his hostel during vacant weekends since his college hospital was not far from my home. During one such occasion he suddenly began to behave in a weird manner. He crept up and sat very close to me and attempted to hug and caress me, and also tried to kiss.

Stumped, I found his overtures truly sickening. Perhaps he had expected I would jump into bed with him. Who knows? Unable to evoke any response from me he gave it up, saying that I was so inhibited; I was good for nothing. Fancy a normal youthful female behaving in this manner, he concluded.

I was not attracted to him that way…

At this point, I looked straight into his eyes and told him point blank that I was NOT in love with him at all. Nor was I physically attracted in the least. To me he was just a good friend. Period. Whatever be the nature of relationship between two people of opposite sexes, lust and a sexual relationship couldn’t come to the forefront at the very outset, I further added.

He accused me of being a prude, to which I said nothing.

Following the incident I made up my mind to henceforth meet him only in public places, and never again in private. He must have been disappointed, for our phone contacts grew less frequent and no meetings happened. The last I saw of him was at a south Delhi business district. Recovering from a recent accident he hobbled along, aided by a prosthetic walking stick. We spoke cordially as if nothing had happened and I wished him a speedy recovery…

This was nearly twenty years ago and given his precarious health conditions, I suppose he might have already gone away to a better world. Barring that little incident, I still carry pleasant memories of our times together… 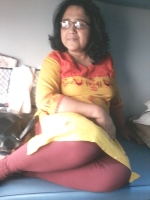 Am a trained and experienced features writer with 25 plus years of experience .My favourite