As women, we're horrified by the Hathras rape victim's ordeal, but as Savarna women, we must ask ourself if we too are complicit in this caste based violence.

As women, we’re horrified by the Hathras rape victim’s ordeal, but as Savarna women, we must ask ourself if we too are complicit in this caste based violence.

TW: This has discussion of rape, caste-based violence, and violence against women, so survivors may be triggered by it.

You are angry. I can see that. I feel your rage too.

What happened to the Hathras rape victim is horrifying. We recount again and again of the way her body was brutalized. How her poor mother was not even allowed to see her dead body, even as we in our outrage, constantly share the visuals of it.

Why do we feel the need to dwell on the graphic details?

We need to have a conversation, about why we need all these detailed descriptions of violence to outrage and empathize. Why we let other cases of gender and caste based violence go unheeded, simply because they are not ‘brutal enough.’

It says something about us and about how normalized such incidents are, that we can only feel outraged when something so extreme happens.

The Vishaka case that gave this country its law to tackle sexual harassment at the workplace emerged because of the rape of Bhanwari Devi a Dalit woman by UC men.

The petition bore no mention of caste. The erasure of caste has been a key facet of "feminist engagement with law".

Many of us are invoking Nirbhaya. And yes, that was horrific. But this case is more like Khairlanji, in which four members of a Dalit family were killed because “the entire village which was dominated by OBC caste groups of Kalar, Powar and Kunbi, could never come to terms with the fact that these two Dalit families have risen economically, educationally and have began the task of self asserting.” The women of the family – Surekha and Priyanka, were paraded naked, raped and mutilated. The date of the massacre, a chilling coincidence, 29th September, 2006.

The court, when it announced its judgement, refused to invoke The Scheduled Caste and Tribes (Prevention of Atrocities) Act, 1989 and held that the murder was based on revenge and the caste was not at work here.

Caste is certainly a factor in this case

Which is the same as the constant refrain that I hear now, from many Savarna women, who claim that the rape of the Hathras victim was ‘purely a gender issue’. Including from journalist Pallavi Ghosh, who didn’t want to “reduce” the crime to a crime against a Dalit.

And that is where we are wrong. Because intersectionality is relevant here. Yes, all women in India have the fear of rape constantly hanging over our heads, but for Dalit, Bahujan and Adivasi women, rape and exploitation are a much more stark reality.

As this Human Rights Watch report points out, “the use of sexual abuse and other forms of violence against Dalit women as tools by landlords and the police to inflict political “lessons” and crush dissent and labor movements within Dalit communities,” is not uncommon.

Not just the crime, but even the follow up to it reeks of casteism

Violence against women is systemic – here we have upper caste parishads coming out in support of the #HathrasCase accused. This case is a part of the larger structural violence against Dalits. A heap of figures, case history and social justice argument backs this. READ UP on this https://t.co/U0zHs3GlLI

Her rapists have the support of the ‘Savarna Parishad.’ Her family has been denied the opportunity to perform her last rites, and her body has been burned, even as they were locked away.

These things would not happen to us savarna women. We are protected by our caste privileges here.

Upper-caste perpetrators like Thakurs in #HathrasCase doesn't get impunity from the sky. It's their caste network & political support that provides them with the impunity.

Why the hell shouldn't we bring caste, make it political? #HathrasCase is fucking caste-based & political.

To quote Meena Kandasamy’s poem, “In a land where Dalits cannot rule, they cannot rage, or even mourn. This has happened before, this will happen again.” 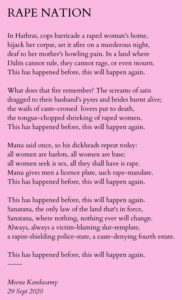 So please, stop pretending like the Hathras rape victim’s caste doesn’t matter here. Unless we examine our own caste privilege, and see how our silence and defensiveness on caste are a part of the problem, unless we are willing to own up to our complicity in this (yes, even if we are feminists. yes, even if we are allies), we are being unjust to her, and to many like her.

And I realize the irony of saying this, as a savarna woman, in this context, but we MUST stop taking up space. Even as we outrage, we must do so by amplifying the voices of our Dalit and Bahujan sisters, whose opinions, and emotions on this issue matter far more than ours.

I was looking if any upper-caste women would say ’NO’ to the television debates on #Hathras case recognising their privileges and complicity in violence against Dalit women.

As usual, NONE! They were nicely sitting and exploiting our spaces. Will they ever feel shame?

5: Instead of questioning their own families,Men & Caste kinships, they extrapolate themselves into the large category of women as equal to Dalit women. There lies their viciousness, materially they are not deprived, they partake from the caste property as well as rip DBA labor.

That is the only way we can move this discourse forward, and perhaps find a solution, so that there are no more Dalit Bahujan Adivasi rape victims.

Author’s Note: The author of this piece is a Savarna woman. The intention of this post is to spark a conversation among savarna women about our complicity in maintaining the caste system, and the urgency of the need to break down these oppressive structure. This is not an attempt to occupy space that rightfully belongs to Dalit, Bahujan and Adivasi women.