She Was The Unquestioned Queen Of Her Throne

People who are looked down as physically challenged, set benchmarks of physical fitness and endurance. See how many sports are listed here for the differently-abled categories.

Today she looked no less than a resplendent queen perched upon her regal throne. The golden and silver circles sparkled on her breast like her royal ornaments. Together we steered through the applauds and cheers. For the first time, she owned me with so much pride. I, her constant ally and her partner for life.

As I narrate this, the memories of that day, not long ago, come gushing back.
The last rays of the sun were melting into sepia skies, when we went to the neighborhood park with her two little boys, for the first time after her divorce. The people’s stares bore into her. But unheeded, she kept staring at the fading sun lost in a cacophony of her mind.

Moments of peace had always been short-lived for her. Soon she was jolted by the screams of her children, “Mom, help! Help mom!!” A dog was chasing them insanely.

She screamed back, “Someone help, please please, someone!” But no one stepped forward. As for her, she knew, she could not chase it away, not in a lifetime. So on impulse, she lifted a huge rock tucked in the soil fencing a shrub nearby and hurled at the dog. It landed way ahead the target, right at the feet of a lady missing her only by a whisker. And that’s how the usual vilification exercise ensued. The people always considered it in their right to reprimand her, not for the mistakes she made, but for the grave mistakes that her fate made while creating her.

“You wanted to put me too in a wheelchair like yourself? Or has polio-affected your eye-sight too?”

“Oh don’t tell her. She has too many curses upon her head.”

“Now that her husband has left her too, she must be going insane.”

“How is she going to survive like this, with two kids and ageing parents, I wonder.”

The remarks would have continued unhindered, had not Rohan, her childhood friend and a gym instructor, come to her rescue.

“Aunty, she was just a mother trying to protect her kids. She did what any other mother would have done. Plus no one got hurt. So, let us leave the matter here, please!”

As soon as the crowd dispersed she pulled her boys close and said, “No one would step in harm’s way for the sake of my children. I picked up whatever was within my reach.”

“I know,” Rohan said picking up the rock from the midway and putting it back in its place. “This is indeed heavy. Looks like some 3 kg. That’s why aunty was scared.” He said dusting off his palms. “How did you manage to throw it this far?”

“Do you mean how did I manage with my dysfunctional body?”, she asked.
He plopped down and uttered, “With my experience in weight training, I know its tough to throw even 3 meters ahead from a stationary position like yours.”

After momentary silence he began to talk as if to himself, looking away from her, “You know, one should never underestimate oneself. Sometimes, in the face of adversity, when the onus of outcome lies solely upon you and when there’s no hope for help, you end up outdoing yourself. We are capable of much more than we think we are.”

Suddenly mist clouded her vision and she murmured, A jobless person like me, who isn’t even sure of her basic capabilities, then how to gauge MUCH MORE?
“Keep faith. He gently pressed her palm. Someday opportunity knocks at every door, only we should be brave enough to seize it.”

She thwacked me hard on the wheel before heading  home.

The night sky was bereft of stars. “It will rain.” She told her children and climbed in bed with them. “Mom, when will we go back to school like our friends.” They asked again, like a night ritual to them.

And she being the doting mother who wouldn’t trade the glint in those innocent eyes for anything, replied with utmost conviction, “Very soon, my children.”

It was almost midnight, when she was roused again by the sounds of incessant cough from her dad’s room. Her mother was pacing up and down the alley with the medicines and glass in hand. Outside she could hear the sky pouring. She tried with all her might, bending in every direction to pull me closer. But every attempt went in vain. The sounds of cough kept getting louder by the minute. In utter dejection, she squashed her legs in the vain hope of finding some sensation. But with every stifled sob, she ended up cursing me even more, “You harbinger of misery, why can’t you let me be. Vanish from my life. Won’t you? Why?”

The next morning she woke up to a bright fervent sun and went to check on her dad, “How are you feeling dad?”

“For my age, I am doing fine. Nothing to worry.” He said smiling.

“You should get yourself checked, this cough is becoming more persistent.”

She suggested, knowing fully well that with his meager pension, as their only source of income, it wasn’t even an option.

“You know I wanted to show you something.” He grabbed a newspaper from under his pillow and handed over to her.

“National Paralympics to be held in March”, the headlines read.

“I never knew about this.” Her father said sitting back right up feeling a sudden surge of energy in his body.

“Isn’t it interesting and inspiring? People who are looked down  as physically challenged, set benchmarks of physical fitness and endurance. See how many sports are listed here for the differently-abled categories.”

She kept gazing at the newspaper for long, then something transpired, I can’t say what; but she had never been the same again.

For the next six months, everyday , she would drag me to the strangest doors at the oddest hours in the weirdest ways.

Rohan’s gym was the first door to be knocked at 4 in the morning. “But I am a fitness trainer, not a sports coach,” he remarked rubbing his eyes.

She handed over her phone playing the shot-put, javelin and weight-lifting videos and said, “Since there’s no one to take me to the stadium every day, this is my only coach and you are everything else.”

The next in line of our visits were various NGO’s (for financial assistance) and sports ministry offices (for category certifications and Paralympics registrations).

But what displeased me the most were the 3 am visits to the local park which made me creak under the weight of those gigantic bars and balls.

But today as I look back, it all seems worth it. She has won a gold in shot-put and silver in the javelin throw at the National Paralympics and now there is no stopping.

A few days back, I heard her teach her kids, “Life always offers you two boxes. One of misery and one of beauty. Most of those who open the former first, never dare to open the other for the fear of worse. It only takes a brave heart to make that leap of faith.”

PS: The story, though a work of fiction, draws inspiration from para-athlete Shweta Sharma, who despite all odds achieved what is still unthinkable to many in India. Such para athletes are remarkable examples of determination and resolve, not only for the physically challenged but for all those who think they are challenged in life by way of body, mind or circumstances. 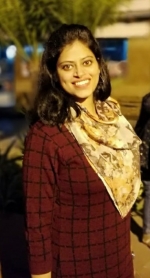 No Matter What He Did, He Was The Apple Of My Eye, Wasn’t He?

Happiness, And A Mouthful Of Golgappas