Shame On The Shamers: A Story Of Body Shaming

Even though a lot of us have to go through a tough journey with our bodies, it is a steady work in progress and we come out stronger.

It has been years since I came up with ‘Talk To a Stranger‘. This has been a beautiful platform for strangers to open up and talk about things that they wouldn’t share otherwise.

A few days ago, a lady named Anika had reached out to me, wanting to talk about many things that had been bothering her. I set up an appointment with her at a cafe in the city.

I walked into the cafe and called Anika to let her know that I had reached. She told me she was at Table 6. I looked around and spotted her.

Me: Hi Anika! I hope I didn’t keep you waiting for long!

Anika: Hi Reshma! I just got here around 5 minutes ago.

I sat down in front of her.

Anika: I have a lot to share… I think I will start right away!

I nodded without interrupting her.

Anika: I am an only child at home and I am also the only granddaughter on my father’s and mother’s side. I was brought up in a very pampered way. I have always been a chubby child. When I was around 6 or 7 years old, there was a time when I shed a lot of weight as we had moved to a new city. My maternal grandmother took me over during the holidays and fussed over me saying I was too lean and skinny. After a year or so, I moved back to my hometown with my parents.

Over the years, the fussing and pampering continued. Relatives would show me their love by getting me snacks and fussing over me to eat it. I was a child, obviously I couldn’t differentiate between junk and healthy food and I enjoyed all food.

Eventually I hit my teen years. I would find solace in food whenever I felt low. There was a time when I would eat because I missed having my own group of friends. I put on a lot of weight.

It was time to start the 11th grade. People would look at me and laugh. They’d call me ‘moti’ (or fat). (I wished to go back in time and change how I looked. But the damage was already done. I started hating the way I looked.) Amidst all this, I did have my little joys which included reading books, drawing, listening to songs. Yes, I  found myself becoming more of an introvert.

During this time I was down with chicken pox. You’d probably be aware about how one is left with the marks even after one recovers from chicken pox. The marks take time to fade. As if falling ill wasn’t a shocker, I had classmates asking me if my marks would fade or if I would ever look the same. I had my own uncle telling me I looked like a monkey. This moment hurt a lot but I held back my tears. The taunt from this particular relative never stopped since then.

Every time this uncle or any other relative saw me, they’d tell me to lose weight. There were times when some relatives would say that my mother looked like my younger sister. I obviously knew in what way they meant it and would just laugh it off.

Years passed and I thought people would stop talking about weight, now that I was nearly 25. I was wrong. My uncle did not stop calling me things like pig, barrel, drum (other words that you can call someone to hurt them like hell). I’d smile through it all and brush it off..

Deep inside me, I’d be a mess.

I turned 27 and just before my wedding, I had relatives insisting on me losing weight and becoming fairer. I was happy with my skin tone. However, I did push myself extensively to lose that extra weight. A few days before my wedding, my uncle told me, “Now that you’ll be married, I hope you don’t eat more and become double the size you are. Work on losing your weight.” I just kept quiet.

Reshma, you won’t believe it. I met my uncle just last week and while having lunch he said, “You seem to look fine now. Maintain the same weight. Don’t put on more weight.”This was right when I had put the food into my mouth. I didn’t feel like eating at all. I felt terrible.

I just got to know what body-shaming meant one year ago. But I was surprised to know that I have been subject to it since my childhood. The best part is, such relatives or people don’t even want to take that minute of effort to understand me and continue to talk about my body and my weight.

I have gone through self-hate, I have isolated myself from people because of being called names and I have stopped liking anyone’s company. I can’t bear to feel confident in my own skin. It hurts so much to even love myself for the way I am. Do you know what this has led to?

Well, I have hormonal imbalance, thanks to all the stress! I am wiser and I am able to differentiate between junk and healthy food. But what about the younger me that had to hear so much from people who loved to criticise?

I may look all happy on the outside, but trust me, I am a total mess on the inside. Today, I am 27 years old, but my height and weight has pretty much been the same over the many years- 5 feet and 63 kgs. But why do people see only this? Why am I still called fat? Why don’t people see me for who I am? Why doesn’t anyone take the effort to look at how I am on the inside?

Anika sighed as she broke down

Me: Anika, I know what you have gone through isn’t easy. I have been there myself. Don’t be so harsh on yourself! It’s about time you ignored such people who taunt you by talking about your body.

People like your uncle are many in number out there. Such people in my opinion may simply be jealous of the fact that you have a good life and they don’t. Hence, to bring you down, they talk about your physical appearance.

Anika: I understand this, Reshma. But there are days when I feel so vulnerable when people talk to me about my weight. I do love myself a little better now. But the trauma still exists!

What will it take to change such people and their thinking?

Note from the author: All characters in the story are fictional. Any resemblance to a living person is purely coincidental.

Question from the author: What would you like to tell Anika or others who have faced or are facing body-shaming on a daily basis?

P.S. Anika is just one amongst the many who face such incidents on a daily basis.

Such tags never end, especially for a woman. I hope there comes a day when a woman is respected for who she is and not how she looks. I also hope that society looks beyond physical appearances of a person, irrespective of who they may be.

So, the next time you are about to talk about a person you don’t know or are about to comment on someone without knowing their story, hold your thought… Say something kind instead! 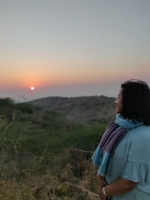 Words can create or break!