This time, Ranjana made sure that her daughter’s dreams were not curbed. It was not easy, since Arkoja also hadn’t been spared the wrath of the rest of the family as happened to her years ago.

Ranjana entered the room quietly and found Arkoja glued to her books.

“My decision won’t change, maa,” Arkoja said, without looking up.

Arkoja’s University results had come out the day before. She passed her graduation with flying colours, first class first in English major and as the university topper.

Now, this definitely demanded a celebration but all hell broke loose in the “Mukherjee Villa” when Arkoja announced her decision.

“You failed as a mother”

“If only the mother was a bit more careful,” the frustrated grandparents remarked. Even Supratim, Ranjana’s husband, bashed her, “You failed as a mother. I hope you can see that yourself.”

Twenty-three years of marriage and still she couldn’t be the ideal daughter-in-law of the elite Mukherjees of Bhowanipur, even at the cost of everything. Her own life flashed before her eyes.

Hailing from a middle-class family, Ranjana probably had the best childhood she could even dream of. All that was thanks to her school-teacher parents who had always been the pillars of strength and inspiration for their daughter. She was a happy soul, engrossed in her own world of books, music, art,  and social services.

But the biggest dream she nurtured was that of making it big in the literary world one day, as a renowned author. Her decision was equally applauded from both of her parents. With this dream in her eyes, she took admission in Jadavpur University only to move forward with her parents’ blessings and never looking back.

But fate had something in store for her!

Changing fate and the life after

She met Supratim in the college. The only torch bearer of the blue blooded Mukherjees, Supratim was the heartthrob of the university during their times.

So, when he proposed her, she was taken aback. They had nothing in common! Initially, his parents were apprehensive of this alliance owing to their societal differences but finally gave in for their son’s sake. All went well. It was like a dream come true.

Reality hit Ranjana hard after marriage. She was misunderstood, judged and looked down upon at her every endeavours. Surprisingly, Supratim remained silent at all these. He behaved like a typical Indian son when it came to realising his wife’s dreams and careers. ‘After all, these don’t fall under the criteria of an Indian son!’ Ranjana often thought.

She missed the warm, empathetic, loving person she used to know. How marriage changes everything! She never got a chance to write anymore, to join a literary club or attend authors’ meets! The dreams died over the course of years.

Arkoja the apple of everyone’s eye

Things started to change for the better when Arkoja was born. She was indeed the apple of everyone’s eyes. As she grew up, she proved her mettle in almost everything she did.

Right from her childhood she was a school topper, won accolades in quiz competitions. And to her mother’s immense pleasure, she was an ardent literature lover. Everything was smooth until her first board exam results came out.

Amidst the galore, Arkoja expressed her desire to pursue humanities and dismissed all other opinions.

Then, all hell broke loose!

“I’ll choose my own thing. It’s humanities that I love and I’ll go for. The discussion ends there,” she had declared. It was never the same again with her father and grandparents. Despite their repeated efforts to change her decision, Arkoja was stubborn.

In class 12, she passed her exams with enviable grades. Then, she opted for comparative literature at Jadavpur University– the same place her parents had met years ago.

Immediately on entering college, she was recognised as an outstanding student. Other than that, she also became popular as a content writer and theatre artist, much to her family’s dismay. Only her mother was delighted.

This time, Ranjana made sure that her daughter’s dreams were not curbed. It was not easy, since Arkoja also hadn’t been spared the wrath of the rest of the family as happened to her years ago.

History will not repeat itself!

“Maa?” Ranjana was so lost in her thoughts that she almost forgot Arkoja’s presence. “History won’t repeat itself this time. I know everything even though you didn’t tell me anything.”

A stunned Ranjana looked up and met her daughter’s eyes, shining with determination and grit. She had never let their marital differences affect their daughter yet what she was upto today?

“Forgive me. I came across one of your journals some time ago. You were a gem of a writer, maa. Why did you quit?” Arkoja asked

“I didn’t want to anymore.”

“Rather, you weren’t allowed, maa. See, what you’ve done all these years. You have given up everything, your dreams, hopes, passion yet they never acknowledged your efforts. Even baba failed to fathom what his wife went through. He failed to see how it was to live without dreams, to be confined within the four walls of the house.

“And you never fought for your rights, for the things you loved. Simply because you cared a lot about them. But I am not like you. There’s no bravery in living a life defined by the rules of the society,” Arkoja continued.

“Promise me one thing, maa”

“I don’t want to live a life where I have more regrets than memories, maa. And I shall be the maker of my own destiny. As for now, I have decided to take the offer by the digital media. I will be the content writer for their upcoming web series. This was a decision taken years ago. Now, please promise me one thing, will you?” Arkoja appealed to Ranjana.

“What”? Ranjana said, unable to meet her daughter’s eyes.

“Start writing. All over again. I’ll be with you,” she said.

Ranjana looked at her daughter and recollected her favourite line by her favourite author, “I’ll walk where my own nature would be leading. It vexes me to choose another guide.”

If only she had her daughter’s courage to beat all odds, just when she needed. 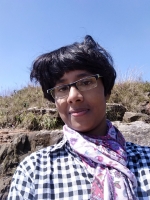