Have you ever read a book that has left you with tears in your eyes but hope in your heart? That’s exactly what the writer felt while reading The Elephant Chaser’s Daughter.

The Elephant Chaser’s Daughter is a memoir penned by Shilpa Raj. In the book, she fetches all her experiences and recounts her childhood memories to deliver a moving piece of literature.

The book gives a sense of hopefulness in the time of darkness and proves to be a compelling read. It takes the reader on a roller-coaster ride full of heartwarming and heart-rending events.

From abandonment to education

Shilpa enumerates the heart-wrenching experiences of her childhood and confronts them head-on. For years, she struggles in a society that subjugates women and with the oppressive practices and customs of her family. Adding to this are the constant undermining words of the village elders because she was born a girl. The fact that she was to be killed at birth but was saved by her grandmother, are just some of the grievous incidents of her life.

All this forces her to accept that reality is terrible and she comes to a conclusion that this reality is not something she wants to be a part of. Nor would she want to wish it upon herself. Thinking thus, she sets out to build a world where she would want to live. 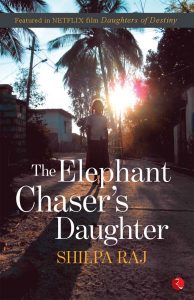 Being abandoned by her own family proves to be the last straw and only adds to her pain and despair. The desperation to flee from the misery along with the wish to put an end to all her anguish, leads her to have a fortunate encounter. She meets a philanthropist who takes her to a boarding school, Shanti Bhavan.

Education provides her with a vision that there is a world out there which is filled with plenty of opportunities and offers empowerment. When she returns to her village, the contrasting lives between the two worlds she had witnessed becomes clear to her. She is constantly torn between the two worlds. One of servitude and injustice and the other of opportunity and empowerment.

A plot twist in her life

A sudden turn of event catapults her into the face of despondency and drives her towards the path of grief and desolation once again. The unforeseen death of her elder sister under incomprehensible circumstances shatters whatever stability she had in her life.

This tragic event leaves an immense impact and leaves her feeling vulnerable and raw. The aftermath of this cataclysmic incident acts as the final blow to her already upturned life. And she ponders over the thought that she doesn’t want to offer herself to the grip of the same sorry plight. Neither does she want to be withheld under the weight of such repercussions.

Pulled in opposite directions, and torn between despair and dreams, Shilpa finally decides the direction she wants to move in. She chooses a career that would satisfy her soul and make her feel at peace.

Her choice to pursue writing as a career brings in a turmoil within her family whose traditions and customs foretell her to get married. And then being involved in setting up a family of her own. But she refuses to follow the traditional route and instead sets out to build her own future.

The Elephant Chaser’s Daughter holds that sense of yearning and longing that one has. It has the desire to accomplish his/her/their ambitions and aspirations. While it has some disheartening events that bring the readers to tears, it also has the sagacity of optimism. Narrated with utmost honesty, the book is raw and would rattle the very foundation of a person’s perception of situations.

Isn’t there always a ray of hope?

This book can be thought of as a compilation of gleeful days and sorrowful recollection of memories. The chapters are a mix of hopefulness, detestation, desire and a craving for being able to decide the fate of one’s own life.

Shilpa Raj gives an insight into the lives of people ruled by poverty and discarded as ‘untouchables’ by the society and what it truly means to be born in such a family. The hardships, the constant despair and piping dreams of achieving the riches were remarkably pronounced in Raj’s narrative skills.

Why I liked the book

Her articulation of her feelings into words will definitely leave the readers in awe. The depiction of her memories coupled with her expansive vocabulary and no grammatical errors only makes the book a supercalifragilisticexpialidocious (yes, that’s the exact word I’d use to describe it) read.

By the time I ended it, I was shaken by the ordeal she underwent and all the heart-wrenching situations she had to encounter in her childhood.

I am not into non-fiction but this book is something I don’t regret reading. Not even a single minute. It truly, is such a contrast to my life. Despite facing all the hurdles and accepting barbed words, after going through what she did, Shilpa Raj had the strength to get back on track. I also admire the sheer buoyancy she carries within herself.

Now, this is what I call a book. It has life in it and gives readers the chance to step into Shilpa Raj’s shoes and feel what she had felt while reliving her memories. The high tide is sure to make you emotional.

I’ll recommend The Elephant Chaser’s Daughter by Shilpa Raj to everyone. Her memoir includes every component bound to give you a heartfelt reading experience. 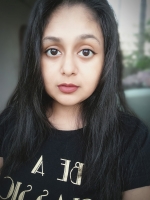 I am a writer and book blogger from India. I have an affinity towards books,