Ayushmann Khurranna steals hearts once again! This time with his rendition of a what it really means to be a "gentleman." Here is why we are loving it!

Ayushmann Khurranna steals hearts once again! This time with his rendition of a what it really means to be a “gentleman.” Here is why we are loving it!

In a video that is going viral, actor Ayushmann Khurrana breaks down what it really means to be a “gentleman.”

The video, which cleverly never mentions the words “toxic masculinity,” begins by listing the major stereotypes about men –that they must be “macho,” providers and protectors, who do not cry or feel weak. Then he goes into what kind of a man he aspires to be –“jo ro sake, jo gaa sake, aisa man banna tha” (I wanted to be a man who can cry, who can sing). A man who perhaps can’t wear a tie to perfection, but who can cook decently.

The video also calls for inclusion, saying that a man is not and should not be defined by his sexuality or caste. Speaking about the sort of mixed messages that are sent to young boys, he says that they are told to become gentlemen. But that are also taught that “gentleness” in boys is bad.

Why should women die for you?

My favourite line, comes when he speaks about advertisements and social messaging that encourage men to act “cool” and “tough.” Only then will girls “die for them.” After a thoughtful pause, he follows that up with– but why should they die? They shouldn’t die. A woman shouldn’t fear a man or his presence.

He then goes on to destroying the aforementioned stereotypes, saying that men too can like pink, be bad at driving or working with machines. They, too, feel afraid in the dark, because they too are victims of patriarchy, sexual assault and violence.

Being a man is to be honest

He goes on to say that the only condition to be a “man” is honesty. And speaks about how he raises his children. How he teaches them that being a gentleman isn’t about empty chivalrous gestures like opening a door or pulling a chair for women. Instead, it is about being the first to speak up when they see something wrong happening.

The video shared by the The Man Company (a men’s grooming products company, which has Ayushmann as their brand ambassador) on its socials, is written by Gaurav Solanki.

The video is being shared widely

On YouTube and Instagram the video was shared along with the caption, “What makes a true gentleman? Is it his suit and his tie? Or the fact that he isn’t afraid to cry? Is it the way he shoulders tradition?Or the fact that he is a good son? The way he treats women or the way he is a master in the kitchen? Is it the way he stands up for what is right The way he is always fair in a fight? Or is it in his heart, Which pains when another is hurt? This #InternationalMensDay @ayushmannk and #themancompany celebrate the modern gentlemen. #gentlemaninyou.”

The video has been widely appreciated online. However most of the cheers seem to be coming from women. While many men have praised the video, some seem to believe that men are not the problem– it is women. If only women stopped expecting so much from men and took up equal responsibility (insert eyeroll)! 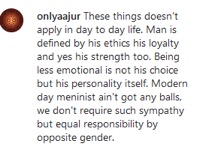 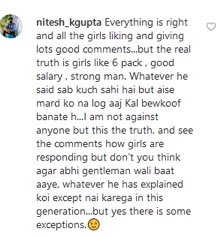 Perhaps we should just be thankful that the backlash to the video does not seem to be as vehement as it was for the the Gillette ad about toxic masculinity. In fact, Gillette even took a financial hit because of the ad.

One hopes that men will embrace the message delivered by Ayushmann this International Men’s Day. Because, ultimately this is a problem that men must solve for themselves.