Not All Singles Are So By Choice, Stop Pestering Them!

Singles are constantly being told to get married. However, what if a person is single and waiting for the right person? Read on to understand them.

The journey through the slow and steady persuasions of marriage!

OMG. It is the painful journey that singles have to go through every other day.

Day in and day out, there is emotional drama, over possible matrimonial prospects, just hovering over your head. You get caught in a terrible catch-22, where you can’t escape the drama and neither can you eventually give in. Especially, when everyone has fancy demands and expectations of you.

The drama of the matrimony

You might be the main character of the drama, but the protagonist is someone completely different. And that is someone close to you, someone who just doesn’t seem to understand you. So, you basically have to listen to all their convincing stories about every matrimonial prospect while pacifying their emotional drama. At the same time, you also need to stop yourself from making any hasty decisions in the flow of emotions.

A small nod to anyone could just be a life changer, thus, singles struggle to keep a balanced mental state in such conversations.

To give up and change directions

After trying to convince your siblings to get married, some relatives just give up on them. However, giving up on them means, you are now their focus. And they all get extremely excited to see you as a bride/groom and see you settled.

Not that they have any bad intentions, but what they don’t get is the fact that you aren’t single by choice but just waiting for the right person.

The two types of singles

Talking about singles, there are singles of two types.

The first type are the people who have decided not to tie the knot. No matter what their background is, they prefer to be single, or rather live without any commitments.

However, the second type of singles are those who want to get married. But they are willing to wait for the right person and the right time.

Such singles are considered to be adamant, stubborn, snooty, egotistic and non-adjusting. While these singles have a clear idea of what they want from their partners but are often unable to express and explain what they want.

Is marriage a mere box to be ticked?

Today, while I was sitting after facing a horrifying moment of pressure of agreeing to meet a random matrimonial candidate, I felt helpless. Add to this, the pressure of having to make up my mind about one of them.

My kind of a man

I have been going through such pressure and dealing with questions like, ‘what exactly do I have in mind about marriage and men’. When asked about men, I get this weird feeling, because for me, it’s not just a man, it’s a companion who completes me. He is a very important part of my life. Like a limb completes a body, he would be the limb to my soul. He is a beautiful creation and merely calling him ‘man’ would be a disgrace.

I am not saying this always happens, but I just want people to understand that after a certain age, when things become uncomplicated, you know exactly what kind of a person you want to spend your life with. You have grown spiritually, and are sure of several things. It is at such times, that it becomes difficult to just go ‘inky pinky ponky’ and finalise a person simply because he is well settled, average looking, has a head full of hair and no liabilities.

For me, the need is different. I am sure there are people like me would rarely have been able to express their needs in words. But while sitting and pondering today, I could make some sense of what I wanted.

The love I seek

I want to have a ‘connection’ with someone whom I finally have the urge to live and grow old with. And I want to continue looking at the same face every morning and before sleeping every night.

There’s this urge I have, that of being like those old couples I see. The couples who hold each others hands to cross roads, to climb stairs in movie theatres (I have seen couples help each other find their seats in movies that show frivolous love stories). I want to be like those couples who read lame jokes on their mobiles and laugh without any care of where they are. Like those couples that admire the wrinkles, grey hair and live and love like that despite being together for a very long time.

I want to be someone’s forever and have the assurance that the decision I made about this person was the best one I ever made. You know those couples, who are there with each other in the silent beautiful memories in the last minutes of parting? That’s the kind of love I want.

The journey is dreamy, yet I believe in it

It does sound dreamy and I am aware. But it’s me, I believe that someone with the same philosophy is created diligently and specially for me. We are both probably experiencing our share of life’s ups and downs before we are prepared to be with each other in the beautiful partnership.

The sad part is that, such a dream is inexplicable especially when you are in the matrimonial process at that typical age when you have been hit by a sense of clarity. People might call it ‘rigid’ but I call it ‘clarity.’

With all due respect to their intention, I have an urge to speak on behalf of all the singles of the world. For us, marriage is a very important element in our lives. We can’t just play a game of hide and seek and take a sudden leap in getting our partner.

We are ready to be patient, hopeful and happy in our journey to reach the destination. The journey doesn’t bore us. In fact, we are happy to explore and evolve. 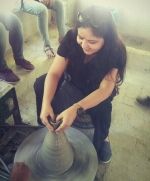 Not Having To Share Your Pizza And 6 Other Reasons Why Being Single In Your Twenties Is Awesome!

Single. Indian. Female. Are You Ready To (Seriously) Date Again?