Students of St. Francis College for women in Hyderabad have alleged that their college is forcing them to wear knee-length kurti so that "they get good marriage proposals" and wearing short tops garners “unnecessary male attention from the staff”.

Students of St. Francis College for women in Hyderabad have alleged that their college is forcing them to wear knee-length kurti so that “they get good marriage proposals” and wearing short tops garners “unnecessary male attention from the staff”.

It is not new for society to moral police women for their behaviour. If the society doesn’t think the girl is ‘sanskari enough’ then the best thing they do is to use their power and impose their ‘comfortable beliefs’ on the girls with sexist explanations.

The students from St Francis College for women are facing a similar situation.

St Francis College for women is an all-girls college in Hyderabad and is recently in the news because of its recently imposed really strict dress code which wants girls to wear ‘knee-length kurtis’. The dress code of the college according to the academic calendar is ‘jeans with long tops and no sleeveless, crop top or cold shoulder’. The students were also asked to sign an undertaking which stated this rule.

The college from 1st August onwards imposed to wear ‘knee-length kurti’ strictly or else ‘go home’.

This entire issue got tense when students alleged that the reason given by college behind this rule was sexist and misogynistic.

According to a report published in Quint, several students (about 100) on Friday, 26 July, organised a protest against this decision. They had also written a letter to the principal detailing the problems that they had with the rule.

The protest, however, was subsided by management’s power according to students the Principal asked a representative group to meet her in peace.

“Our principal, Sister Sandra, refused to address the crowd. She said, she will address only a handful of us. So five of our representatives went inside and the entire administration body along with the HoDs dismissed the protest and tried to rationalise their decision.” Student (reported by Quint)

What the students say

When we went to ask in the students in college the students alleged that many HOD’s and the management have given the reason that “this college is like a temple and the parents send their kids to this college to get good marriage proposals.” 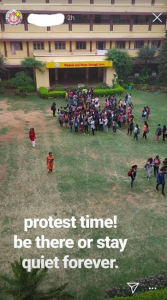 If this was not enough then students also said that when through protest they requested the management that they’ll keep their whole body covered but don’t make kurtis a compulsory thing, then the management responded by saying “we have male faculty and male workers and all of you come to college by road and not flying there will be male members looking at you which is not right or safe”.

Apart from this many students alleged that on 1st they weren’t allowed to enter college if even their kurti was one inch above the knee.

“The teachers on the entrance literally pulled my kurti because it was like some inches above the knee and my friend was stopped because her kurti had a small side slit, not just that there was a male watchman standing on the entry gate and scanning the length of the kurtis worn by girls, which made me very uncomfortable,” said a student.

Denied by the Dean

The students are alleging all of this but the management has denied it by calling this news fake. A statement by the Dean in The Hindu reads “Students used to be given a handbook which had a dress code. We updated it and informed them and their parents about it, who signed an undertaking. I interacted with class representatives to ensure a smooth implementation. The dress code is suitable for a learning atmosphere, Teachers don’t use that kind of a language in official communication. We had 95% compliance on Thursday, while some students, who were asked to change and come back, argued with us,” said Mallika Shetty, Dean (Academics), St. Francis College, who dismissed the viral post as fake.

A report published in TOI also featured the statement by the principal where she denied that the ‘marriage proposal advice” was given by the staff and said “Every family has a culture a tradition. In our college, the tradition is that we have a formal dress code. The rule has always been there as some students weren’t obeying it we are trying to straighten things out students who are making noise about it should concentrate on academics and not such trivial issues.”

On the other hand, the students allege that there was indeed a dress code of long tops and ‘proper decent clothes’ but the length of the tops like how long was never mentioned, and this rule was imposed on them without even taking the opinions of students once.

Apart from that when we asked the students if the dress code is a trivial issue then one of them said, “In a college that promises upliftment and empowerment of women imposing something on us forcefully just because they think our clothes are not comfortable for their eyes is not a trivial issue. What is weird is forcing students to follow a stringent dress code and neglecting basic facilities like proper electricity and proper sanitation in toilets which is exactly no there in the college.”

TOI also reported that On Thursday — first day of the new order — about 30 students were not allowed to enter the campus for not adhering to the dress code, and not just this many according to students many teachers missed their first hours or came late to classes because they were checking the kurti at the entrance.

Why is policing girls so easy?

So in the news, the St. Francis college students are claiming one thing and the management is claiming something else, but even if we leave the college aside and just think of normal life, we will realize that it is very easy for the society to moral police women, and it is wrongly believed that rape happens because of short clothes, it happens to women who drink, smoke, work late in the night and have a life of their choice.

It’s very easy for society to ‘teach’ women what to do and what not do to prevent crime against them, but they never ask their men to change their mentality.

Protecting women’s rights and freedoms is a legitimate concern. But our society often fails when it comes to creating paths for women to be in control of their own lives, which is wrong. Because even if she is wearing a knee-length kurti or even a burkha, if a pervert with a sick mentality wants to ‘eve tease’ her he will. Not because her clothes are not ‘decent’ but because his mentality is cheap.

Editor’s note: As told to our writer by a student of St. Francis College for Women, Hyderabad.