Malaika Arora hasn't behaved like the 'bechari' that society expects divorcees to do, and this lack of 'appropriate' behaviour has trolls attacking her with vitriol.

Malaika Arora hasn’t behaved like the ‘bechari’ that society expects divorcees to do, and this lack of ‘appropriate’ behaviour has trolls attacking her with vitriol.

Malaika Arora’s name dropped Khan a while ago. Since then, she has moved on, her ex husband has moved on, but it seems the self appointed guardians of society couldn’t move on.

They couldn’t fathom the fact that a woman and a man who lived together for almost 2 decades, had a child, could separate amicably, and the woman didn’t cut a sorry figure at all. In fact, she remained poised. She chose to live with dignity, chose her path on her own terms and she found love again. And if all this wasn’t enough to shake up these guardians, the woman is not ashamed to express that love, embrace the glow that love brings with it, and doesn’t shy away from being happy.

Now now now. THAT is way more than any of these guardians of our society can handle. It shatters our culture. It questions our traditions. It gives the woman the title of an individual rather than wife of/ daughter of/ mother of. And that, is a scary situation.

So, what do the self employed minions of the guardian angel brigade do? They troll. Yes, the mighty keyboard warriors attack the woman from behind fake accounts and super filtered insecurity laden display pictures.

Every single time the woman posts anything on Instagram, she gets abused, insulted, is name called. I am posting here some of the comments the woman got. They go from speculating if her vagina needs tightening, whether her boobs are perky and if they are, how on earth can that be because she is a mother and was married to someone. Almost every 4th comment is from a preacher. I would call these people the Desi Gyan Babas who advice Malaika Arora on how to dress, how to behave, how to laugh, how to live, how to breathe, how to have sex. 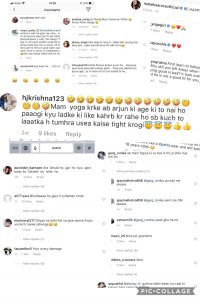 I have been following Malaika Arora for a while now on Instagram. I noticed the abuses a while back. I kept seeing them. I kept reading abusive comments and kept wondering how this woman finds the strength to live and dares to be happy even after getting such hatred.

Then, I tried telling myself maybe it isn’t so bad. So I did a little experiment. I picked up random pictures of hers. I scrolled down their comment sections and bam! Every picture that she posts ends up getting comments on her body parts and her sex life. Every single one. But why?

It seems most of the people (and here men and women both are included), are obsessed with women who dare. Bringing down such women is the sole pillar, it seems on which the culture of the entire society rests. A woman who is not meek or submissive, doesn’t bow down to patriarchy, and has courage more than there are female centric abuses, is a great threat to our nation.

I have never seen men getting trolled for choosing to move on. I have never seen men getting subjected to abuses of this calibre for dating a younger woman. I haven’t come across a single forum where people target the man’s ability to have an erection and satisfy his partner because he was once married to another female. Divorced men are never considered worn out. They are considered pros. So when they move on from one relationship to another, they aren’t burnt out. They are more practiced. But, it seems in case of women, once a man sleeps with her, her life should revolve either around him, or just continue being sad if they break up, and never have another intimate relationship because hey, burnt out, remember?

Love Aaj Kal popularised having a break up party while Ae Dil Hai Mushkil told women it's okay to break up. Don't women too deserve a life after a break up?