Article 15 is an essential movie dealing with some hard issues of caste and gender. Here’s nuanced review by a Dalit woman writer that questions some of these.

I was eagerly waiting to watch the movie. While I penned down my thoughts about the trailer, I had to make certain assumptions since it was not a full-fledged text. I was just hoping to see that the movie did justice to viewers expectation.

While the film has been successful in being sensible in engaging with certain aspects of caste and gender hierarchy, it has also miserably failed to address some important questions. Interrogating and decoding the text is what this piece of writing intends to do.

Can the subalterns speak? Oh, Yes! We can! Pass the mic to us

As a viewer I was moved by some dialogues in the trailer. I got to know that those dialogues were written for Nishad, a young revolutionary and Ambedkarite. His resistance kept on reminding me of Ambedkar’s thoughts.

However, Nishad is depicted as an underground rebel. His potential, knowledge, political consciousness, and sensibility gets sidelined by portraying him as an angry young revolutionary.

Labeling people who resist from the oppressed sections as unreasonable in their approach has been happening for a long time. Nishad’s character is juxtaposed to Ayan’s character, investigating the rape case of two dalit girls. While both intend to break caste system, their approaches are different. Their approach presents Gandhian and Ambedkarite positions to dismantle caste system.

Ayan, from a dominant caste returns to India from Europe in the illusion that India has changed and when reality strikes him he becomes a ‘saviour’ (like the trope ‘White’ man saving the ‘Black’ people).

Ayan’s act to question caste system is easier because the film maker has sketched the Ambedkarite Nishad as violent, rebel hiding underground who gets killed by the legal body. This is surely reiterating the negative stereotyping of Ambedkarties as unruly. As he is taken in the jeep to be killed, the narration reminded me of Rohit Vemula’s letter, and Ambedkar’s deep conviction. However, Nishad’s existence is erased from the film without leaving a trace, just like Ambedkar’s contribution is confined to certain discourses in Indian history and Gandhi is made a ‘Mahatma’. Similarly, Ayan is carved as ‘Mahatma’ in the end as he gathers the evidence and saves the third girl who was missing.

Resistance from the oppressed communities are negatively stereotyped in the main stream media, films and books. This movie has just joined that long list. The thought that the Subalterns can’t speak is a myth. Subalterns can speak, just pass the mike.

The film has presented Dalit women in diverse resisting capacities, however it was disappointing since the film failed to provide agency to Dalit women.

Gaura (Sayani Gupta) is a bold character who talks her mind, eventually she is presented as a girl who was supposed to get married to a ‘Dalit Man’ (Though the man is an Ambedkarite and a sensible person, Gaura’s identity is formed with that of a man she is in love with). Is that all to Gaura’s character?

We have Dr. Malti Ram (Ronjini Chakraborthy) who plays an important role in the case. However, she is not seen on the screen after she sends evidence to Ayan. Her existence is nullified.

Juxtaposing to Dalit Women, the film portrays Aditi (Isha Talwar) as conscious of caste and gender politics, well-read, independent and firm in her opinions, she is constantly referred as ‘feminist’ and ‘activist’. This juxtaposition fails to affirm that Aditi’s confidence comes from her social and cultural capital which is an outcome of caste and class. It’s true that Aditi is caste and gender sensitive. So are all these Dalit women in the film, but they will never be ‘feminist’ and ‘activist’ and ‘sensitive’ in a Bollywood film which has snatched away the agency and power from Dalit women. Aren’t Dr. Malti Ram and Gaura feminist and activist in their own way? Dalit women are just portrayed as ‘victims’ at different intensities in the film.

Yes, it is difficult for Dalit women to fight both ‘gender’ and ‘caste’ (because of the poisoned system of caste and patriarchy/brahminical patriarchy) but there are characters like Puyal in Kaala (Tamil film) which is also ‘US’. We fight!!! We don’t wait for heroes.

Also, throughout the film, Ayan plays the role of saviour which created discomfort in me as a ‘Dalit Woman’. Narratives around Dalit women should change. Kindly stop depicting us as people who should be saved. It’s the usual victim narrative that I could see in the film. We are oppressed, we are made powerless, we are made helpless but that’s not end to our stories. We fearlessly state what we want to, allow us to state what we want, we are capable of resisting with phenomenal energy.

Casteism is prevalent in urban settings as much as it is in rural spaces.

The response in the theatre made me feel disheartened about the insensibility and ignorance that comes with certain socio-economic positions. A man who was seated beside me said: ‘This happens even today in the countryside.” I was just about to screech at the top of my voice to tell him that this happens in the urban space that we live in. The metropolitan Bangalore’s social geography is a proof for caste in urban space. Why do people see it as if it’s happening somewhere else?

The film’s text had an answer which was ignored by the educated man who was seated next to me. When Ayan (Ayushmann Khurranna) says that people here are strange, they think that the shadow can pollute people, his girl friend’s question ‘What about we offering eateries serving in separate vessels in urban space?’ is the answer to all the urban elites who assume that casteism is an issue of a rural space.

The film narrative also subtly focuses on how only certain rape cases distress the population and are noticed by the state capital. The questions like ‘Why does the Nirbhaya case get nation wide attention but not Lalgoan or Sarikar case?’ draws attention to the incumbent need to focus on heterogeneous discourse around caste and space and a diverse feminist discourse.

Removal of Power Structure? Caste Away?

As stated earlier, the film has its roots in the Gandhian approach of “remove caste system”.

A scene where Ayan and his colleagues from different caste groups enter the gutter to find the missing girl plays with the idea that it’s not ‘bad’ or ‘impure’ to enter the gutter. A cop says, “Daag Achhe Hai…” a pun on the washing powder advertisement. Not sure; and I don’t want be sure of the intended meaning of the film maker, because the laughter in the theatre for this scene was blindly ignorant to the historic oppression of Dalits due to which they are still employed as manual scavengers by the government body though in records its abolished.

The scene did not posit removal of the power structure, rather reiterated that there is “nothing wrong” in entering gutter if people from dominant caste “also” do it. On the one hand there is a statement like “Don’t beg for justice. We have begged for years. Just stop working for them (cleaning and doing menial work), and on the other there is an act where people enter the soiled field to justify that there is nothing wrong in that work.

Love, Revolution, Resistance and the Everyday

While I was disappointed with certain choices in the movie, there were also moments where it felt like a worth watch. The fact that the film has addressed brahminical thought in every caste and sub-caste has to be acknowledged.

The film has been effective in bringing forth the subtleties of everyday as a political statement:

The relationship between Nishad and Gaura left me thinking about young Dalit men and women who struggle to form their identity is an oppressive system.

In the process of forming an identity the joy of admiring the beauty in simple things is snatched from us. Nishad says, “It’s been a long time since I admired the moon, I want to place my feet in the river and just enjoy the experience, I just want some peace.”

These lines remained in my mind as I walked out of the theatre. These lines will remain for a long time in my mind. Like Nishad many of us out here have lost the joy of living a peaceful life; just admiring moon and stars has become hard and tedious because of our ‘gender’ and ‘caste’ identity.’ 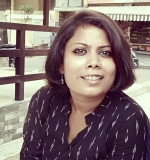 Tamil Film Draupathi Promotes Casteism And Rape, Masked As Protection Of ‘OUR’ Women