Born in an urban Dalit family, my experiences of traveling alone to places have formed a world view about Dalit women, mobility and empowerment. Here’s my story of travelling by myself.

Brought up in a lower middle class family, I had to try hard to fund my trips. There was a joy when I started to save up for traveling since I was investing in grooming and exploring myself. Even today, my family assumes that only those of the privileged/dominant class and caste can afford the luxury of traveling. Their opinion might be true since their realities are deeply rooted in their hardship. My father is an auto driver and mother a house-keeping staff member. Obviously, their wish to have a dignified and comfortable life in a metropolitan city is more important than my love of travel.

After placing myself in their shoes I figured out my own ways to travel. In the process of this self-discovering journey, I visited some places and am still in the quest to travel the world to have a broader worldview.

After traveling to some places I have realised that traveling has the potential to empower women. In a patriarchal society all kinds of mobility is denied for women. Women traveling alone have the potential to build their own ‘potential self’. I feel empowered due to the space of mobility. I’m in the journey of constructing and exploring ‘myself’.

Here is how the exploration started…

In the past three years there have been a few solo trips that have given me courage to explore the beauty of life. 20 November 2015 changed my understanding of traveling – fortunately I celebrated my birthday under the vast blue sky, gazing the ethereal stars, embraced by the cool breeze and loved by the trees around me in Manali. I traveled to Manali on a trekking programme organized by the Atal Bihari Vajpayee Institute of Mountaineering with a group of students as an NSS co-ordinator (at that point in time I was working as an Assistant Professor of English at Jain University, Bangalore).

That day I promised myself to travel alone to places on every birthday. 12.01am on that day was a surreal experience since I felt a positive energy far from the maddening crowd. Silent conversation with the mountains was a therapeutic experience. Early morning that particular day, I trekked to Solang Nalla village in Manali, and met some interesting people who showed the beauty in simplicity. The weaver women spoke to me about the intricate way of weaving the shawls. The two months old lamb made me feel the joy of life. Holding the lamb was the best birthday gift that one could have wished for on that day. 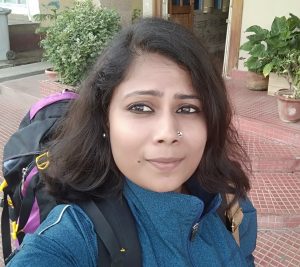 The next two years after that, I visited the sea on my birthday to have a conversation with it. Traveled to Dhanushkodi in the year 2016. Unlike the year before that, this time I was in a bus at 12.01am. A journey towards the abandoned city, Dhanushkodi. Initially, I was a little scared to take up solo tripping. Being brought up in a conventional patriarchal society, I was scared of the new place but I wanted to encounter my own fears. The journey proved to me that the world was still trustworthy.

People were very kind in Rameshwaram. Since I stay in Wilson Garden, Bengaluru, which is pretty close to Shanthinagar it was easy for me to get a bus to Rameshwaram. I reached Rameshwaram at 9 in the morning. After reaching Rameshwaram, I had amazing dosa and vada prepared by street vendors who were so hospitable in serving food. The local auto anna in Rameshwaram was kind and played the role of my guide. With his guidance and support I could visit Dhanushkodi Beach, APJ Abdul Kalam’s House, the magnificent Ramanathaswamy temple, Hanuman Temple, Church of Dhanushkodi and some more places in Rameshwaram. The roaring sea spoke to my soul. After a peaceful conversation with the sea and some unknown people, I boarded my bus to Bangalore with some precious seashells as a birthday gift.

After being drugged by the essence of solitude, I wanted to go to places where I had never been before. I wished to choose the sea in 2017. So, I chose Pondicherry as my destination. A land with diverse cultures, architecture and languages. I chose to live in an affordable youth hostel and was surprised to get a dormitory at the cost of Rs. 250 per day in Auroville village.

Directly from the Auroville bus stop I went to Auroville Beach. Looking at the sunrise in the early morning is a visual treat. Never did I think that I would fall in love with shades of dark orange. After spending a few hours near the beach I reached my room. The youth hostel was surrounded with greenery. I loved the ambience! Dumping my backpack in the room, I took a bus to Mahabalipuram.

Meeting people, the kind and the creepy…

This bus journey made me meet two helpful human beings. The bus was filled with mostly men, I could only find three women. I got a seat in the last row. Since I didn’t look racially similar to the locals, a few men started singing songs and whistling at me. I tried to avoid it but I was confident enough to face the dangers. However, a woman beside me had observed everything and started a conversation with me and got to know that I was traveling alone. Without any gender insensitive advice, she told me how misogynistic and sexist those men were and asked me if I would like to get down with her in the next stop. I could see a humane attitude in her approach and got down even before the Mahabalipuram stop. From there she phoned her husband to request him to get his vehicle and she explained the scenario to her husband. They both dropped me near the Varaha temple. Though that was not their route they took the trouble of helping me. I didn’t even ask their names but they will be remembered for their humane attitude.

Then, I encountered another character who was scary in his attitude and approach. He said he would be my guide. When I said that I could not afford a guide, he said, I could pay as much as I could which made me suspect him. However, he pestered me and just insisted on being my guide and started to share his knowledge. He seemed to be ‘well read’ and ‘informed’. Gradually he started asking personal questions and made me feel uncomfortable. He got to know that I would leave Mahabalipuram on that evening. He insisted on my staying in Mahabalipuram that night (I could understand that he was dangerous). Then, he asked me if I was married and I lied to him that I was. He believed me and I could observe the changes in his behaviour. The man said he had some other work and took his leave from there. I was glad that he left but even today I feel bad that I had to lie (still in a society which is highly patriarchal). It was not like I wasn’t courageous enough to confront him but it was not a safe space and I had to lie. I realised that as a woman and as an unmarried 25 year old woman I had to negotiate and devise my own strategies to survive in the sexist world that cannot see woman beyond their physical self. Though I was a little disturbed it didn’t stop me from enjoying the grand architecture of the city. The best part of this journey was that I got to meet some great artists who were excellent at making chappals, beaded jewellery and sculpting. The interaction with them made me redefine the understanding of our knowledge system.

After enjoying the beauty of that city I took a bus to Auroville, had good food from road side vendors and reached my room. I shared the room with a 20 year old woman from France. She was on a six months vacation to India. She had saved up for this journey. She inspired me immensely. With just a bag with three pairs of clothes she had been traveling India. I was so exhausted that day and I wasn’t in a position to be awake till 12.01. I was in deep sleep at 12.01 in that serene place far away from Bangalore.

Early morning, I woke up and geared up to explore Pondicherry. I was all excited for my day! I treated myself with homely food. The proscenium arches of Basilica of the Sacred Heart of Jesus was peaceful, the colourful streets of French Colonial was altogether a different world. Pondicherry is a world of contrasting images. Alliance Franchise gave me shelter on a sunny day, lemon and mint juice was heavenly at Alliance Franchise canteen. Two beaches (Rock beach and Paradise beach) took me to two diverse worlds. There is something about beaches that has the potential to keep you calm. Few hours near the beach made me feel that the life is beautiful! This time I returned with truck loads of positive and negative experiences and some pebbles that I collected near the beaches.

Traveling on birthdays gave me more hopes to travel on other days too. Now I’m confident to travel with anybody, any group or alone. When I say I like to travel alone most of them have asked me if I was in deep remorse or mad but I wish they could see the empowerment that an Urban Dalit Woman has gained over the years.

Top image via Pexels used for representative purposes only; image within text of author