It’s time we call out sexist jokes that are hurtful or shame other people – being light-hearted and funny does not mean we can say anything!

How often do you come across men cracking jokes at office “Ghar me pati se rotiyan banwati ho? (do you ask your husband to make the rotis?)”

The other day in a mall the parking lot was in a chaos and I overheard a group of young boys saying “zarur koi ladki park kar rahi hogi (it must be a girl parking her car)“ and they all burst into laughter.

After party jokes for married men “Aj to bhabhi aarti utaregi teri (today you’re going to get shouted at by your wife!)”

Then there are those typical husband wife jokes massively circulated through WhatsApp, which slots women as nagging.

There are typical body shaming jokes on fat women, blonde girls, flat chested women, and so on.

I cannot completely deny that even I have laughed at such things with my male friends in the past. But I regret doing it for the past few years since conversation about gender equality and sexual harassment have come up in the open.

Humour is the spice of life. It brightens a gloomy day, it gives us the strength to laugh at our own inadequacies. It gives us the power to speak about the social and political conditions of our country in a light hearted manner. It is an integral part of our personality and can very easily make us more affable. But the biggest challenge of being humorous is the right choice of words, and to avoid hurting the sentiments of any section of the society .

Reinforcing gender stereotypes through such usage of misoginistic language is offensive. Describing women as hysterical, incompetent, or body shaming them is in no way funny. We have to realize the expense at which we are trying to steal a few laughs.

Men, would you find it funny if someone in your office joked about “Ghar me biwi se rotiyan banwate ho? (Do you get your wife to make rotis?)” No one would even laugh at it. If common sense prevails, you would realize that cooking is not a gender role. It’s a life skill which everyone including men should learn. We are proud that these days more women are learning to drive, and it’s our right to drive safely and choose the speed at which we want to drive. Cracking a joke at our speed is not even remotely funny.

Most often I have realized that the person cracking such jokes doesn’t realize that these could be offensive. We have been raised and socialized to accept this type of behaviour as ‘normal’. Its about time we stop normalizing such sexist humour.

Whenever you hear such jokes just ask “Why do you say that?” People would immediately understand that what they said was not funny.

Let’s give a cold reaction to such lame jokes. There is nothing worse than a joke losing its steam.

Be ready to hear comments like “You don’t have a sense of humour!” Be ready with a comeback for all such people. Just realize that sexism is no longer a laughing matter. Be it for a woman or a man. Every time you refuse to laugh, it gets a little easier!

Hey people I am sure there can be humour without hinting at body shaming, gender inequality and vulgarity. Let’s realize that sexism is far from being natural, and we need to fight it out. 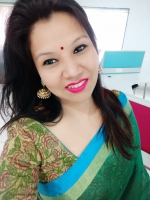 The Wild, Unbridled Laughter Of Women, For Which They Are Usually Shamed