When Sita, Draupadi, And 3 Other Women From The Epics Tell Their Own Stories

Our epics are undoubtedly written from the POV of the great men in it, and are stories told by the victors. What if the women in there tell these stories instead?

Our epics are undoubtedly written from the POV of the great men in it, and are stories told by the victors. What if the women in there tell these stories instead?

The Forest of Enchantments

Chitra Banerjee Divakarunis latest book The Forest of Enchantments begins with Valmiki showing Sita his Ramayan. As she reads it, she realizes that for all its epic quality and literary merit, it is a tale about Ram alone. His heroism, his anguish, the injustices done to him and his victories. Sita exists in the Ramayana only as a catalyst to the events the propel Ram to greatness. And so, she decides to tell her own story. She writes of her struggles, her anguish, her doubts and her rage. This is a Sita we have never heard before and she stuns you with her magnificence.

But the Forest of Enchantments is not just about Sita but also about the many other women who cross her path. It’s about the long suffering Kaushalya, the valiant but insecure Kaikayee, the effervescent and hopeful Urmila, the wise and wronged Ahalya, the anguished and kind Sarama, the stoic yet eternally tragic Mandodari, and even the raw, bewildered Shurpanakha. Sita shows us their wounds, their battles and their heroism.

The Forest of Enchantments is latest in a series of mythological retellings where the women take centerstage. Banerjee-Divakaruni herself has done it before in her celebrated The Palace of Illusions, Draupadi’s retelling of the Mahabharata.

Draupadi, like Sita, is always viewed as the wife of the warriors and a catalyst of war, but here she comes into her own. The author resists the temptation to paint her as a blameless paragon or a perpetually suffering victim. Here, Draupadi wears her terrible humiliation like a war wound, refusing to forget or let the men forget. We sense her passion and her rage, her wisdom and her frustration.

Moving westwards, Margaret Atwood’s brilliant The Penelopiad places Penelope, Odysseus’ wife front and center. To call this a retelling of the Iliad would be inaccurate since Penelope, unlike Sita or Draupadi is neither directly involved in the war nor a spectator to it.

While the war rages on in faraway Troy and her husband is out there being heroic, Penelope has to get on with business of living. She raises her son, defends her stony little kingdom and fights off a clawing bunch of suitors without any glory coming her way. And in the midst of her story there is the macabre chorus of the hanging girls that will haunt you long after.

Circe by Madeline Miller tells us the story of the much-maligned sorceress who is supposed to have enchanted Odysseus on his way back home and turned his men into swine. It could be argued (and has been argued) that Miller imbues Circe with contemporary moral values, diminishing her power and majesty to a great extent. But she does paint a vivid picture of the freedom a woman must feel when she no longer seeks acceptance or validation from the world.

The Silence of the Girls

Finally, there is The Silence of the Girls by Pat Barker.

An unapologetically feminist retelling of Homer’s Iliad, we see the great war through the eyes of Briseis, Achilles’ concubine. She speaks to us of the horrible brutality and senselessness of war and its tremendous cost to women on both sides.

Often feminist literature is unfairly criticized for viewing its male characters with a uniformly unkind gaze. But Barker also captures how terrible it is for the men trapped in this heightened masculinity. Patroclus, and at times even Achilles struggles against this.

This is not a novel for the faint of heart. It is unrelenting in its horror. But it deserves to be read for the startling clarity with which Barker draws these well-known characters.

There are many who suggest that these mythological retellings are an attempt to redraw antiquity with a modern toolkit, to impose modern day feminism on ancient texts. After all, the spoils of writing history traditionally belong to the victor. But it’s important that we hear the voices that have long been silenced, the casualties of every epic war, be it modern or mythological. Its important the women, even fictional ones, take back their narrative from the men and tell their own stories. 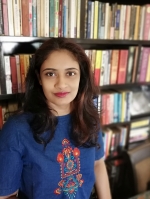