My family is a good example of how empowering women can lead to subsequent generations breaking the glass ceiling – let’s see how that works, shall we?

I come from a family where healthy competition among girl children is encouraged… not competing on how well they cook, but on how well are they educated and how good a career they have! Having lived in such a household, I sometimes find it shocking to interact with people who believe when a woman takes up a job, she does that only to support her husband! People find it alien to use woman, career and passion in the same sentence!

Being the positive person that I am, it is unlike me to start out on such a negative note. This, however, is necessary to set the context before I begin to count my blessings.

Moving on to ‘counting my blessings part’, I want to share some stories that happened in my family in India, in the mid-20th century. And how that has helped to shape me!

My great grandfather was a freedom fighter (fought against colonial rule in India) and hence was considered to be a radical. He did not do things in tune with society’s norms. In fact, in certain aspects, he was a pioneer. He supported his daughter’s dreams. My grand aunt (my mom’s paternal aunt to be precise) was the first female to take up a job in my family. It was early 1950s in India and it was against all social barriers, that she did so. She was a “Hindi Teacher” at a school.

Moving on to the subsequent generation, from great grandparents to grandparents. Both my maternal and paternal families had a mantra “Educating boys and girls equally; encouraging girls to pursue a career”. And most importantly, it was not out of compulsion or economic need that the women folk of my family took up a job.

In 1950s and 60s, in my country, it was a social taboo for a family to spend money on a girl’s education. Women, even if educated were encouraged to take up an arts/home science stream as against science/engineering/medicine. It was often considered customary to get a daughter married off at an age of 18.

My grandparents had a different outlook, for them it was their child, be it male or female! My mom did her post-graduate degree (Science degree); my dad’s elder sister, my aunt, went on to become a doctor; Yet another aunt, a professor at a renowned college.

These women are pioneers too, in their own way, especially when most of their peers were being married off in their late teens.

This education and encouragement enabled the women of my family to reach great heights in their careers ! My mom is now a deputy general manager in a major telecommunications company; my aunt holds a doctorate and another aunt continues to serve as a doctor past her retirement age.

I can’t emphasise enough, how proud I am about them!

These traditions continue in my generation too. Most of the young ladies of my family went on to do/ are doing their masters/PhD. And that includes me.

Not so long ago, one of my female friends opened up to me about her life. She said, “The key difference between us is that I come from a chauvinist family and you don’t.” Her poignant words, still lingering in my mind, seems very true as I look around, even today! I have heard a lot of bragging in some moms-and-aunts circles about how well their college-going daughters can already cook, but with their sons, their bragging ends by citing his accomplishments at university or how good a tennis player he has become.

As I look back at my life, my parents have consciously steered away from  grooming-my-daughter-to-be-a-good-home-maker attitude. So was my aunt with my cousins.

They are university rank holders… winning scholarships and presenting papers were their thing!

A lot gets decided about your life, and your future by what you experience as a child. If parents instill feelings of limitations: ceilings to what their daughters can do, that is likely to create a nagging sensation with perpetual self-doubt in their minds. I was immensely fortunate not to have to worry about any of that.

My self-esteem is rock solid, so is my confidence. My family broke the glass ceiling for me, empowered me! An invaluable gift from my family! 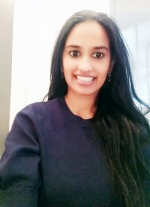 The Glass Ceiling Is Not A Myth. But I Want To See You On The Other Side

It’s Never Too Early For You To Mentor Other Women: Start Today!