Women from Barabazar block of West Bengal, enabled by the women-led Sabuj Sathi Nari Sakthi Sangha, are creating waves by challenging patriarchal norms, dressed in shirts and trousers and working as masons.

Despite seventy-one years of our independence, Indian women are still struggling to claim their legitimate space in Indian society.

Development for women clubbed with their ‘families’

All the development projects that independent India has witnessed have largely centered around the goals of eradicating poverty and hunger by enhancing production, or eradicating illiteracy by expanding the infrastructure of mainstream education. These projects and their goals have made use of women’s participation without any real freedom.

The gaps in gendered empowerment have largely been addressed through the mere integration of women in the development process as the recipients, but very less attention was paid in formulating the gender-specific agenda by women and on the process of inclusion. Women have been considered one and the same as the family in development discourses, with the tacit understanding that increasing economic production would benefit families, which then would automatically trickle down to women and children as well.

However, this story has taken a different route altogether. India ranks 130 in the Gender Development Index out of 189 countries in spite of maintaining the average 6.1% of economic growth rate over last sixty-seven years. Indian policymakers have largely overlooked the deeply stratified and gendered structure of a society where gendered role divisions and discourses around women’s right stem from a deep-seated patriarchal family set up and the Victorian idea of sexuality.

This reduces women’s bodies to both the resource and the site for economic production and the reproductive works done by her is taken for granted.

Focus only on better toilets for women

‘Mission Nirmal Bangla” – is one of the flagship programs of the Government with envisioned impact on women, girl and child development too suffers from the legacy mentioned above. The objective is articulated as –

The Mission is named as Mission Nirmal Bangla and under the mission the Government of West Bengal endeavours to achieve the larger objective of reduction in child mortality and morbidity, overall mortality and morbidity by reducing chances of waterborne and faecal borne diseases due to prevalence of open defecation; reducing the loss of active workdays due to prevalence of diarrheal diseases among the wage seekers; reduce the drop out of children, especially girls due to lack of appropriate toilet facilities in schools; improve overall cleanliness in the villages thereby contributing to improved environmental conditions. Thus the overall goal of the Mission will be to bring about positive changes in the physical quality of life in the villages by promoting cleanliness, hygiene and elimination open defecation.

The ambitious aim of achieving the healthy productive population, especially girls, women, and children by providing the large network of mainstream infrastructure has the agenda of community-based implementation. A detailed examination of the community shows that the only the integration of women through Self Help Groups is in propagating the mission of zero open defecation.

The program has no interest explicitly in challenging any of the gender stereotypes, sealed by the patriarchal norms of the rural society, which is essential for reducing the gaps in gender development work.

A rupture in the process was required and this rupture was quite successfully brought in by the women of the Sabuj Sathi Nari Sakthi Sangha – a woman led member based federation- in Barabazar Block in Purulia in West Bengal.

“All the twenty hands were raised up when I asked whether they were willing to learn masonry skills for making the latrine under the Mission Nirmal Bangla scheme, and challenging the long observed social norm that women are only allowed to assist the mason and can never be the mason.’’ – Chintamoni Kumar (Block coordinator, MNB) The Barbazar development block had assigned the building of household latrines to private contractors and women served only as the mouthpiece for spreading awareness about cleanliness like any other place. Women were completely kept outside the realm of the better paid work of the latrine construction, as this is considered to be in the mail domain. Also, the latrines built by contractors were smaller than the prescribed size, and were mostly unusable. A lack of masonry skills in the construction also contributed to these not been a well-finished job. As a result these latrines were not usable.

Getting women to become the masons

The Administration was was frantically looking for a workable solution and there was a lot of anger among the women was fuming over the poor implementation of the latrines.

“I was desperately thinking for doing something unprecedented. I assumed it to be an opportunity to spread the message against the gendered role of the male mason. I proposed that the women associated with my federation are willing to learn the masonry skills and construct quality latrines” – Chintamoni Kumar (Block coordinator, MNB)

Initially, the district administration didn’t agree to impart training to these women, and denounced the proposal. Chintamoni Kumar knew from her experience of long association with the women’s organization that things were not going to be easy. After days and weeks of continuous and tiresome negotiations, the district administration agreed to have a meeting with the aspiring women.

This was now the chance for the women to gain credibility. All twenty of the women reached the venue half an hour before the scheduled time on the day of the training. In clear and loud voices resounding with confidence, they asserted that they were capable and wanted to build proper, usable latrines for other women like them, with whatever money was allocated. 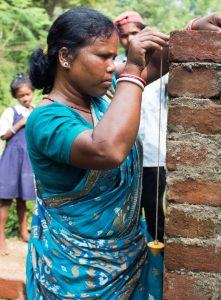 After five days of long rigorous training in Purulia by Ramakrishna Mission, they were back in the village and the actual test started. For the convenience of the work, many of them preferred to put on the trousers and shirts. Further, they were to take up a role of mason which had so far only assumed by men, and that too in villages outside their own. This massive change in their identity enthused them to give their best.

PRADAN, a national level NGO has been working with these women and their federation for last fifteen years, on livelihood, education, and gender empowerment. All these twenty women were directly involved in a PRADAN aided Adult Functional Literacy program, and were active participants of the theatre groups promoted by PRADAN. While doing this theatre performance these women had already used male attires as a prop, and were quite comfortable in using those.

Resistance, and shaming by the village men

However, the men of the village found this change very difficult to digest.

Women holding a trowel is analogically very close to women ploughing in the field, which is not traditionally accepted. On one occasion, even a government officer abused them and stopped them from working. Despite all this, they took up the challenge, and nothing could make a dent in their determination. 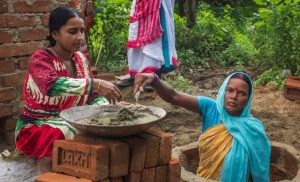 Together these women have built more than 100 latrines, and all of these are very well built. The protests also gradually died down, and their men, especially, had begun to make peace with the new reality.

Breaking down patriarchal norms, 1 brick at a time

The whole process, on one hand, resulted in very good quality latrines, and on the other hand and more importantly, this massive identity change had hit the existing patriarchy so hard that it started negotiating with these women. The resistance had transformed into an association.

“I earn by myself and don’t ask for money from my husband anymore. Whatever I spend, I spend for me. I bought the sari for me and the rest of the money I am saving in my name in the bank.’‘ – Parvati Murmu.
“My husband is also a mason. Now if in the first half he goes to work, I do the chores and in the second half he does the chores and I go to do the mason work and vice versa’’– Lalmoni Soren. The women attribute about 70-80% of this transformation to the process they have gone through since they formed the Self Help Group with the help of PRADAN, and 20% they believe is the result of their own potential. The PRADAN aided adult functional literacy center had helped to come along a great extent. Almost ten of these woman masons learned measurements in the functional literacy centers.

Apart from the technical knowhow, what they value most is their acquired ability to articulate and argue, as well as the ability to understand the society around them. The training on gender discrimination and subsequent discussions in the centers had changed their perception, and the participation in theatre has boosted their confidence to the level that, in their words, – “I don’t feel anymore that I have nothing irrespective of the amount of money I have. I always feel now that I have everything. I feel the ability, power within myself’’ – Sikha Mahato.

They had just embarked on the journey with the collective vision of being empowered. They now want to make more women from their social groups to be like them. Their stories offer a great deal to learn from for the development practitioners. 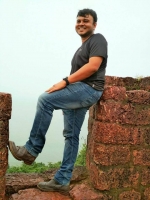 Sourangshu is a development professional working at grassroots with women for last eleven years. He

India Gets Elected To UN Commission On Status Of Women 2021-2025. Will Indian Women Benefit?

If We’re Having A Women’s Day, Then Our Rural Sisters Deserve To Celebrate Too!

6 Ways The Lives Of Indian Women Has Changed For Better: As Found By National Family Health Survey