Are Parents Only A Son’s (And By Extension, The DIL’s) Responsibility?

Despite what the law says, society still believes that parents are only a son's responsibility - and this buck passes to the daughters in law. When will we change this mindset?

Despite what the law says, society still believes that parents are only a son’s responsibility – and this buck passes to the daughters in law. When will we change this mindset?

I live abroad. Of late I have seen quite a few instances where guys have asked their wives to stay back at their home in India to take care of their parents.

Recently my colleague was mentioning he has asked his wife to stay back at his home as his parents will be bored without grandchildren! They are old and there’s noone to take care of them. She was working here and after having second kid he told her to quit job and go to India.

Another instance where my husband’s friend told his wife and kids to stay back in his house as his mom was alone there after his dad passed away.

The irony in both these situations is that in one case they have a daughter who is living just 10kms away from the parents’ house and another one has two sisters living in India. But even then in both these cases it’s their wives who are taking care of their parents.

No, don’t get me wrong. I am not against in taking care of in laws. The point is, when you have your other kids (daughters) living nearby, why is it expected that it’s a son’s responsibility alone to look after parents? I just thought about those ladies who are staying apart from their husbands and looking after their kids alone. Won’t they wish to stay together with their husbands? Wouldn’t they want to go to their home and spend some time with their parents as well? What if their parents have only daughters, or what if they are a single child like me for their parents? As girls don’t we have any responsibility towards our parents?

I asked my colleague – you have your sister living so close by to your parents’ home so won’t she look after your parents when you are not at home? To which he replied, that in their place society will talk about them if she takes up her parents’ responsibility. It’s generally only the son who takes care of parents.

I was shocked to hear his reply. It’s we who make up the society. Boys and girls are educated by their parents and married off once the time comes. But still doesn’t a girl have any responsibility towards her parents? We make up the society. So unless we change ourselves how can we expect the society to change?

I always believe in the phrase change begins at home. Unless we show ourselves as an example to our kids how will they learn anything different? We sure have a long way to go to break all these patriarchal norms. Will it change any day? Well, only time can say that, because there are still people around us in our generation who still believe that only sons should take the onus of parents.

I would love to hear your thoughts on this and how we can change these norms for good.

Image is a still from the movie Baghban

Software Engineer by profession, blogger by passion, an avid reader of books and blogs. Someone who recently started exploring her skills as a blogger :) read more... 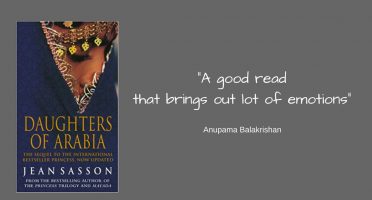 Daughters of Arabia By Jean Sasson