Indian girls are often told “ladkiyan raat ko bahar nahi rehti”. Here’s a woman, however, who triumphed over this conditioned fear of the dark because she was empowered to do it!

As a young child, I was always too scared of the dark. Every time the electricity went off, my mind would start imagining creepy creatures behind my back, ready to attack me for something I didn’t know really. I remember climbing the stairs at high speed so that these imaginary creatures won’t be able to grab me, continuously requesting God to save me! I would take a breather only when I found someone known or I reached a place where there was light.

But that was childhood and the usual fears of the unknown, I guess. However, with age I realized that for a girl, that fear of dark never really goes away.

During college days, I had a hard time crossing that not so well lit lane leading to the bus stand especially after one disturbing incident when my handbag was snatched by someone on a bike. My mother was even more paranoid about me being out after dark; night-outs were totally taboo, no matter what. School and college outstation trips were never allowed because – “ladkiyan raat ko bahar nahi rehti”! Even any prospects of studies outside my hometown were put down for the same reason.

Maybe this sounds very unbelievable for today’s generation and maybe it was not universal even in those times, but lot of us did face these restrictions. And ironically, all the fun stuff happens after dark – college fests, music concerts, new year parties, office parties, friends’ weddings – almost everything which makes you feel alive is scheduled for after dark hours.

Finally, by the end of my post-graduation and later in my professional life, I decided to live my life beyond this fear of dark. I did attend college events, took outstation trips, went to office parties, enjoyed friends’ weddings, had night-overs at friends’ places, and other such lively stuff (but nothing dangerous or unsafe ever) because the love of life could not be dampened by this fear of dark anymore.

My mom never ‘approved’ of these ‘adventures’ of mine! Even today, my much-required official outstation trips are not considered ‘too nice’ by her because she is still of the opinion that “ladkiyan raat ko bahar nahi rehti”.

And just yesterday, I met the real super woman of the dark, Mamta! After an over-delayed flight from Mumbai, the office cab that picked me up from the airport was assigned a female security guard.

At first, I was impressed by this additional safety measure being considered by my office. And then, I started thinking about her job profile and the very nature of the job that spelled UNSAFE. Imagine, she had to go around the ‘not-so-safe’ Delhi NCR roads, in a car, with a driver, throughout the night, to pick up and drop female executives of the company to ensure that their commute is safe.

I am sure, the management and the agency would have taken due care of her safety as well but as an individual, I mean as a female individual, how did she accept this job in the first place? Was she never afraid of the dark? Was her mother always so brave to let her venture out in the city after dark? Was she never told that “ladkiyan raat ko bahar nahi rehti”?….I couldn’t stop wondering.

While getting off at my place, I told her that she was doing a great job, no denying that it was a difficult job and I was truly impressed by her, and it showed that she was brave and independent. I couldn’t stop myself from asking her “how does your family feel about this job of yours?”

She said, “I am the eldest in the family, I need to take care of them and that makes me take my own decisions”.

Wow! Kudos! Women empowerment in full display in front of me in the form of this unassuming personal night bodyguard of mine, Mamta.

I was thinking about sharing this with my mom the next morning while Mamta and the car zoomed off and faded in the dark, and I thought to myself, she was the real super woman, the lady Shehanshah, who has overcome the fear of the dark in a big way. I hope she stays safe always and inspires more and more women at work place and otherwise.

Author’s note: I only intend to talk about independence here, independence to move around without fear at any hour of the day and night, independence to take our own decisions without being restricted by the limits set for us by the society or its norms. I am in no way suggesting or encouraging any unsafe venturing out or dangerous activities at night by anyone. Safety is of utmost importance, always. 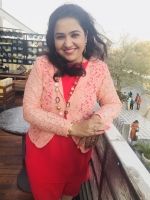 I am a mother, wife, daughter, sister, friend, General Manager in a Company and also

“Haters Gonna Hate, You Do YOU!”: What Mom Told Me About My ‘Brown’-ing Glory

It’s Won The Oscar; Now Let’s Make Sure Our Girls Are Never Shamed For Periods