Most people have been very supportive of #IPLWomen, yet the turnout at Wankhade stadium for the first match was quite low. We need to know the inherent reasons behind the bias against Women’s Cricket.

The women’s exhibition T20 match was played on Tuesday, 22nd May, between the IPL Supernovas and the IPL Trailblazers. The Supernovas won after an exciting game of cricket but the victory was overshadowed by the fact that they had a fairly small audience.

A lot of fans took to Twitter to express their dissatisfaction, some going so far as to suggest that BCCI wanted this to fail just so that they could have an excuse not to stage women’s cricket in the future. There is absolutely no doubt that the poor marketing, bad timing and a really late announcement of the match played a huge role in the low turnout. 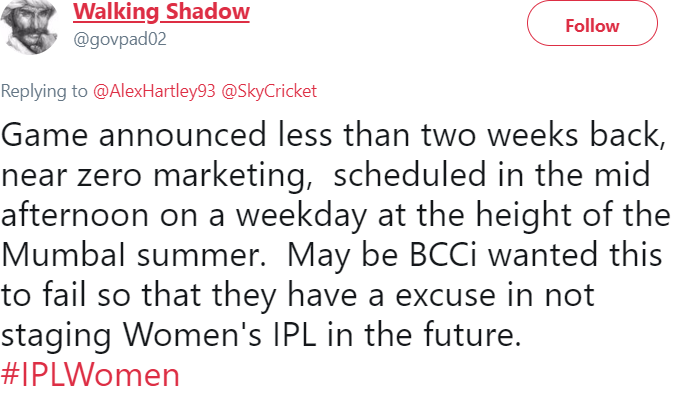 But there is more to it…

The match was scheduled at 2 PM on a weekday in the scorching heat of Mumbai. But, that was not the only reason behind the empty stands. Quite a few of the cricket fans of Mumbai decided to save their energy for the match scheduled at 7 PM on the same day – the match that would decide who would get directly into the finals of Men’s IPL (played between the Chennai Super Kings and the SunRisers Hyderabad).

And that brings us to my next point, that is, the BCCI is not solely at fault. It’s more of a vicious cycle – they don’t give as much importance to women’s cricket as they do to men’s cricket because they know that many people prefer sports played by men. Consequently, people continue to prefer men’s sports because women’s sports aren’t treated equally by those in charge of marketing sports.

Those in charge of organizing and marketing sell what sells and we cannot depend only on them to make women’s cricket more popular. Majority of people seem to think that women playing team sports just aren’t as thrilling and interesting as men. This does not apply specifically to cricket but covers that as well. For instance, to quote a person called Field Zhukov (who commented on an article published by The Atlantic, that talked about the different treatment of male and female soccer players), “Women’s sports that are identical to men’s sports—soccer and basketball, for example—will never be popular, because men are faster, stronger and more athletic. On the other hand, sports that highlight the different strengths of female athletes—tennis, gymnastics, ice skating—are popular. None of those are team sports, so there may be something there.”

This is exactly the sort of problematic attitude that needs to be addressed. The issue is far bigger than cricket and seems to come from the very basic stereotype that women are always physically weaker than men. We need to change everyone’s perceptions. It can start one step at a time, because this stereotype is widespread.

The BCCI can definitely help make women’s cricket more popular (and they should be held accountable for not doing their best to do so). After all, Kabaddi was never a popular sport to watch on television but it has a fairly big viewership now because of the way it was promoted. But, I think the problem runs much deeper than that. Kabaddi might have never been popular before but people did not have any specific bias against it. But this is not the same with women in many sports. Many people obviously have a preconceived notion that women playing certain sports are not as cool as men playing them. We have to work towards changing their attitudes.

Let’s keep trying to do that until we succeed in establishing that women are truly equal to men. Kudos to all the sportswomen out there, playing with passion despite all the sexism they face.