In the past, when women tried to express their opinions in public, they were shut down with insults. Now, history is repeating itself online. But, women are calling out to online abuse through the hashtag #ToxicTwitter.

Just a little while before I started writing this article, I was surfing Instagram when I came across a woman’s comment stating that she didn’t shave her legs because she didn’t like it and that feminism was about the choice to do anything with your body without being judged. A guy responded to her, by referring to her as a ‘chimpanzee’ and implied that no guy would find her attractive.

Any woman who is on social media is more likely than not, to have faced some sort of nuisance (or much worse) online simply because of her gender.

For instance, recently, journalist Rana Ayyub – who is strongly against Hindutva forces – went through a horrid experience when fake tweets with morphed images were posted in order to defame her. This is not the first or last time this has happened to a woman who is not afraid to voice her views. People on the internet are often brought together specifically for the purpose of attacking a woman with a mind of her own.

The fact that such incidents are not uncommon is what led to Amnesty International India launching a campaign to promote online safety for women. They are focussing specifically on social media platforms like Twitter and women have begun using the hashtag #ToxicTwitter to call out and discuss sexist online abuse.

Ironically, the hashtag meant to criticise online abuse has in many cases resulted in more online abuse. For example, when historian Audrey Truschke tweeted about an article on online abuse of Indian women in one of her tweets along with the hashtag #ToxicTwitter, another user Shiv tweeted a reply saying, “Mind your own fucING business bitch Don’t try to enter every topic out there, I get your point that you get paid by political parties and all that bulls*it for digging out topics, that are not even there but please STOP #plzstop #Havedignity.” 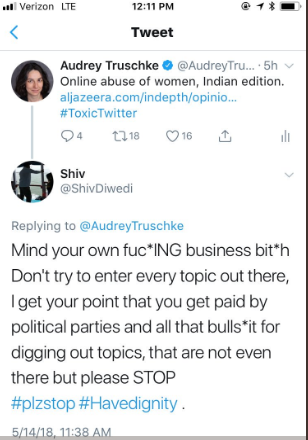 Women have braved the unfair criticism though – just like they did in the case of the #metoo campaign, another protest against abuse – to continue in their fight against online sexists and trolls. We women have to be each other’s knights in shining armour and that’s what some of us have already started to do, by thinking of solutions ourselves since social platforms do not seem to care very much.

One solution that was suggested is to recruit volunteers who will track abuse against women. This will help us save ourselves because trolls and cyberbullies find it easy to target people who do not have a support system. They attempt to isolate them, causing further distress to the victim. The current patriarchal society helps a lot with that because it already loves targeting women. Forming a team of people who make sure women are safe online will eliminate the problem of having no one to go to. If the haters can stick together, so can we!

Time and again, women have proved that they can succeed if they try hard enough. Society has always tried to push us out of the public sphere and we have always tried to find a way in. And we have usually been victorious; we managed to get voting rights even if the fight resulted in the death of some women. We have done it before and we can do it again. We will not be pushed out and silenced. We will continue to say what we want, unapologetically.

Virtual Rape Threats Are Par For The Course, All Because A Woman Deleted This Man’s Comment!

Does The Responsibility Of Parents Finish Once Their Daughter Is ‘Married Off’?