For anyone else watching Sneha, it would seem so normal, a girl going out for the night for some late-night party maybe, or maybe she was returning home after a party.

Our Muse of the Month series this year focus on stories that pass the Bechdel test, and are written on inspiration from a new prompt every month. This month, the prompt was “With A Leap Of Faith”, and the story should pass the Bechdel Test, that is, it should have at least two well crafted, named women characters (we differ here slightly from the classic Bechdel test, in that we require these characters to be named),

The fourth winner of our May 2018 Muse of the Month contest is Shakhi.

Ruby watched Sneha with interest as she sipped her drink. “So, do you like it?”

“Yup, tastes good. Have never tried this combination before.”

“This one got too sweet. For your second peg, I will lessen the juice, the taste will be more balanced.”

“From where did you learn how to mix drinks?”

“Being on your own teaches you a lot sweetheart.”

They both raised their glass and fell into silence.

While watching the lights in front of them, Sneha felt strangely comfortable. How rare it is to find a friend who is not judgemental and with whom you can speak any crap you want or not speak at all.

Suddenly Ruby said, “These humans who live in these cardboard ke ghar (houses made of cardboard) seem so proud and invincible, don’t they?”

Sneha looked at her and burst out laughing, “I didn’t know we were playing god today. We are the same as them, you know that don’t you? Except we are sitting in the 20th floor balcony of your “rented” flat.” Sneha made air quotes at the word rented.

“Yes, but still, it feels good to imagine na that we are above all that ego, jealousies, tensions, and fear pestering those mere mortals.”

“Hmmm, true”, was all that Sneha replied.

Ruby took a long sip from her glass and asked, “So, what are you planning to do?”

“And you know what I feel, I don’t think am ready yet.” Although Sneha herself felt that she would never be any more ready than this.

“What happened to you was bad Sneha, really bad, but that should not change the way you live. Life does not and should not end for YOU.”

“Every time I think of going out, I can feel those hands grabbing me, touching me, I can’t Ruby. I don’t think I can.”

“How long do you want to stay in this house? You want to make it your sanctuary, do so. But you have to go down to that cardboard ki duniya and come back here. That is what a sanctuary is. I won’t let you just stay in a cocoon, be sure of that.”

Ruby fell silent and kept sipping her drink. Sneha was watching the lights. She had been molested by a cab driver while returning from her office late at night. Ruby knew ‘molested’ was an understatement; she would have been raped if some people out for a smoke had not heard her cries and saved her. Since then Sneha had refused to go out of her home.

Sneha sipped her drink slowly and watched the lights. Cardboard ki duniya, how perfect it sounded. She was the god, and she could look at those puny people. Maybe she could pick that one up and put him on a different road. Will he be surprised?

She smiled imagining how that man running on the road would feel if he suddenly found himself up in the air and down on a different road at a moment’s notice.

And then she sighed. A god! A god afraid of going out in the world! She knew she had to go out, and soon, the world cardboard or not won’t wait for her. She had to go out. But when?

She had to decide and decide soon. Her office had been tolerant enough, but for how long? She had been feeling that it was time to take a decision. Why was it always so difficult to take the first step; the rest she knew would come easy, she just had to have the courage to take first step.

Ruby looked at Sneha and took her bike keys in hand, “So shall we?”

“What? Now?” Sneha was aghast.

“Then there is no vehicle like a cab Ruby.”

“What?” It was Ruby’s turn to look surprised.

Sneha gave a small smile and took out her mobile and started the cab booking app.

“Someday I will have to go alone, why not today? I am a god remember, I can’t let these puny beings harm me.”

“No, am not Ruby, and I don’t think I will ever be. But like you said, that should not stop me from living, right?”

“How about a leap of faith?”

“In me.” Sneha picked her mobile, took out her purse from the cabinet and went out the door.

Ruby smiled and kept sipping her drink and watching the lights. She looked down and saw how small Sneha looked getting into the cab. For anyone else watching Sneha, it would seem so normal, a girl going out for the night for some late-night party maybe, or maybe she was returning home after a party.

But Ruby knew how difficult it was for Sneha, what a big leap of faith Sneha had taken. To go out of the house, at 2 am at night, alone, in a cab, she didn’t know if she could have done it. The cab slowly went out of her view.

Sneha smiled sitting in the cab. She was the god and the mortal world couldn’t touch her. The cab driver turned to ask some direction, Sneha replied and then patted her bag. Yes, she had not forgotten the can of mace spray she had ordered online. The god was prepared to fight back now!

Shakhi wins a Rs 250 Amazon voucher, as well as a chance to be picked one among the top winners at the end of 2018. Congratulations! 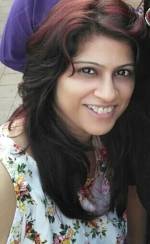