Hollywood Or Bollywood, Women Get Less Representation In Movies, But Men Still Grumble

Women are underrepresented in movies, and speak a lot less than men, as a study shows. Why, then, are men so agitated by this fact?

I am a member of a film aficionados’ group on Facebook. A concerned member posted about the ‘number of words’ spoken by men and women in some award-winning Hollywood films. The chart looked like this. 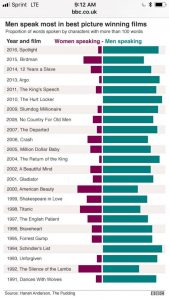 It is sourced from BBC so my guess is it should be a well-researched chart if we go by the brand BBC. It is very evident that the female representation in many award-winning films is diminutive and it should not come as a surprise for a lot of us who have seen such trends almost in every strata of society.

What was especially worth a mention, and a trigger for this note of mine was that on that thread men were the most offended lot. Many lashed out with memes and pictures and statistics and data taken from shoddy websites and articles about how “Women in real lives speak more than men” and how “Women don’t understand too much about wars”. Many also made sure to point out that a few of these films were actually made by women, so ‘hey such ironies’.

Within a few comments it was amply clear that the thread was going to be hijacked by men making it all about themselves and their oppression, completely forgetting the core issue at hand – that of representation and imbalance.

This again shouldn’t surprise many of us who have grown accustomed to offended men hijacking spaces built for women and LGBTQ+ and suddenly bringing up points like ‘Men also get oppressed’ etc. Where had they been all this while before the feminist movement started, no one knows! Maybe exploiting their position of power but of course let’s not forget #NotAllMen (because massaging egos comes before raising issues, right?)!

So, coming back to the point, I observe through such posts and comments about how many men perceive the feminist movement as an inversion of power structures rather than ‘equality’. It is as if their wildest imagination runs up to either male power or female power. It is as if their most knowledgeable conclusions about the movement is either patriarchy or matriarchy. And while thinking so, they unknowingly accept that the power structure has been unjust all these centuries. And now they do not want an inverted power structure because they very well know that they giving an exploitative privileged position that they come from to someone else is, of course, scary. And hence, they forget everything about ‘Equality’.

It is simple. Don’t complicate it y’all. We feminists want to destroy the power structure and not invert it. Like Mary Wollstonecraft Shelley says, “I do not wish them [women] to have power over men; but over themselves.”

The only power we propagate is the power over self. There is no other power structure. There is only equality and human rights.

Header image has screenshots from the movies Coco and Padman

When Four Feminists Meet And Discuss What Is Wrong With Bollywood, This Happens!