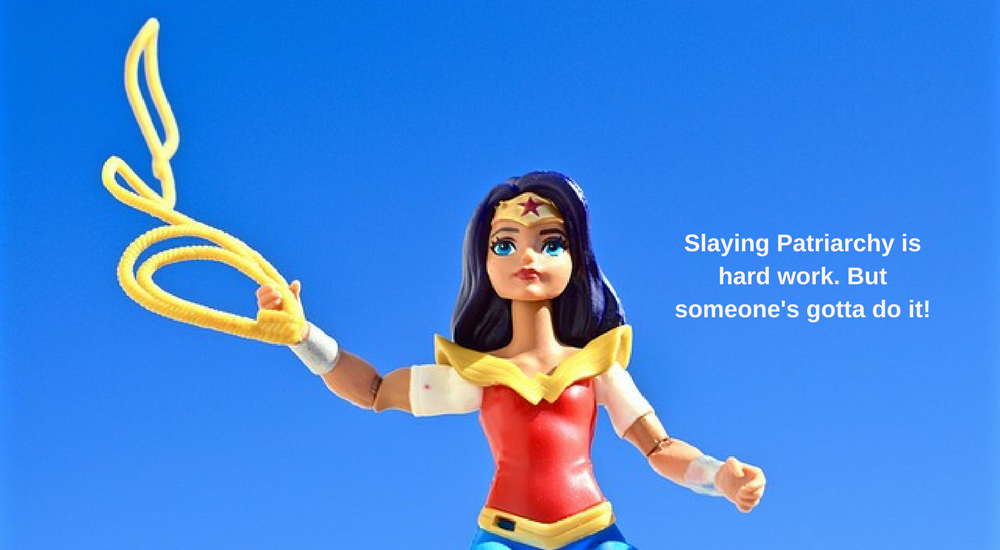 The Day After Women’s Day – Everyday Sexism Is Far From Going Away!

Now that Women’s Day is over, the discounts have lapsed, the cheery Whatsapp forwards have become obsolete, and the roses have wilted, real life (read, sexism and stereotyping that women are subjected to) has resumed for women.

An image similar to the one below was sent to me. I was appalled at the disguised sexism that doesn’t come across immediately. A quick Google search threw up many similar misogynistic images, identical to the one I had received. So Feminism is about women wanting to do things men can do, right?

Feminism is women aping men and hence losing our uniqueness, you think?

Because of Feminism, women are forgetting their real calling and their real purpose in life?

If you think Gender Roles exist for a reason and that women should remember that they were created to fulfil certain roles, then it’s time to understand how these roles came to exist.

Who created those Gender roles? Who decided that women have a specific, single purpose of existence?

I shall let you figure out the answers to those questions yourself. I sure hope to God you come up with the right answer. (And just in case, your answer is ‘God’, please do tell me how you know that. Did God come to you and tell you that himself?)

The above image also talks of women losing their uniqueness. What uniqueness is that? Are we unicorns with a horn jutting out of our heads that’s increasingly disappearing the more we clamour for equal pay and equal rights? Or by ‘losing our uniqueness’ does it mean that we are becoming extinct because we are speaking out more often against sexism and patriarchy?

If so, is there a cage we can be put in and chained to ensure that we remain in existence? Oh wait, I forgot we are already in a cage – it’s called a ‘kitchen’, the chains being stereotypical mindsets, tradition, and culture.

Okay, so it seems we were created to do things a man cannot do?

Let’s first discuss what it is that a man cannot do. Can a man walk, run, eat, laugh, speak? Draw? Cook? Sing? Rear a child? Dance? Decorate a home? He can do all of these, of course, so these aren’t the things a woman is uniquely capable of. Aah, now I get it – a man can’t give birth to a child. That’s right! By that conclusion, it’s evident that a woman is fit to only give birth to kids and no more, isn’t it?

If, on the other hand, your argument is that ‘Women weren’t created to do what men can’t do, but to teach men how to do it better’ then let me stop you right there. That’s not feminism either, that’s arrogance.

It isn’t even infuriating anymore. It’s pitiable! It’s the inaccurate assumption of what feminism is that’s doing more harm than good. As a close friend correctly said, ‘misplaced feminism’.  Feminism, at its core, is about giving women the freedom to think, act, choose, and as a result, live their lives the way they want to. Not dictating, or even telling them what’s right or wrong. Not deciding their level of knowledge and giving out unsolicited advice. And no, it’s also not ‘allowing’ women to follow their dreams, or expecting them to work (or in some cases, stay at home) but instead asking them their preference and respecting their decision.

Forget sexism and misogyny, most arguments defending tradition and culture are glaring examples of ignorance and denial!

So I now ask you the big question. Why is it that women are expected to pick up after a man? What is it that he can’t do? Why is it that he gets to play master and the woman a silent slave? Who decided that men are going to be such wimps that they’d leave all the tough jobs to women to handle on their own? Isn’t their manhood being challenged now, especially since we’ve established that men are dispensable?

If you’re a true feminist, you should have a problem with that last sentence. Men are not dispensable. Neither are women. But we really need to start owning the conversations now, bringing about the actual change than just talking (or even writing) about it.

At the recently concluded Women Writers’ Fest organised by SheThePeople, Sonu Bhasin, Group President at Axis Bank made an urge to call out the sexism and stereotyping, however innocuous it may seem. She shared an anecdote of how a male colleague after concluding a board-room meeting suggested that they call for some tea and coffee, and promptly went on to look at her expectantly. That Sonu stared back at him defiantly was heartening to hear, and much worthy of the applause the hall resonated with.

To note that even the top management, women who’ve broken the glass ceiling and have managed to procure a seat at the big table, also encounter instances like these was surprising. One would think men at such positions would be more aware and progressive. But as it increasingly became evident – this sexist stereotyping exists not just in homes and in lower or middle management, but in every situation where there’s a man and a woman. It permeates through and exists across industries, professions, management levels, and even at social gatherings.

I’ve lost count of the number of times I’ve been asked to help with serving snacks at home or at the workplace just because I am a woman. This assumption that the woman should serve the food and beverages is a classic example of propagating stereotypes. It’s the reason why working women are still expected to manage the home and do housework after a hard day at office while their male counterparts reach home, put their feet up and settle down in front of the TV. The message that women should refuse to promptly jump at the opportunity to do the womanly things – cut the cake and serve it or to arrange for tea/coffee and biscuits was heard loud and clear.

‘Don’t do this – just don’t play to the stereotypes,’ Sonu urged.

She’s right! It’s time to now effect the change. Ask the right questions. Raise a voice. Make sure you ask for help when you need it. Establish a women’s support group just like boys have their boy gang. Don’t flutter your eyelashes when someone calls you a pretty head. Don’t smile when advised to get married soon. Don’t just sit back quietly when a male colleague cuts you off mid-conversation; instead ask him to wait until you’ve finished speaking. Take offense if you’re asked how you manage work and home. And should only women have to manage both anyway?

And men, c’mon, surely, you’d like to be treated as more than just sperm-producing machines. So step up and clean up the misogynistic mess that your ilk have created. Do what you can do and not what women can’t. Do the laundry. Cook food. Rear a child. And not just when (or because) you are bachelors but also because if you’re sharing your lives with someone it’s fair to share the work-load too. Many men are already part of the feminism movement. Join them. Don’t dismiss women’s concerns by saying ‘It’s that time of the month, na’ or ‘It’s okay, she’s always a bitch anyway’ or ‘You’re overthinking it.’ Don’t pass judgements about how a woman got promoted. Speak up for equal pay and equal opportunities. Remember to respect a woman’s choices and decisions. Stop telling her what to do, who to be, or even who she is. And just don’t stop there. Call out on the sexism in other men. Even better, trash those stereotypes – whether at work or at home.

As the panel discussion on women at work came to an end, it was evident that the impact of these talks and on-stage discussions into significant actions, albeit small, had already begun. And while that’s cause for some cheer, the journey to bringing a change has only just begun. Let’s keep up the pace.