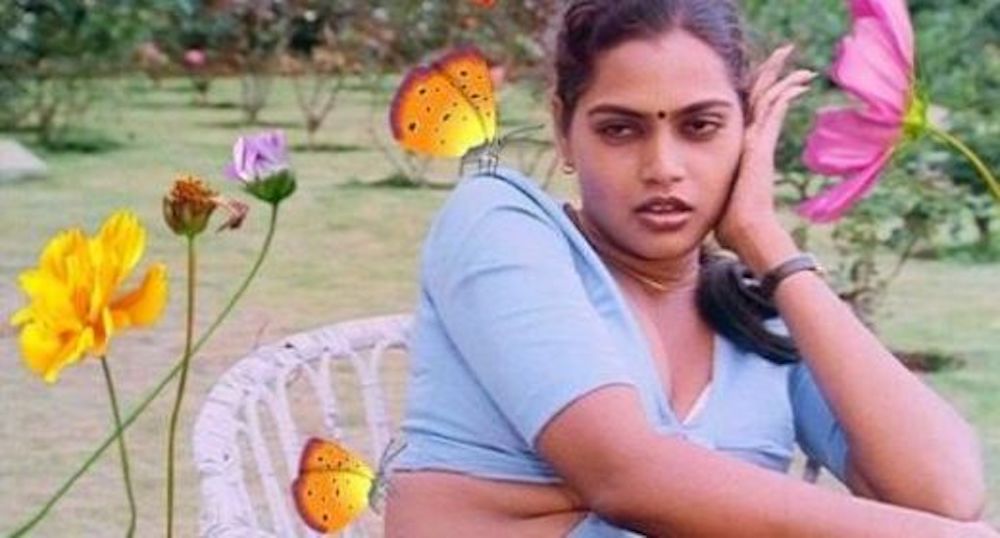 Vijayalakshmi Vadlapati, better known as Silk Smitha, thought herself a badass woman, yet she chose death at the age of 35, leaving her dreams unfulfilled.

“You’re only given one little spark of madness. You mustn’t lose it” – Robin Williams, American Comedian who battled depression and hanged himself at 63.

Born on 2nd December 1960, Vijayalakshmi Vadlapati is known by her screen name Silk Smitha. She had to end her education at age eight due to economic constraints. Given her stunning beauty and sensuality her own family pushed her for an early marriage, only to be abused by her in-laws and her husband.

Bollywood had already made a movie on her – “Dirty Picture” casting Vidya Balan as Silk Smitha; where it showed that she ran away from her matriarch’s house. The fact is she fled from the clutches of the torture and humiliation rendered to her by her loveless marriage and landed in Madras (Now Chennai). She shared a tiny apartment with her aunt and also had the passion to dream big. She started her career as a touch up artist for veteran actresses and starred in small character roles when she was noticed by Vinu Chakravarthy, who groomed her, taught her English, and gave her the onscreen name Smitha. It was only after the megahit movie Vandichakkaram and her outstanding role in the film, a new feather was added to her name “Silk”. It was her screen name in that movie which later became her identity – Silk Smitha.

Call it her vulnerability, instead of focusing on character roles she took to roles which featured her as a cabaret dancer, seductress or a vamp. Given to her coruscating sex appeal she found that these roles are indeed pigeon holes for her.

A wall flower by nature, Silk Smitha was often mistaken as a rude woman, but deep in her she had a child – like innocence, was punctual, zealous but equally had a temper management problem.

Having featured in Malayalam, Telegu, Tamil movies she also featured in Kamal Haasan and Sridevi starrer movie Sadma, where she played Soni, the wife of Somu’s boss. Somu was played by Haasan himself and as per her typecast she acted as a seductress, revealing her thighs, trying to allure Somu, only to be ignored.

It’s actually a harsh truth that she was indeed ignored in her real life was well; she was a woman no one ever loved but wanted her only for their needs.

To name some of her films: Vandichakkaram, Ranga, Sadma, Seethakoka Chiluka, Avasara Police 100, and many more, though she did not receive any award in her short acting stint, except the remark that she is a sex bomb.

It was the instant success that got to her head from the roles she featured in; she started treating her producers and directors like suds, she turned abusive towards the press and media, she also turned disrespectful to her own colleagues, and her addiction towards alcohol increased; little did she realize she was turning into a victim of depression. To the world she was a scintillating figure and she felt that she could be a producer soon herself, but deep in her was the loneliness which was gradually taking an upper hand.

In her interview with Filmfare she was asked, “There has been a lot of criticism about you in the press. That success has gone to your head. That you are very discourteous and disrespectful in your dealings with film makers and co-artistes. Any explanations?” To which she replied, “These are malicious allegations made against me in magazines which claim to be film magazines but are actually purveyors of yellow journalism […].They have accused me of treating my producers and others badly. Now, that is totally untrue. If it were true, then nobody will be casting me in their films […].Just about 4 years and in this time I have acted over 200 films. Naturally, there must be several people who are jealous of my success. I think it is such people who are behind all this malicious propaganda. They’re trying to damage my reputation”.

A deeply religious woman like many Indians, she too prayed and had a temple at her home. A lonely woman who thought of producing movies only to be burdened by debts. Her ultimately death fetched several controversies – Was she lonely? Did success make her a loony? Was she depressed? Was it love she looked for? Was it the money?

Reveals Kannada Actor Ravichandran to TOI “I was busy shooting that day (September 23, 1996) and was surprised to see Smitha trying frantically to reach me a few times. I tried to speak to her, but the call never got through due to poor connectivity […]. However the next day, to my horror, I realised that Smitha had killed herself. I shudder to think what could have been the reason for her call. This haunts even me now.”

A beautiful woman who had her roots in a poor family, bore the brunt of maltreatment by her in-laws  and husband, ran away to dream big only to kill herself and die a lonely miserable death.

She was never given fair treatment when she lived, but is only remembered after her death and that too as a sex symbol, not as a woman who needed love. Bollywood made a film on her; it would have been better if they could have taken her for treatment, if possible extend an understanding heart. Dirty Picture was a big hit, but behind that movie was a woman who died at age thirty five.

Reports India today where her brother said “It was made on Smitha’s life, barring some modifications to suit the film. The only difference is that contrary to the vulgar and cheap manner in which Balan’s character has been depicted, my sister led a dignified life off screen. In the film, Balan’s character is a smoker and an alcoholic, who has several sexual liaisons. Smitha was never like that in her real life.”

As a human I ask a question to that brother “Where were you, when she needed you all, you pushed her for an early marriage, did you ever think how she dealt with all of it alone? A young vulnerable woman who needed a kind heart, some words of encouragement, why were you silent? She was a part of your family, your own blood.” One cannot deny the fact that she was a good actor — a little mentoring could have moulded her into a stunning actress instead of a crumpet who took her life.

Marilyn Monroe has said, “Being a sex symbol is a heavy load to carry, especially when one is tired, hurt and bewildered.”

Success is a difficult diction. For some success is to have a home, for some only to get good grades, for some to have a great family and the list is endless. But there also another eerie factor which crawls behind success, the deadly curse depression. It is known for its success in taking life, turn a person into a victim of mental illness and if untreated can end a life.

Today, on her birthday, let’s remember Silk Smitha. She wanted to live, yet chose death.

Let success not get to your head, it’s a delusion; it will ruin you, be humble, be kind, and be gentle. There are cases of celebrities committing suicide unable to bear the contradiction of their hey days and the later downfall. Some turn mentally ill, some take to alcohol, some get hooked to drugs leading a caged life of their own mental demons and some succumb to suicide. Two have been cited in this essay and let the world not increase the death toll by suicides. It’s a life gifted by God and you have no right to take it.

Seek help if you are depressed, confide your feelings to someone you trust, release your agonies and once released you will heal. It’s your life, take the tide and say Happy Journey to the roller coaster ride called life. People will judge you anyway! Do not pay heed, focus on what you love, follow it fully and do it completely. Respect everyone and also have self-respect. Lead a healthy life with a head held high. We all will die one day for sure, but let that be natural; just know you are a fighter, you belong.

Image source: is a screen grab from the movie Sadma