Satyavati in the Mahabharata is painted as a gold digger who ousted Bheeshma from his heritage, but she was also an unusual woman ahead of her times! 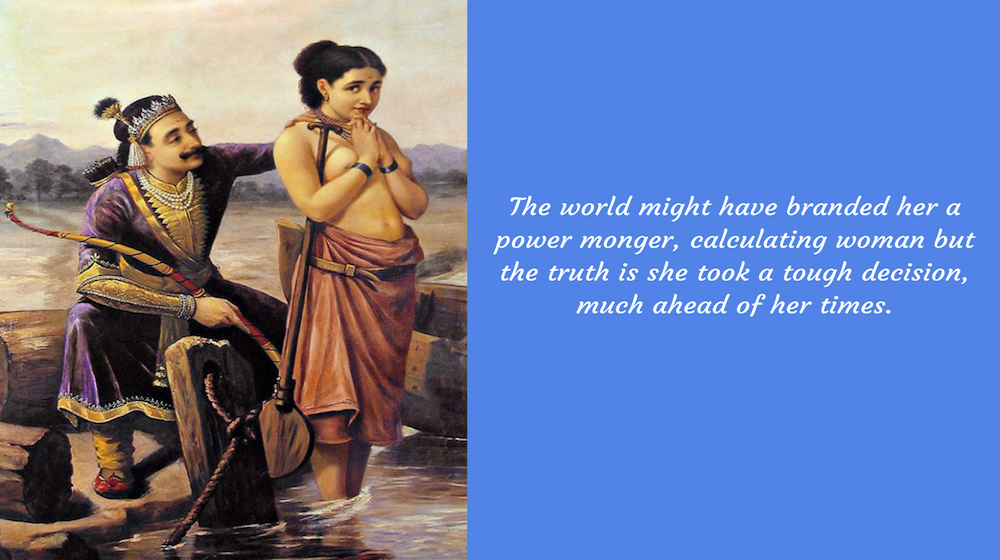 Satyavati in the Mahabharata is painted as a gold digger who ousted Bheeshma from his heritage, but she was also an unusual woman ahead of her times!

In today’s times, if a woman discovers her husband is infertile, she has many choices. She can opt for divorce and remarry or she can use the services of a sperm bank and IVF treatments. She can also adopt a child. Similarly widowed women these days are encouraged to remarry and begin life afresh. But thousands of years ago in the ancient patriarchal society of India, a widow was usually burnt with the funeral pyre of her deceased husband. It had the sanction of the society.

In those times there was one character in the Mahabhrata who turned the tide of traditions. She twisted the rules in such a way that she saved her two daughters-in-law from ‘Sati’ and also prevented a revolt in her kingdom. Though the world looks at her with prejudice as a shrewd stateswoman who was power hungry and manipulative. This woman was Satyavati, the great grandmother of Pandavas and Kauravas.

She was also the mother of Mahabharata’s author rishi Vaishampayan, who later got famous as Ved Vyasa.

Satyavati was the biological child of Chedi King Vasu born to an apsara Adrika. A fisherman had raised her. When Hastinapur’s king Shantanu saw her, he got drawn to her musky body odour. He was enamoured by her beauty and proposed to her. The fisherman was apprehensive that the king would soon forget her. He accepted the proposal on one condition- her sons alone could be the kings. This condition was an injustice to Bheeshma, Shantanu’s first-born, so he refused. To convince the fisherman, Bheeshma took the oath of lifelong celibacy. Satyavati comes across as a gold digger to the reader.

Two sons were born to Satyavati and Shantanu. But fate had different plans. After the demise of Shantanu Bheeshma appointed Chitrangad as the king of Hastinapur. Young Chitrangad died in a war with a Gandharva. Second son Vicitraveerya was seated on the throne. Bheshma abducted two sisters Ambika and Ambalika to marry him. Seven years after the marriage, Vichitraveerya passed away childless.

Satyavati was left with two widows and a celibate stepson. The throne of Hastinapur was vacant. She feared the news of their king passing away childless would trigger revolt and disintegration. Pregnant women were forbidden from Sati. She decided to use the practice of ‘Niyoga’.

The ‘Manu smriti’ (code of conduct for Hindu dharma) allowed a special concession to childless women whose husbands were infertile. She could request a family member to impregnate her. The family sanctioned it. Total secrecy was observed to protect the honour of the woman. It was considered an act of duty and not of lust or sin. Satyavati decided to use ‘Niyoga for her widow daughter-in-laws. She convinced her daughter-in-laws for it. The news of pregnancy had to be announced with the declaration of the emperor’s unfortunate death. There was little time.

It was a twist of fate that Satyavati requested Bheeshma to break his vow just once to provide an heir to Hastinapur. Bheeshma refused to go back on his promise.

It is then Satyavati disclosed to Bheeshma she had a son prior to her marriage with Shantanu. She confessed how Rishi Parashar, one of the seven sons of Brahma had travelled in her boat and spent a night with her. His son was born sometime later and he like his father had taken to ascetic life. If he permitted he could be summoned since he was a blood relative too.

Bheeshma agreed. Ved Vyasa honoured his birth mother’s urgent plea and reached Hastinapur at the soonest. He had roused out of deep penance. He had lived the hard life of the woods. His appearance was rough. Sporting an untidy beard and unkempt hair, the mendicant was a contrast from the well-groomed handsome royals. There was no time to waste on grooming. As the practice of Niyoga prescribed, the ugly saint was smeared with ghee (clarified butter) and sent to the queens’ chamber.

Ambika the first queen was terrified to see the ghost like man sent to her. Resigned to her helplessness and to get over with the unpleasant experience, she shut her eyes. Ved Vyasa left her room and informed his mother that if she conceived a blind child would be born to her. Ambalika the second queen was filled with dread and turned pale. Satyavati was informed that the child would be born with a congenital palour.

Satyavati tried to convince Ambika to ccoperate one last time. Ambika was reluctant and sent her parlour maid to the room. The maid had grown up with common men and women, so Vyasa was not so repulsive to her. She cooperated with him and conceived too. Ved Vyasa predicted birth of a wise son to her.

As predicted the three women gave birth to blind Dritrashtra, Pandu and the wise Vidur. Instead of getting burnt alive the queens got a comfortable and respectable life in the palace raising their future heirs of the Kuru clan. Satyavati managed the kingdom peacefully with Bheeshma’s help and averted a revolt.

Ved Vyasa wrote the truth of his mother. The world might have branded her a power monger, a calculating woman, but the truth is she took a tough decision, much ahead of her times.

Doctorate on teenage pregnancy, published research papers with Medical journals. Articles for Reader's Digest and newspaper. Blogger at parenting and relationship websites. After having taught at school and college levels, currently employed as Independent read more...

Savita Halappanavar: The Indian Woman Who Paved The Way For Ireland To Repeal Its Abortion Law!

Give Me My Due - As A Homemaker, I Refuse To Work For The Peanuts You Toss Me!

And The Flamingo Took Flight [#ShortStory]

For The World To Believe In A Special Child, The Parents Need To Do It First