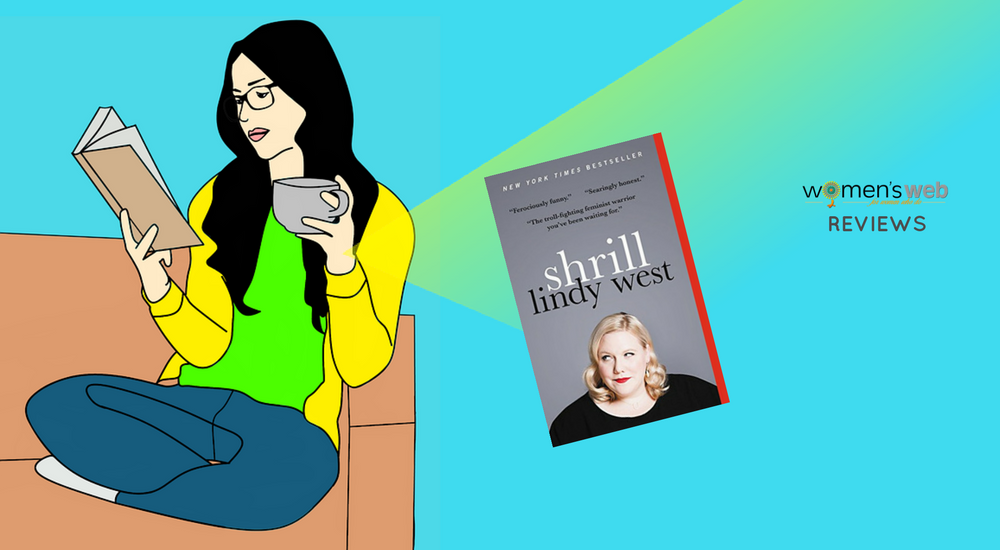 What a roar of a book! What a shattering, piercing, on-the-face memoir! Lindy West has tore apart every apologist notion to shreds, in her screaming memoir Shrill.

Introvert, always trying to fit in with a body type unacceptable to societal standards, with a gender looked down upon as weak since centuries, (which has gradually started gaining its deserved acceptance only now at a really crawling pace), Lindy West was a child hidden inside a cupboard for years. This memoir is West’s journey from a shy, under-confident child, to a razor-sharp, self-loving, accepting, fat-feminist woman, in a world where both the empowering “f”s are subject to incessant abuse.

Lindy, very hilariously, starts with general examples of fat women from fiction. She talks about Mrs. Potts, Marla Hooch, Miss Piggy, Auntie Shrew and with these and some more examples, throws scorching, eye-hurting light on the general image of fat women in the society.

She gives various anecdotes about her life as a fat girl. She refuses to euphemize anything about her weight because she believes euphemizing means being uncomfortable with it. She unwaveringly reclaims “fat” and “woman” – both unapologetically.

She goes on to talk about puberty, myths associated with menstruation, the debates associated with abortion, her body dynamics as a woman and as a fat person, comedy which has spiralled down for the sake of cheap, edgy laughs, shallow casual misogyny (to look cool). She talks about how fat is always construed to be unhealthy by people who aren’t even her doctors or know her medical reports, about insecure internet trolls and their psychology, about the academic research that tells loads about such trolls, about how “stigma” raises its ugly head when comedians don’t realize that they are confirming the worst fears of some real life rape and misogyny victims, while they are just trying to joke around a little about how powerful comedy is.

An oppressed can joke about his oppression but can an oppressor joke about the oppressed when he doesn’t even realize the repurcussions of that oppression?

She says “Satire is a weapon of powerless”. She quotes Molly Ivins wonderfully – “When satire is aimed at powerless, it is not only cruel – it’s vulgar”.

West desperately calls out this need to have more men and women to speak up about feminism. Ironically, the men and women who deny the need of it, listen to the male authority when they speak about it most of the times, while conveniently torturing the women making exactly the same points.

In a poignant chapter, she speaks about her father and his slow death by cancer and in the next chapter she speaks about an internet troll feeding on this tragedy of hers, creating a parody account in her father’s name, calling himself an “embarassed father of an idiot”.

Her attempt to talk back to this troll, resulted in a surprise apology from that troll that went viral, forcing the then twitter CEO to issue an apology for not acting on reports, and taking full responsibility of building a credible and safer social media platform. Of course the promises, like any others, went spiralling down after a few days. What she learnt, however, is that even though talking back for reformation of the society is a slow process, that doesn’t mean the talks have to stop.

Personal thoughts after reading the book

I have been fat-shamed plenty of times. I was told once by an ex that if I do not reduce my weight, he’d feel embarassed to introduce me to his parents. He felt embarassed to introduce me to his friends. That was my chance to recognize the underlying stupidity of his demand. When you mock or humor fat people, you think you might motivate them to become “normal”. Let me say this, mocking or deriding is NEVER motivational.

I have been shamed as a woman many times. Another person told me once, that as a woman it is my duty to keep my household always cheerful. Even if I have issues, my face should always glow with a smile that when the MAN of the house comes home, he must feel blessed to have me. Let me just say, this theory is quite shitty. Being a woman and being a human are not two mutually exclusive things.

I have seen rape apologists and misogyny apologists saying, “this was just a joke ya, just chill”. Let me say this, that you are joking about someone’s trauma and if anyone has a right to make a dank joke about it, it is only the person who has undergone that trauma.

The above are just 3 incidents. Millions of people are undergoing millions of such incidents every single second as we breathe.

It takes a lifetime to build confidence into a self-loathing individual. As humans it is our duty to choose which side we are on.

I might have got carried away but the cause is close to my heart, and I believe everyone of us should have at least one cause close to our hearts. There is simply so much more to say.

Some thought provoking quotes from the book

The real scam is that being bones isn’t enough either. The game is rigged. There is no perfection.

In a certain light, feminism is just a long, slow realization that the stuff you love hates you.

If you are leveraging people’s trauma for laughs, the least you can do is look them in the face. Why make art if you don’t have a point of view?

Puberty was a fancy word for your genitals stabbing you in the back.

We simply must talk about abortion. The fact that abortion is still a taboo subject means that opponents of abortion get to define it however suits them. They can cast those of us who have had abortions as callous monstrosities, and seed fear in anyone who might need one by insisting that the procedure is always traumatic, always painful, always an impossible decision. Well, we’re not, it’s not. The truth is that life is unfathomably complex, and every abortion story is as unique as the person who lives it. Some are traumatic, some are even regretted, but plenty are like mine.

Comedy, in particular, is a tremendously powerful lever of social change. When you talk about rape, you get to decide where you aim- Are you making fun of rapists? Or their victims? Are you making the world better? Or worse? It’s not about censorship, it’s not about obligation, it’s not about forcibly limiting anyone’s speech – it’s about choice. Who are you? Choose.

People’s personalities are negative spaces around their insecurities. Afraid of intimacy? Cultivate aloofness. Feel invisible? Laugh loud and often. Drink too much? Play the gregarious basket case. Hate your body? Slash and burn others so you can climb up the pile. We construct elaborate places to hide our vulnerabilities, often growing into caricatures of what we fear. When people know how go hurt you, they know how to control you.

Women, it seemed, were obliged to be thick-skinned about their own rapes, while comics remained too thin-skinned to handle even mild criticism.

I recommend this book vehemently because it is hilarious and eye-opening and extremely relatable.

If you’d like to pick up Shrill: Notes from a Loud Woman by Lindy West, use our affiliate links: at Flipkart, at Amazon India, and at Amazon US.