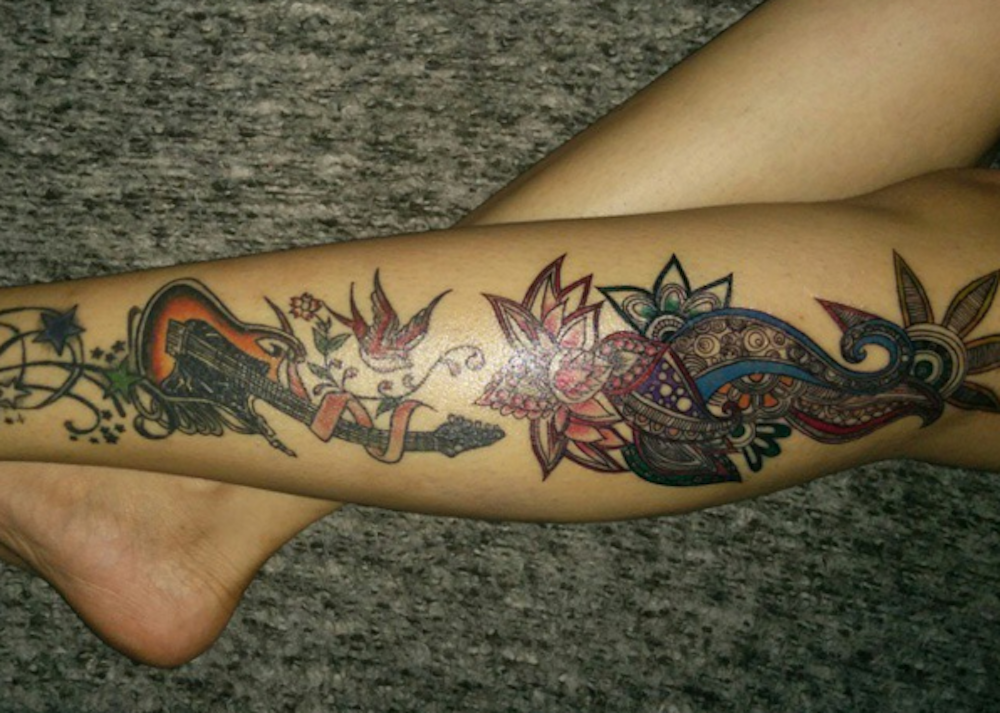 Getting a tattoo can be a very personal decision, and can be interpreted as a desire for freedom to own one’s body – maybe the reason why it is frowned upon.

When it comes to tattoos. there is much stigma attached to it. Even with the commonality of people getting inked these days, seeing a person with a tattooed sleeve will not stop people from glaring back. They still express a loathing disgust towards it. No matter how mundane and mediocre the concept of tattooing might have become, people still consider tattoos unprofessional and weird, and cast off tattooed individuals as an alien race.

Tattoos are a form of personal expression and not just some permanent ink on human canvas. It’s a matter of personal preference what one decides to get permanently drawn on their skin. So basically by calling tattoos unprofessional, they are calling personal expression unprofessional. People are denied jobs because they have a visible tattoo, they’re banned from certain services. My grandma could have a tattoo once, painfully etched into her hand decades ago, it was the tradition then. Remember the time when our priests and monks got tattoos on their foreheads, the time when they were considered sacred, accomplishments and trophies they wore on their skin? We are far from that now.

A couple of my friends have tattoos and they look beautiful. Some got them got them done for a purpose, others just got them done because they liked the concept of commitment. I have a few tattoos myself. Yet because of the stigma attached to it, we don’t go around showcasing our art to avoid answering a hundred meaningless questions.

What surprises me is the way people ask, “What does your tattoo mean?” Tattoos might or might not have any meaning. They could be anything you like. It could be a memory, a word, a simple cartoon or something that you find cute. Why does one need to have a reason for anything they like, for their expression?

I was a girl scared of needles too. Even a short visit to the doctor pushed me into fearful trauma of undergoing the nightmare of being pricked by needles and seeing my own blood. So a few years back, when I was old enough to take my own decisions, I decided to get a tattoo to get rid of the phobia.

I got some veiled stars done on my ankle. It was painful but pretty and of course worth it because in the end, I wasn’t scared of needles. In fact I was more inclined towards the idea, the art and beauty of it. Here’s a snap I found somewhere in my folders- Soon after this one healed, I wanted to get some more. It took me almost a year before I could decide what to get. So well, unlike the first one, this one hardly holds any meaning, except for the fact that I liked playing guitar. I also got the first one redone this time. And now I was determined to get a leg sleeve, I knew that another tattoo was in line. Well, my artist sensed it and he even reserved the dates for the next one. Smart fellow! The next tattoo was magnificent. I got a swan, which goes by the name I identify myself with on social media. My artist decided to incorporate some mandala for a change, great job I must say. Here’s a picture right after I got it inked- Now you might be wondering how it looks like altogether? It looks beautiful and I don’t seem to get bored of it even after so many years.

Does it shock people? Yes, it does. And it makes me feel different yet funny as I look back at them and smirk away.

What do I say when they ask me the meaning of it? Well, you wouldn’t understand unless you get one done (as I hand them my artist’s card). Good luck folks, get a tattoo and carry it with pride.

It’s a certificate of your long term commitment, which many people are scared of.

It the proof of the pain that you’ve been through.

It’s the evidence of your love for simple things as trivial as a feather.

Mothers, Tattoos And More – The Hilarious Story Of How I Got My Mum To Agree To My Tattoo

Some Extraordinary Women Empowering Tattoos That You Should Try