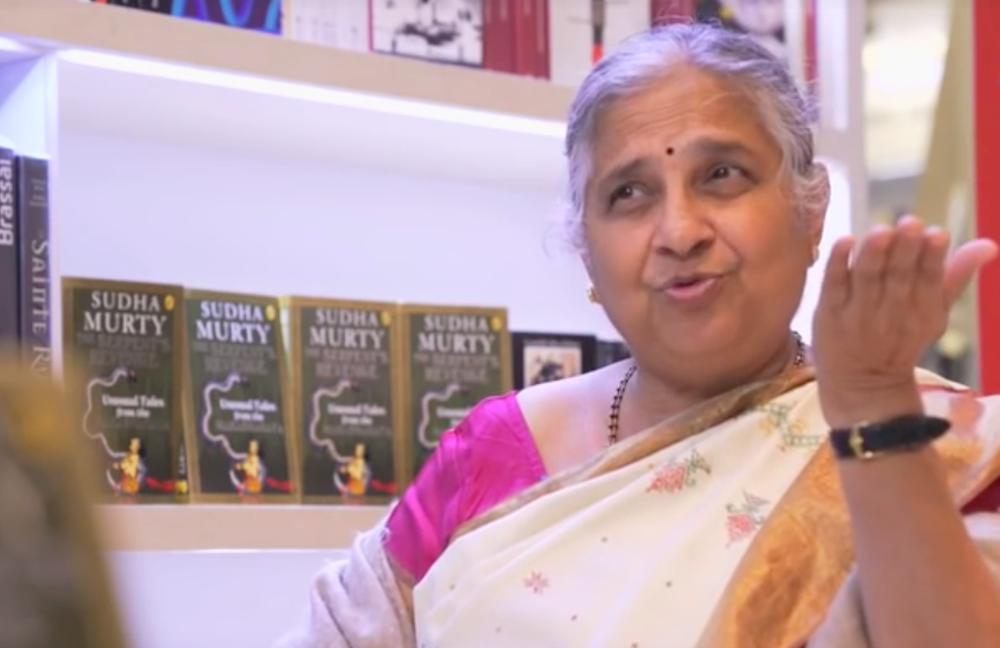 Just as wearing Western clothes is a choice, so is sticking to Indian clothes. Sudha Murthy does not need to justify her choices and neither do any of us.

Sudha Murthy needs no introduction! She is surely a woman of substance who is a successful entrepreneur, an author, and a great philanthropist. She is a simple woman who has spent her entire life for the progress of humanity. She has aspired herself to work across the globe to fill the vacuum of disparity and inequality in society.

I moved to Bengaluru more than a decade back and got to know these names through Infosys – the IT giant of the city. Narayana Murthy and his wife Sudha Murthy have left no stone unturned to establish such a big empire. Apart from their identity as entrepreneurs, their simplicity and admirable drive to work for humanity make them distinct.

Personally, I’ve read many books written by Sudha Murthy – both fiction and non-fiction. To be very honest, I was extremely fascinated by her real stories of philanthropical work across the globe. She has always given her best and has gone to many extremes to help others. Those positive stories gave me a real picture of Sudha Murthy which talks about her grit, determination, and simplicity towards her life. The glitzy lifestyle never attracted her. Surely, what matters most are our thoughts, kindness, ethics, and love for others. Even I’ve believed in these principles throughout my life. For me, it doesn’t matter what you wear, what matters to me is how you are as a person.

Well, Why I am writing so much on this simple lady who is also a feminist? This is all because of the recent incident which disturbed me to the core. Again, we have a woman who was questioned due to her choice! An educated and well-known figure was humiliated due to her simple salwar- kameez in the Heathrow airport.

As reported in the media recently,

“Go and stand in the economy class queue. This line is for business class travelers,” a well-heeled lady told Sudha Murthy at the International Heathrow airport in London.

The chairman of Infosys Foundation was at the airport wearing a salwar kameez, which perhaps made her a misfit in the queue in question.

Later, the lady who advised her attended the same meeting where Sudha Murthy was the chief guest for her philanthropy work. The same woman who was so worried about her attire came in a simple khadi saree to suit the theme of the meeting.

A few months back, I wrote an article about the outfit of a person/her choice and why she should never be judged for it. The crux of the matter or one can say, what matters the most is how you shine as an individual with your work and thoughts.

At large, this has become a common perception where women who are comfortable with Indian attire are taken as less educated and ‘cattle-class’. There have been many instances when women raised their voices when they wanted to wear clothes of their choice but why have we missed talking about those who are much more comfortable in a simple salwar- kameez or a saree? After all, this is also a choice!

It can be easily seen how these wrong mindsets have not even spared even someone as great as Sudha Murthy. What if she was wearing a simple salwar-kameez? Does that mean she is not a human being who can travel in business class?

Or does she really need to be decked up in a highly expensive silk saree just because she is traveling in business class?

I wonder when things will change and who can bring about this change in the mindset of people? Are we really going the right way? Development and modernization are liberating us in parallel to emphasise our humanity and not to degrade it with time.

Isn’t it better if we respect each individual irrespective of what they choose to wear? What should matter is how the person is as an individual. What if someone is very flashy in style but has no sense to respect others? Would she/he be considered a better person than the one who is simple yet helpful, and respects you?

I think that we need to let it be a personal choice what to wear rather than humiliating people on account of their choices.

Once again a much-spoken line, “A book can never be judged by its cover.”