If a woman doesn't want to dress up, and is happy being her natural self, why do we call her a behenji? 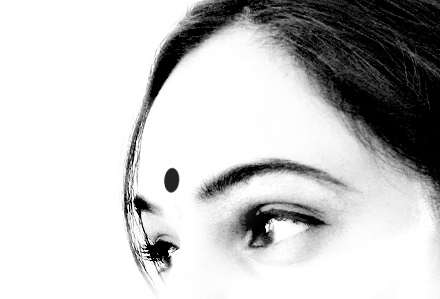 Prashila is an aspiring writer from Goa, who also happens to be slogging at a daytime technical job which is miles away from these apparently artistic aspirations she harbours. A “hopeful cynic”, she longs for the day when every child in India will have two complete meals to eat and a permanent school to attend.

I recently visited a jeweler’s shop to get a second piercing done on both my ears. The idea had been making its rounds in my mind for quite some time now, but it never materialized, mainly due to the fear of the pain that would ensue with the methods that would be employed to undertake it ; but with my parents for company, I finally decided to just “go for it”, considering how I wasn’t getting any younger and the skin on my earlobes wasn’t getting any softer.

My mother explained my requirements to the jeweler man and he gave me various options , but being the generally unadventurous person that I am, I was on the verge of developing cold feet. The jeweler jumped in cheerfully, “Why? In your Goa everything works doesn’t it ? All sorts of weird fashions? ” My parents smiled politely – this was meant to be a joke , one that demanded a smile , but my father went ahead, “She doesn’t live in Goa anymore, she lived in Bombay before and now lives elsewhere .” The jeweler ‘Oh’ed in response. This wasn’t the first time I was being judged and indirectly christened a “behenji” based on my appearance. My earliest memory (I am sure there are many such incidents prior to that , but I have possibly not paid attention to them) dated to my first year in college when some of my close friends  and I were seated on a bench near our college bus stop waiting for the bus to take us to the nearest town’s bus station . We were all barely 17, dressed in decently tailored salwaar suits, our longish hair was tied in plaits/pony tails , some of us wore glasses and all of us wore flat sandals and were completely unpretentious. Enter a few second year students , terribly bored and frustrated with the general lack of  ‘quality’ female presence on the campus. Needless to say, they hardly spotted us for the longest time even as we were worried with the possibility of them still using us for some silly and uninspired ragging , but when they did get to the bench and the connecting bus turned to be later than usual, their bored eyes must have begun to rove around and finally must have stopped on us .

“FEs re hi , auntyo kashi distaat marei”, I suddenly heard one of them say in Konkani (this loosely means ‘These are First Year students… they look like aunties man’). The others probably must have stopped at this point and looked at us too and then universally stamping us with behenjihood , considered us unworthy of any further comments or glances. I chuckled as a 17 year old would and told my friends who chuckled along.

Since then there have been multiple instances when completely unknown people have commented on my lack of ‘grooming’ and lack of ‘fashion’ and yet the gleeful sadist in me refuses to transform myself from an ugly duckling to a sparkling swan.

We as a planet are extremely looks conscious, often judging a person by how well he or she is dressed and how straight a woman’s hair is and how fair and lovely her complexion is. All the rest of their qualities and accomplishments take a backseat in view of their appearance. In fact we all know how the last couple of decades have seen an unprecedented growth in people willingly spending hoards of money in self grooming even to the extent of getting “under the knife” and having parts of their skin crafted and re-crafted to get that perfect nose , the perfect pout , those perfect thighs and what not.

Naturally, people like us stand out as a sore thumb, the aunties, the behenjis, the simpletons, the ones who to put it in very, very simple words are just ‘being themselves’.

Strange! Because in the self-help/motivational section of any bookstore, one can find so many glossy written ‘self-help’ books which are peppered with sentences like , ‘Love yourself the way you are , be comfortable in your own skin and be comfortable with yourself rather than doing what others do. Listen to your heart and be yourself ‘ etc. Ditto with so many motivational speakers. I knew this way before anyone ever told me and contrary to what the jeweler man thinks or the second year boys think , I don’t or would not want anyone to consider  me or others like me any lesser to a smartly dressed woman/girl with salon treated hair and an immaculately made up face.

I’d rather age gracefully and look my age at all points of my life than try to be someone I don’t want to be and if and when I do want to do something different, like piercing my ears for a third time (and I did successfully get them pierced by the same jeweler after successfully overcoming all my apprehensions), I will go ahead and do it.

Till then and beyond, more power to us behenjis and more power to the people who continue to remind us that we are behenjis. As Kurt Kobain, the iconic late frontman of the grunge rock band Nirvana  famously said , “I’d rather be hated for who I am than loved for who I am not”.