“…there is nothing wrong with you. Nothing! Except your sheer unwillingness to spend time with me or – cook a half-decent meal – on the pretext of having a headache!”

Here is the fifth winner of our May 2017 Muse of the Month contest, Deboshree Bhattacharjee.

“Do you always have a headache?” He looked at her coldly as he asked her this, and watched as she yet again applied some pain balm on her temples. “Or is that pain balm intended just to repel me? You know I detest that smell.”

“For reasons best known to you. The headache has always been a woman’s most potent weapon, they say.”

“And you have been spending far too much time reading up silly jokes about wives on WhatsApp groups.”

They glared at each other, a nightly ritual. She looked away first, and switched off the lamp by her bedside.

“So you are sleepy now? Whatever happened to the plan to watch a film?”

“I have a headache, Manav, in case you had forgotten.”

He gave a snort, and plugged earphones into his ears. He could very well see the film alone.

Sheila hadn’t been lying about the headaches. They had always plagued her, but lately, they had become a menace. Her eyes were quite fine; she had got them checked fearing that her spectacles needed to be upgraded. Perhaps it was a seasonal thing; winters and the lack of sunshine always made her feel heavy-headed.

She tossed about in bed that night, unable to sleep. She watched it get light outside and heard the first sounds of the morning come to her ears – the old woman across the street who always vacuumed at dawn, the toddler who cried his heart out when his parents woke him up for school, and her next door neighbour’s dog getting the household ready for his walk.

“So, how’s the headache?” He asked mock-jeeringly, when she served him breakfast later that morning.

“Much better, thank you.”

“I thought it would be better in the morning, anyway, after you could see me away for the entire day.”

She looked at him, amazed at the easy manner in which he made these remarks. It hadn’t always been like this. When she used to complain of a headache earlier, he would ruffle her hair, massage her temples, offer to cook dinner. He would ask if she needed medicines, if she wanted a hot-water bag. And if she had had a sleepless night, he would see through it no matter how fresh she tried to look after a shower and a change of clothes.

She watched him leave for work, her thoughts strained and distressed, both from lack of sleep and from the turn she could sense her life had taken.

“Have you seen a doctor to get your headaches tested? I mean, what if it’s something more serious – like a tumour or something?”

Her best friend from school, who also happened to live in the same neighbourhood, had come over for tea. She hadn’t changed much since school, her face still retaining the fresh schoolgirl liveliness, and her manner still energetic and lively. Sheila, on the other hand, seemed to have aged far beyond her actual years. Her hair had started greying already and she was losing a lot of it too, on her pillow every day.

“Yes, I have. The doctor can’t find anything wrong. He says it’s just a tension headache that has no real cure except minimising stress and unhappiness.”

“How strange! But surely you are not stressed or unhappy. Are you?”

She winced. “Of course not.”

“Right. So you just keep taking pills or what?”

“I try to avoid them. But yeah, when the pain gets really bad, I do.”

“Isn’t Manav worried? He should take you to see a specialist. Sometimes, these little things can mean more serious problems deep inside…”

That night, when her husband came home, she took up the matter with him.

“I have been thinking about these headaches, Manav. I had Kajal over for tea today and she thought we should see a doctor about them.”

“As if it wasn’t enough to deal with you and your imaginary headaches, you now have another woman telling me what to do! We went to that doctor last month, did we not, and there is nothing wrong with you. Nothing! Except your sheer unwillingness to spend time with me or – cook a half-decent meal – on the pretext of having a headache!”

He went on, throwing his socks and files helter-skelter, upsetting things on the center-table.

“I am dead tired of your silly excuses day after day. What do you even do but watch television all day long? You are lazy to the bone! I am glad our infertility treatment didn’t work out, even though I squandered so much money on it. You would have been an utterly useless mother!”

She stared at him disbelievingly. Did he really mean all that? This, after she slaved in the kitchen to entertain his sudden, but very important guests from work, headache or no headache. This, after she gave in to his forced advances in bed even when her head was boiling. When she had silently listened to all that her in-laws had to say about her “barren” state. They had made it clear – they didn’t want an adopted child, an outsider. They would somehow resign themselves to this “error” in judgment they had made while fixing the alliance.

He had been silent through it all. Slowly, his embraces ceased being loving, but started being short and purely sexual. His complaints over her cooking intensified. His criticism about her day job became harsher, till she was forced to quit. And amidst all this, her headaches had grown and grown till she could barely remember one night when she had gone to sleep without one.

And suddenly she knew. She knew what was causing her headaches and she knew how to put things right.

Manav and Sheila now live apart. They have mutually decided to give each other space and time to recover from the bitterness and apathy, and see if they could ever live together again. Her headaches are now fewer and farther between. They had been, as the doctor had told her, tension headaches. Night after night of going to bed unhappy, and lying about without sleep, had made them really bad. She had needed solace and reassurance, and had found none. It was finally the knowledge and acceptance of her disintegrating marriage that helped her take a stand. She taught herself to accept this knowledge without blaming herself for all that had happened. She also taught herself, though this was decidedly harder, to not blame her husband. Perhaps, they were just not right for each other.

Yes, there is sorrow in being left alone. In being torn from a relationship you had set such high hopes from, and realizing it was actually a sham. But sometimes, in being alone there is also love – and understanding – for yourself. The understanding that you, above all, deserve freedom in life and don’t need to rot in a relationship that offers nothing but pain.

It had taken a series of headaches to teach her this. They had been really painful headaches too, full of helplessness. But today, as she sat with her face to the sunshine, after waking up from a peaceful night’s sleep, she was glad of those headaches.

Deboshree Bhattacharjee wins a Rs 250 Amazon voucher, as well as a chance to be picked one among the top winners at the end of 2017. Congratulations!

Image source: By Sasha Wolff from Grand Rapids (Can’t Concentrate: 14/365) [CC BY 2.0], via Wikimedia Commons, for representational purposes only. 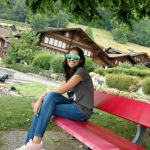 Stories delight me and I tell them often. My happy place is one where I

I Am Not A Quitter! [#ShortStory]