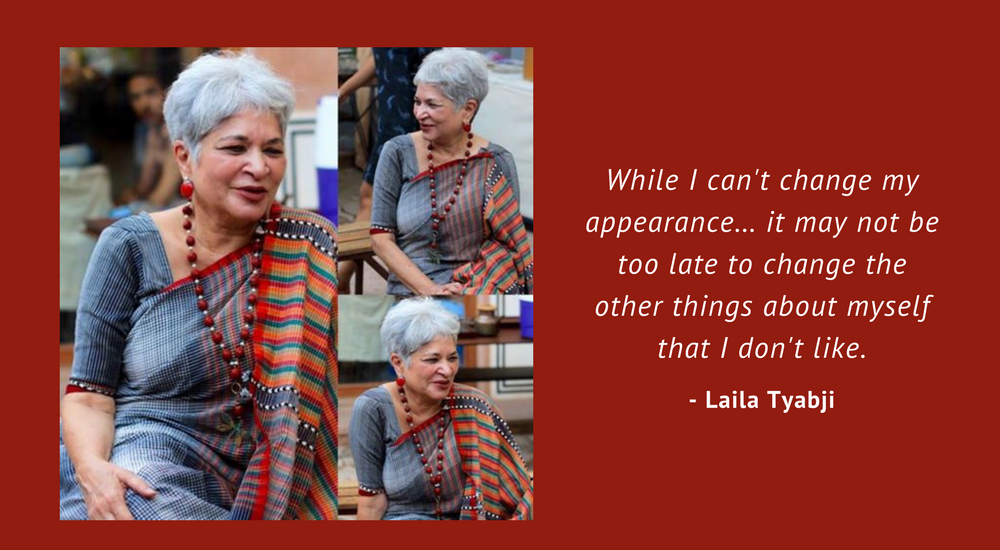 In an age where everyone is trying helter-skelter to look more younger, Laila Tyabji’s views on aging gracefully are truly inspiring!

If there is anything behind a face, that face improves with age. Lines show distinction and character: they show that one has lived, that one may know something. — Karen de Crow

In 1979, a young Harvard psychology professor named Ellen Langer realized something astonishing — and true. “Without knowing someone’s chronological age, science cannot pinpoint how old someone is.” And indeed it is true. It all depends on how an individual accepts and deals with the mental and physical changes when the clock is ticking away. It is important to distinguish between ageing and old age. Ageing is the process of growing old while old age is a phase. Ageing is a universal and lifelong reality, from our first breath to our last breath.

Laila Tyabji, the face of Dastkar for over three decades, talks about the process of getting old in her recent Facebook post. The post starts with, “Wow, I am 70!” Doesn’t this expression sound familiar – the sudden realisation of age and how far we have come in life, no matter what age we are at! Yes, it is terrifying. What is even more terrifying is the fact that instead of embracing ageing, we are continuously bombarded with anti-ageing products and tempted by youth restoring plastic surgery. Ageing gracefully isn’t always easy, but one’s attitude towards ageing is what matters the most.

As the dust settles down, we gradually realise that accepting the inevitable and growing with it is the most satisfying thing to do. Change is the only constant, accepting it and moving ahead gracefully is the basis of human happiness. As Laila Tyabji says, “I FEEL the same, & life has taken no sudden turns, plunges or plateaus. But little things signpost the transition from middle to old age. Electricians & delivery guys call me Mataji instead of Aunty. Everyone in authority looks very young, & most seem rather ignorant! In turn, the young either ignore us oldies or treat us with nervous awe; annoyingly amazed that one is conversant with electronic gizmos & the Internet, able to crack jokes – in fact in possession of most of one’s marbles.”

If young women have no positive connections to the aging process, it’s going to be terrifying. Instead, let’s accept and help each other to be fundamentally happy just the way we are.

The Ageless Grace Of Those Who Grow Old With Positivity

I Lost 2 Family Members To COVID: Things To Know About Getting Convalescent Plasma