The father and daughter bond plays a great role in how confident the daughter will be as a teenager or an adult. The first part of a 3-article series on this. 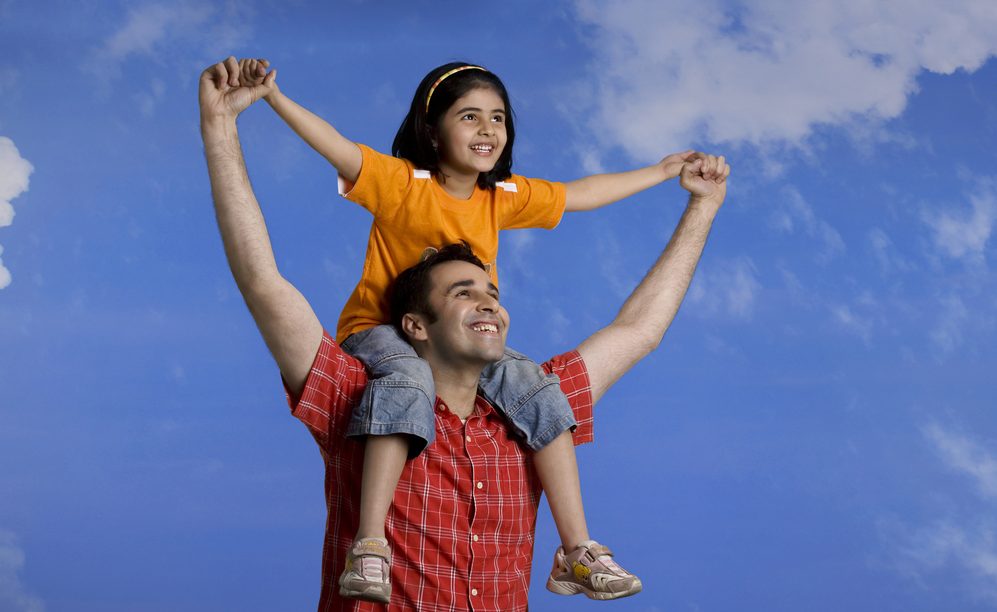 The father and daughter bond plays a great role in how confident the daughter will be as a teenager or an adult. The first part of a 3-article series on this.

“I don’t want to compere in the school annual day.”

“I don’t want to learn Karate. It is too hard.”

Does this sound like your teenage daughter? As a mother, you might have dismissed her fears as normal and labelled her as ‘shy’ or ‘scared’ or ‘uninterested’ or ‘vain’ or ‘fussy’ or simply ‘impossible’. Well, she may or may not be all those labels you gave her. Or your teenager daughter might be dealing with issues of low self-esteem typical of so many other teen girls her age.

Most teenage girls’ self-esteem takes a beating at puberty. Your once spirited girl of 7 or 8 years who was roaring with confidence has now mellowed down. Like a wounded tigress who lost in a big jungle battle!

Such seemingly innocent statements as the above will lead your daughter to doubt her actions and capabilities, slowly but surely turning into low self-esteem. If not dealt with, these negative thought patterns will keep resurfacing and haunting her well into her adulthood.

Self-esteem is a major determinant of success in life – be it personal or professional. It is defined by how an individual evaluates their own value and worth. How they feel about themselves is reflected through their behaviour, words and actions.

Pay close attention to your teenager. A teenager with a high self-esteem is usually independent, takes on responsibilities and challenges readily, tolerates frustration fairly well, handles emotions maturely and always helps others. On the other hand, a teenager with low self-esteem does the drastic opposite – they shy away from challenges and responsibilities, blame others for their failures, pretend to be emotionally strong and indifferent, self-deprecating of their worth and talents, feel neglected and unloved, are unable to tolerate even the slightest frustration and are easily susceptible to peer pressure and influence.

So, how can you build your teenage daughter’s self-esteem?

There have been increasing studies and research to prove the connection between a healthy father-daughter relationship and a teenage girl’s self-esteem.

As a society, the spotlight has always been on the mothers and their undisputed supremacy in the area of parenting. And rightly so! But often unfairly so… at the critical cost of the father’s role in parenting. There is a largely prevalent misconception that the role of a father is a non-issue and his absence from his children’s life is completely justified. Especially for daughters.

At the same time, it is also true that today’s Dads are more ‘hands-on’ than ever before in their daughter’s lives. Be it changing her diapers, brushing her hair into pigtails, pushing her in the pram, teaching her to swim or play basketball etc! However, once his daughter attains puberty, it is the mother’s turf now. Many fathers make the crucial mistake of backing off after their daughter’s puberty. Failing to realise that it is NOW that they are most needed in their teenage girl´s life.

Fathers have the greatest impact on their daughters’ self-esteem.

Several scientific studies have proven that the father’s active role in his teenage daughter’s life affects the way her nervous system is wired. His presence greatly contributes to her overall health –  physical, intellectual, emotional and spiritual.

Here are some specific areas in which a father majorly impacts his teenage girl’s life. We shall look at these in 3 consecutive articles on 3 consecutive days.

When your daughter sees that her father treats you and all the women in his life with love, pride, joy and respect, he is essentially teaching her to perceive her own self-image in a similar positive way. They see their mirror image in their father’s eyes. Daughters of respectful and encouraging fathers and husbands will firmly believe in their strength and value as a woman.

Different from Self-esteem, Body Image is how we view ourselves physically.

Dr Margo Maine, a clinical psychologist and author of the book, ‘Father Hunger: Fathers, Daughters and the Pursuit of Thinness‘ clarifies, ´Daughters of fathers who are emotionally distant are more likely to struggle with issues around food and weight.´

Usually, fathers are very uncomfortable talking to their daughters anything about their bodies, leave alone about Body Image. They also feel incompetent and inadequate talking about the subject. But they must and should approach it fearlessly and normally. It is a good idea for Moms to pitch in here to support and guide the Dads. Fathers should avoid commenting negatively about their wife or daughters or about other women (no referring to ‘that fat woman’), any form of body shaming, and more importantly the way he himself views and talks about his own body image.

Teenage daughters of loving and appreciative fathers exhibit positive behavioural traits. They usually grow up to be well-adjusted, balanced and confident women. On the other hand, women who take the path of depression, substance abuse and psychological problems are the outcome of negligent fathers.

Studies have proven that daughters who communicate regularly with their fathers in a healthy positive way are freely able to articulate and express their thoughts, feelings and emotions. They are able to communicate socially with both men and women with equal adept and ease.

Your daughter will seek qualities of mutual love and respect in her own relationships if her parents shared a similar bond. Fathers set the tone for their daughter’s relationships with all the other men in her life – friends, colleagues, lovers, spouse etc. It helps her gauge all her relationships with men, especially the platonic kind – the healthy boundaries to maintain and how she views men and expects to be treated by them.

5. Importance of Hard Work and Persistence

One of the ‘magic’ fathering styles called ‘authoritative parenting’ was recently seen in the ‘Haanikarak Bapu‘ character from the Hindi movie ‘Dangal’. This fathering style is loving and warm yet comes with a strict accountability to rules, practise and responsibility. Fathers are most effective when they have a close relationship with their daughters yet that delicate balance of setting appropriate rules and granting appropriate freedom.

Daughters with a strong bond with their fathers score higher in complex subjects such as advanced math and science and excel overall in academics. Their academic confidence and self-motivation levels are very high.

Women who have broken the glass ceiling barriers and found in high ranking jobs across the industry, academia and sports give credit to their father’s support. They cite their fathers for having been positive and nurturing mentors, having raised them to be tough and assertive. A skill which has helped them to sustain and thrive in highly competitive environment.

Science proves that daughters of absent and negligent fathers experience an early onset of menstruation. When a young girl is not getting the attention, love and affirmation from her father, puberty is triggered prematurely. This is her body’s subconscious and heartbreaking reaction to attract the love and attention of other men in place of her biological father. Early onset menstruation poses a greater risk of developing heart disease for women in their later years.

We conclude the first part with this endearing short film Papa which reinforces the message that behind every strong woman is a loving and dedicated father who believed in her.

Stay tuned for the next part, where we will be focusing on some easy and fun action steps for fathers to help boost their teenage daughter’s self-esteem.