Bigotry in the form of sexism, casteism, racism, or any other 'ism' needs to be tackled by understanding the insecurities behind these beliefs, not just by calling it out. 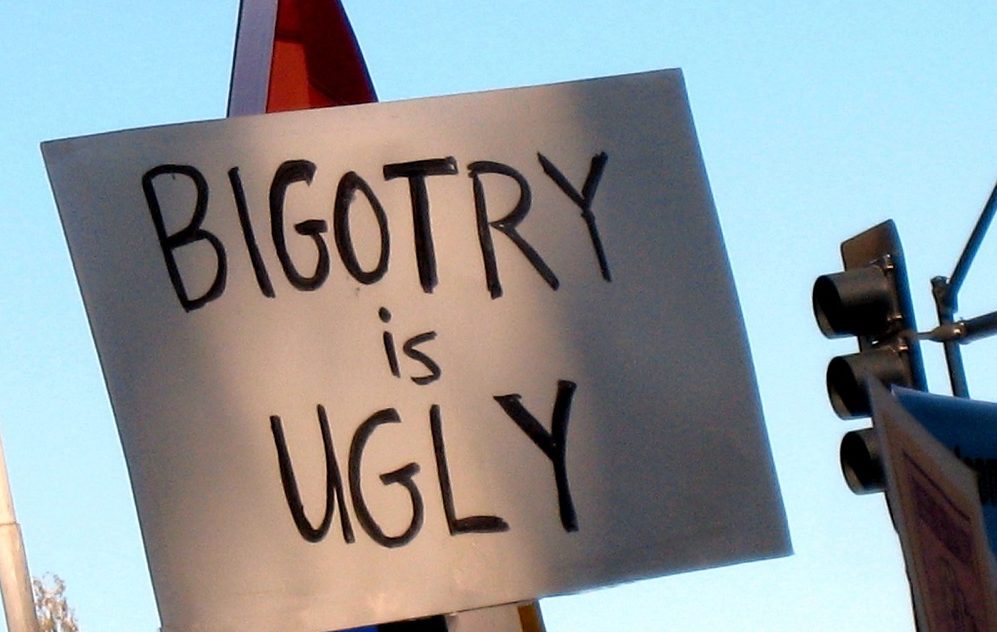 Bigotry in the form of sexism, casteism, racism, or any other ‘ism’ needs to be tackled by understanding the insecurities behind these beliefs, not just by calling it out.

Bigotry is on the rise in some parts of the world. Be it in the form of racism, sexism, religious intolerance or something else. People are becoming more comfortable with publicly expressing harsh hostile opinions directed against certain groups.

On the other hand there is panic among those who have grown up to despise bigotry as well as among the targets of bigotry. Such people are worried about an increasingly intolerant world where they already are or eventually might be victims. This reminds me of a famous poem:

The above poem calls for people to speak up against bigotry before it is too late. It asks people to stand up against injustice even when it does not, directly, affect them, because intolerance can only increase in it’s exclusivity and some day will affect everybody. Others claim that silence or neutrality is passive compliance, summarised in the catchy phrase, “If you are not with us, you are against us.” Call a spade a spade says Thomas Essel.

I am not proposing that it is pointless to fight bigotry. Absolutely not! I am just suggesting that a more effective strategy needs to be employed, than mere name calling.

It might help to control our righteous anger, and try to understand the cause of bigotry in the particular case, and address it. For example people tend to be most bigoted when they feel threatened or insecure. Those insecurities must be addressed not just in abstract terms of the overall economy or ethics but in ways that might help them overcome their personal fears.

Logic does not always work, especially when assumptions and priorities are different. However an appeal to empathy, whilst showing empathy may be a way to start. People’s opinions can rarely be changed overnight and patience is the key. Engaging in constructive discussion, acknowledging grey areas and working through practical issues that cause fear and insecurity, are all steps in the right direction.

Also an effort can be made to separate the general and the specific. Human beings have a tendency to extrapolate from small sample sizes of personal experiences. We remember the experiences with stronger impact better. So normal, expected, or even mildly pleasant interactions are often forgotten while bitter ones leave a lasting impression skew our extrapolations. So when someone takes to bigotry because they are smarting from a bad experience, it may help to remind them of previous pleasant or normal interactions they have shared with other people from the same group. Personal stories strike an emotional chord and can bring back much needed perspective.

Religious groups are typically heterogeneous with different people following various religious customs and practices to different degrees. Almost every religion has age old practices which are considered archaic and even inhuman today. Today, a religion is usually criticized for it’s most extreme practices which are only followed by a small fraction of its followers.

However bigotry against a particular religion tends to paint all the people belonging to that religion with the same broad brush stroke of extremism. Moderate or open-minded practitioners of the religion get upset with repeatedly being considered monsters or fools. Eventually out of frustration or lack of available compromises they identify with the extremists, thereby increasing the number of extremists. Counterproductive and self fulfilling!

Bigotry is despising an entire category of people who share a single characteristic or belief, often by accident of birth. Sometimes it is because of disconcerting differentness of the appearance or customs typical of the group. It may be possible to overcome this type of bigotry through regular exposure to individuals from the despised group, and slowly growing to like some of those individuals thus humanizing the group rather than thinking of them as an abstraction.

Sometimes bigotry arises from threatening situations like a large influx of refugees or extremist violent organizations that claim to be the voice of a much larger group. In this case too, association with individuals from the group helps separate the problem from the people and then one can focus one’s energy on finding a constructive solution to the problem rather than despising a whole category of people.